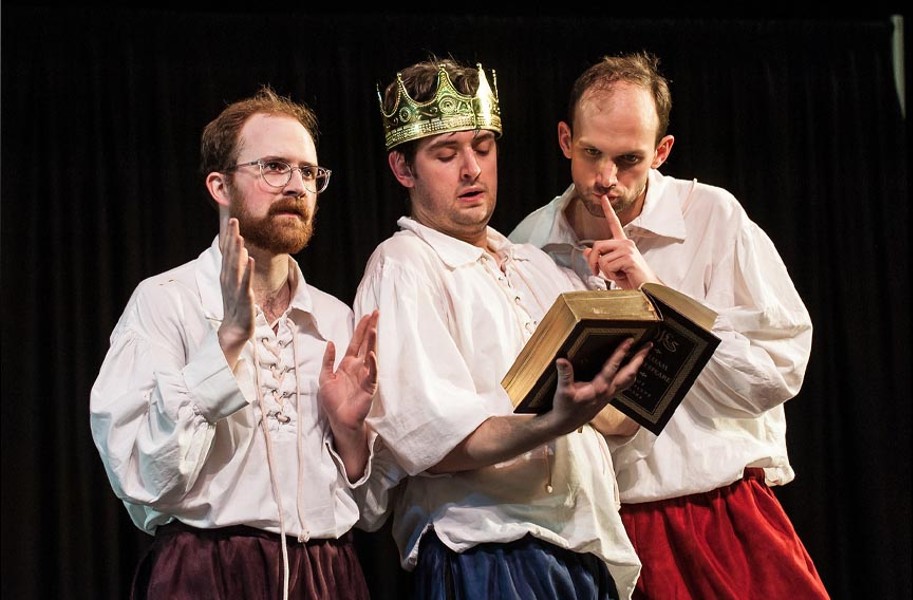 Aaron Sutten Actors Dixon Cashwell, C.J. Bergin and Joseph Bromfield use their own names while embodying character types in “The Compleat Wrks of Wllm Shkspr: Abridged.”

High-school drama kids in the mid- to late ’90s were likely to cross paths with the Reduced Shakespeare Company’s play, “The Compleat Wrks of Wllm Shkspr (Abridged),” or “The Complete Works of William Shakespeare (Abridged).”

Written by Adam Long, Daniel Singer and Jess Winfield, the company first performed the play at Renaissance festivals as a truncated version of “Hamlet,” inspired by Tom Stoppard’s “15 Minute Hamlet” from 1976. It gathered a following over the years and grew to include light-hearted parodies of all of Shakespeare’s work. In 1996, “The Complete Works of William Shakespeare (Abridged)” opened at the Criterion Theatre in London.

Quill Theatre’s production pays homage to the era of the play’s inception, playing ’90s hits in the theater before and after each act, from such bands as Smash Mouth, the Goo Goo Dolls and the Beastie Boys.

One of the things I love is how the production maintains its ties to the ’90s era while updating a lot of the humor. A joke that depends on a reference to Prince includes a quick and appropriate acknowledgement of his passing. A Justin Bieber gag sneaks in and, in response to some unsolicited audience commentary, a little timely political humor.

Speaking of audience participation, there’s a lot of it. Actors break the fourth wall constantly to address the audience and sometimes invite people onstage. This offers great potential for unexpected twists and turns, and it’s bound to be a new and different experience each night.

Director Maggie Roop has fully realized this play’s ability to appeal to Shakespeare fans and critics alike. The cast is excellent. Actors use their own names, while embodying character types who assume the roles in each of the plays they parody. Dixon Cashwell is perfect as the Shakespearean scholar, while Joseph Bromfield plays straight man to C.J. Bergin’s childish, misinformed, cold-footed and cross-dressing Shakespearean novice.

All three actors demonstrate a strong sense of physical humor, and there is genuine chemistry among them. In the few moments in the script that allow actors to deliver honest performances of snippets of Shakespearean monologues, they prove that they aren’t only excellent comedians but also skilled, serious players with a depth of understanding and respect for the Bard’s work.

As far as production value, this play can work well with minimal attention to light, sound, props and costumes. That’s what makes it such a popular choice for high-school drama clubs. But this production, though still sparse as the script demands, goes above and beyond with some period garb and Catharine Dent’s smart lighting cues.

Audiences should expect a fun-filled, high-energy performance that requires no prior knowledge of Shakespeare — but it might make you wish you knew more. S