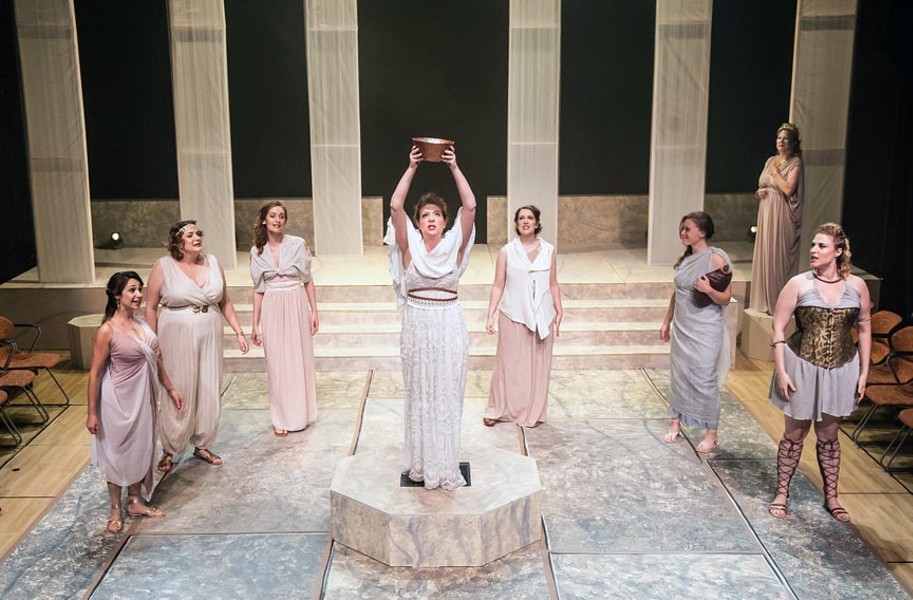 Women using sex to gain power: It’s a tale as old as the patriarchy.

Many are already familiar with the premise of Aristophanes’ classical Greek comedy, “Lysistrata,” in which the women of Greece make an oath to abstain from sex with their husbands and lovers until the men put an end to the fighting, once and for all. Under Lysistrata’s fearless leadership, the women seize the Athenian Acropolis and proceed to use their feminine wiles to overpower soldiers and to excite and sexually frustrate their husbands.

Director James Ricks, who also adapted the 2,500-year-old play for this production, mentions in the show’s playbill that “Lysistrata” was likely viewed as a laughable absurdity in its own time, so far from reality was the very idea of women wielding such power. But the Quill Theatre production attempts to recast the comedy, presenting the idea of women in power as ideal instead of ridiculous. Ricks’ adaptation is just as funny as the original, with updated language and modern cultural references. Here, the men are clearly the butt of the joke.

This production boasts notable comedic performances. Maggie Bavolack nails every sexy one-liner as Kleonike. Grey Garrett’s Lysistrata is elegant and majestic, even as she smirks at her own raunchy jokes. Rachel Rose Gilmour is playfully seductive as the bashful Myrrhine, who joyfully teases her husband, Kinesias, played by Adrian Grantz. Jeff Clevenger is a comedic treat as a goofy Athenian magistrate.

Ricks’ direction strikes a balance between the classical and the modern, capitalizing on physical humor and clever wordplay while nodding to ancient Greek theatrical conventions, including the use of masks, poetry, song and dance.

Andy Mudd’s set design transforms the Libby S. Gottwald Playhouse into an ancient Greek amphitheater, and Maja E. White’s lighting is simple and effective. However, Cora Delbridge’s costume design disappoints. The women’s dresses look like modern clothes draped with shawls and sheer fabric, giving the faint impression of a college toga party. And while I enjoy the humor of Molly Brandt’s silly, exaggerated phallic props, illustrating just how tortured the men become as a result of the sex strike, I can’t help but wonder why that same sense of humor is so notably absent in the scenes surrounding women’s bodies.

Upon learning that this production includes bawdy humor and nudity, one might expect to see something akin to a burlesque show: teasing sexuality, delivered with a knowing sideways wink. But the nudity in this production is handled with a strange sense of gravitas — a drastic and uncomfortable tonal shift from the rest of the play.

Ricks' choice to shift abruptly from jocular sexuality to predatory sexuality in a scene where a beautiful, silent woman (Peace, played by Terrie Elam) stands stone still, naked and expressionless, atop a pedestal — a voiceless object for everyone to ogle — is confounding. It renders the ensuing conversation, in which the men parcel out her body as though it were the very land over which they’ve been fighting, much creepier than I think it is meant to be, and it destroys the humor of that scene. Unlike the other women who volunteer themselves as sexual objects and clearly enjoy doing so, Peace doesn’t seem to be in on the joke, so the men’s lascivious comments do not come across as funny. It’s a confusing directorial choice, and I question the value of a feminist interpretation of this play if it ultimately culminates in female objectification. Ricks’ revised ending, which diverges from the original text in ways that further complicate the message of this production, adds insult to injury.

Audiences heading out to see Quill’s production of “Lysistrata” are in for an evening of raunchy adult humor with a political edge. I wish I could say that the gender politics are all just a part of the joke, but this show ultimately falls victim to the male gaze it mocks. S

Editor's note: This review has been updated by the author to clarify that it was "James' directorial choice to shift the tone abruptly between jocular sexuality and predatory sexuality" that was confounding, not the presence of the scene.