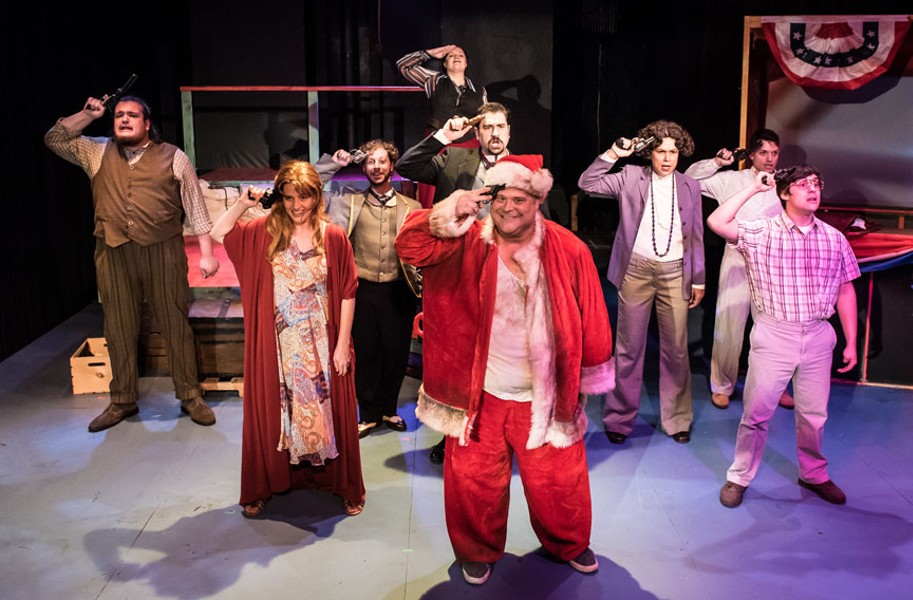 Theater geeks and history nerds don’t seem like natural compatriots. But the convergence of an impending presidential election and the popularity of Broadway’s “Hamilton” has prompted local companies to feature a textbook’s worth of history on Richmond stages this fall.

The language-centric troupe Quill finishes up the trend, before the focus turns to the holidays, with the production of its first musical, Stephen Sondheim’s “Assassins.”

Who knew so many people have tried to kill American presidents? The show features some well-known perpetrators, such as John Wilkes Booth (David Janosik) and Lee Harvey Oswald (Bartley Mullin), but also delves into the psyches of such marginal eccentrics as Charles Guiteau (Matt Shofner), who shot James Garfield, and Samuel Byck (Kenneth Putnam), who wanted to crash a plane into Richard Nixon’s White House.

The explication of each character’s motivation in addition to the historical particulars makes the show a fascinating, if inherently episodic, exploration of misguided, downtrodden and vainglorious variations on the American dream.

Sondheim and John Weidman, who wrote the show’s book, have crafted some stunning stage moments: The sight of a convicted assassin crowing “look on the bright side” while a noose is lowered over his head will certainly stick with me.

The show also effectively connects some of the individual plights to more universal themes. In a stirring and only slightly unhinged rant addressed at Nixon, Putnam as Byck derides “guys like you [who] piss all over the country,” channeling the anger felt against establishment politicians during this most recent election cycle and making palpable the frustration that so many Trump and Sanders supporters expressed.

The show is less successful providing a cohesive narrative to propel the story. Director Andrew Hamm wisely choses two exceptional performers to make the attempt. Stacie Rearden Hall is charming as the Balladeer who strings together the characters’ back stories with the idea that “everybody’s got a right to their dreams.” As Booth, the pioneer assassin, Janosik commands the stage and returns after his early scenes to taunt and seduce future aspirants. Both work mightily to squeeze the disparate interludes into a story but don’t succeed, particularly with the weird “recruitment” spin on the Oswald story.

There’s still much to enjoy in the individual stories. Portrayed as an odd comic duo, Bianca Bryan as Sara Jane Moore and Lauren Elens as Squeaky Fromme are highly amusing in their incompetent attempts to shoot Gerald Ford. Daniel Cimo and Levi Meerovich make intense impressions as Guiseppe Zangara and Leon Czolgosz, respectively, immigrants who killed presidents in attempts to sooth demons physical (Guiseppe) and political (Leon). Shofner elevates the delusional Guiteau into a genius of self-aggrandizement and his performance is both a musical and comedic highlight.

Hamm and his crew have created many very entertaining moments, but the whole somehow is less than the parts. While lacking the grand narrative sweep of a novel, “Assassins” still delivers the episodic joys of a good book of short stories. S

Quill’s “Assassins” runs at the Firehouse Theatre through Nov. 26. Tickets and information are available at quilltheatre.org.