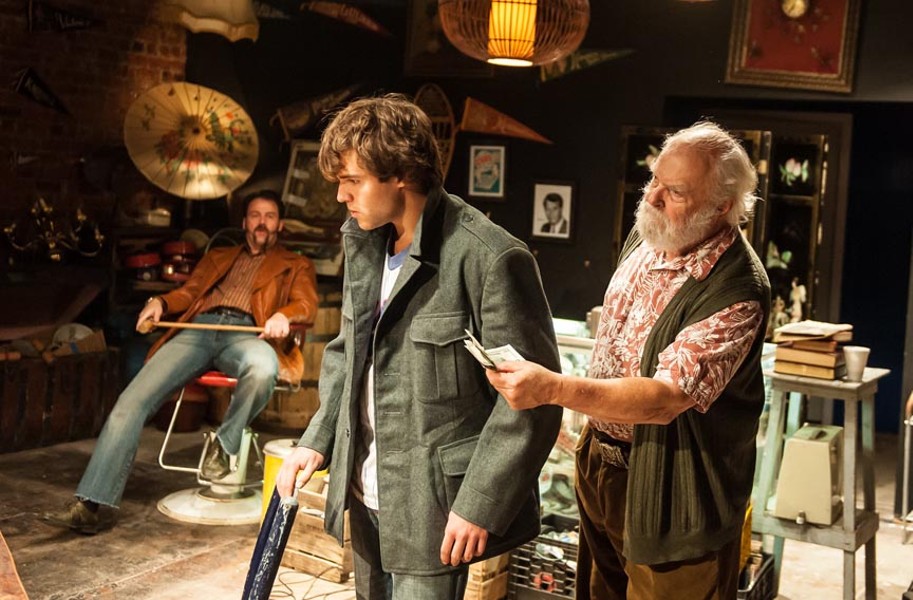 We live like the cave men,” Teach says in “American Buffalo,” and packed into the dark theater space of the Basement, you certainly feel it.

Even before Quill Theatre’s staging of the play begins, the audience has been transported back 40 years to the Chicago junk shop of Donny Dubrow.

Painstakingly installed and curated by set designer Vinnie Gonzalez, the Basement theater has been completely transformed with knickknacks and ephemera: Even the door to the playhouse now reads, “Don’s Resale Shop.” This is just the beginning of director Daniel Moore’s largely successful staging of the work that truly launched David Mamet’s career.

The play revolves around three men as they plan to rob a customer who recently purchased a buffalo nickel at the shop. Believing they were taken advantage of and wanting revenge, the men hope to achieve a quick score by breaking into the coin purchaser’s home. As in many of his plays, Mamet has constructed a surrogate family of men, and like in Arthur Miller’s “Death of a Salesman,” he uses this family dynamic to explore the negative aspects of capitalism.

This family’s patriarch is the kindly Donny (Alan Sader), junk shop owner and caretaker of the young junkie Bobby (Jesse Mattes). While they hatch a plan to rob the nickel buyer, their friend Teach (Jeffrey Schmidt) attempts to horn in on the action.

The trio lives on the margins, and for all their empty aphorisms about business, they’re the very people who will be forever ground down by the gears of capitalism. Like the junk that surrounds them, they’re the castoffs of American society.

Any “American Buffalo” production is only as good as its Teach, and Schmidt doesn’t disappoint. He stalks the stage like a caged animal, and seems able to take any piece of Mamet’s bitten-off dialogue and spin it humorously. His early macho bravado masks a ticking time bomb of anxiety that explodes near the show’s close (Note: If violence makes you queasy, don’t sit close to the stage.)

As Donny, Sader is a dim-witted believer in the American dream, thinking prosperity lies just around the corner. Donny isn’t as bright as Teach, and we can see the mental wheels turning while he tries to stay a step ahead of a friend who would love to remove him from the action entirely. Teach wants to cut Bobby out of the deal, and Sader does subtle work conveying Donny’s conflict over betraying his young protégé. Mattes’ Bobby is as cuddly and innocuous as the animal represented by his threadbare Chicago Cubs jersey.

With their Chicago accents, the three actors work wonders with Mamet’s challenging dialogue, and the first act comes off flawlessly. But as the wheels of their heist begin to fall off in the second act, the show loses some of its momentum and never fully recovers.

Still, the top-notch performances, excellent set and Mamet’s profane and funny script work their magic. As the play closes, we learn that like the proverbial buffalo, these men were doomed from the start. S