A bravura performance helps Virginia Rep's latest excel at the art of the con. 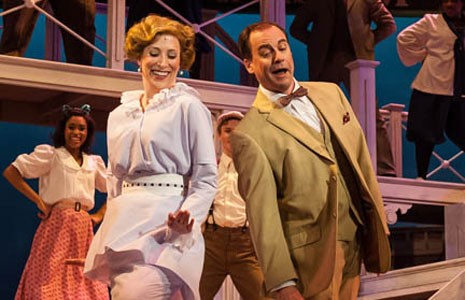 Few characters have such a firm grip on the American psyche as the con man. Whether it's Tom Sawyer convincing his friends to paint a fence for him, or Robert Redford and Paul Newman in "The Sting," there's just something alluring about watching someone turn the American dream values of self-determination and resourcefulness on their heads.

Composer, lyricist and playwright Meredith Willson seemed to realize this when he created "The Music Man" protagonist professor Harold Hill, a character who could have come from the pages of Mark Twain. From the moment Hill steps onstage he's conning the audience. While Willson imparts the character's back story in "Rock Island" — an impressive number that mimics the movement of a train — Hill is hiding in plain sight.

It's 1912, and Hill is traveling to a rural Iowa town to convince its residents to start a local marching band for boys. What they don't know is that once he delivers the instruments and uniforms, he plans to make off with the cash and move on to the next town.

Embodying this character in a bravura performance is Larry Cook, who seems born to play the flimflam man. Light of feet and smooth of voice, Cook flies across the stage while his character stays one step ahead of the town's various attempts to discover his con. Cook is flawless, exuding the trait that all successful confidence men must have in spades: confidence.

Gradually piecing together Hill's game is Marian Paroo (Amanda Johnson), the prim and proper town librarian who can't help but fall under his spell. Johnson sings sweetly and with longing in "Goodnight, My Someone," and holds her own in the dance numbers.

The supporting cast is equally impressive, and Virginia Repertory Theatre has rounded up some of the best talent in the city. Roles such as the tongue-tied Mayor Shinn (Joe Pabst), the over-the-top grande dame Eulalie Mackecknie Shinn (Debra Wagoner) and reformed con man Marcellus Washburn (Richard Koch) draw plenty of laughs. As the lisping kid Winthrop, Brandon McKinney is ridiculously cute.

Under Anthony Smith's musical direction and Leslie Owens-Harrington's choreography, the ensemble sings and dances admirably well. The footwork in such numbers as "Marian the Librarian" is particularly impressive. Sarah Grady's costumes are period appropriate, with the men looking dapper and the women in sensible and modest dresses. The set design by Brian Barker proves highly malleable to the show's various locations and allows for lightning-fast scene changes.

Among the many things that this production gets right, director John Moon should be lauded for hitting the tone spot-on. While the show is a light parody of the people of small-town Iowa, it's never mean in spirit. When Willson penned the show in the late 1950s, he was recalling a simpler time two world wars previously. After another five decades, it's nice to see that the con still holds up. S

"The Music Man" plays through Aug. 4 on the main stage at Virginia Repertory Theatre's downtown complex. Tickets and information at va-rep.com or by calling 282-2620.