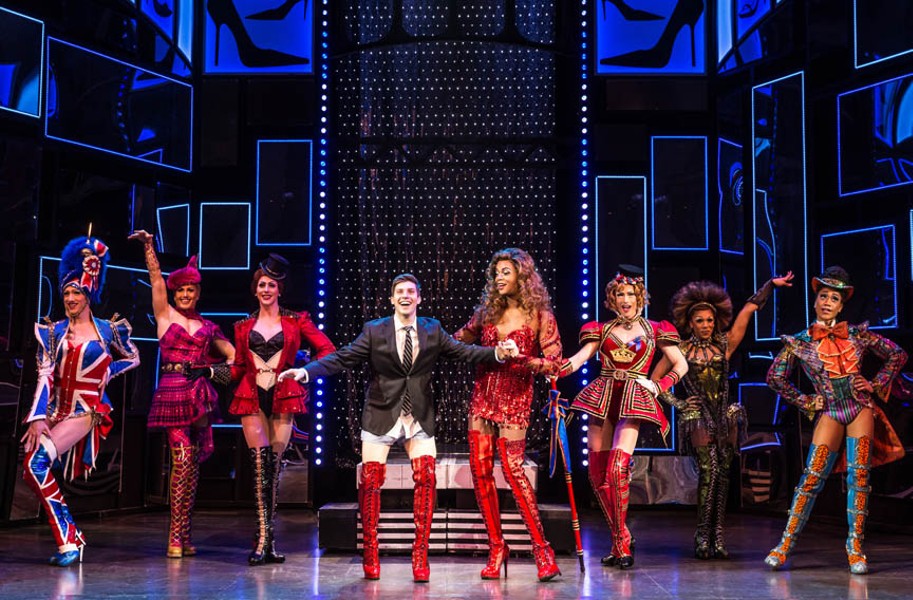 Matthew Murphy Based on a British film, the Tony-Award winning musical “Kinky Boots” features Curt Hansen, center, as Charlie in the touring production. The lauded music and lyrics for the show were written by ‘80s pop star and activist Cyndi Lauper.

When Rose Hemingway first told her mother that she'd be appearing in a show called "Kinky Boots," she could tell her mother was skeptical of the musical's name.

"She kind of grimaced," says Hemingway, who plays Lauren in the national touring production coming to town May 30. "I think she was a little concerned."

Luckily for Hemingway, her mother's concern was misplaced. When "Kinky Boots" debuted on Broadway in 2013 it racked up six Tony Awards, including for best musical and best choreography. Now, the touring production is making an eight-show stop at the Altria Theatre.

Inspired by true events, "Kinky Boots" tells the tale of Charlie, a man who suddenly inherits his family's failing shoe company after the death of his father. Determined to save the factory, Charlie comes across a drag queen named Lola and realizes an untapped market: stylish women's boots in men's sizes.

The idea might be crazy enough to work, but with Charlie's drag queen style consultant and blue-collar factory workers at odds, will the company's footwear make it to the Milan runway in time? As they say, you'll have to see for yourself.

"It's just a lot of fun," says Curt Hansen, who stars as Charlie. "It kind of runs the gamut of emotions, and the music is incredible."

The music — as wide-ranging as country, tango and funk — was penned by singer and songwriter Cyndi Lauper, and won a Tony Award for best original score.

"She really did a great job of telling this story through different styles," Hemingway says. "Across the board, I really think that they crafted something that's really special."

Hemingway plays Lauren, a factory worker who stresses the need for Charlie to figure out a way to save the company.

"She kind of gives Charlie the idea that he needs to find a niche market," Hemingway says. "About halfway through the first act, I start to realize that I have feelings for him."

As ludicrous as the plot might sound, Hemingway says the show has heart and a moral for audiences.

"It's silly and fun for sure, but I think people are shocked to realize that it has a deeper message," Hemingway says. "The overarching theme in this is one of acceptance and to be yourself."

While the iconic, red glittery boots used in promo shots appear in the musical, they aren't the only pair on stage.

"Every performer has their own specially made boots," Hansen says. "It's funny when a swing or an understudy who doesn't go on every night comes out. [It's always] a completely different boot than I've ever seen before."

With eight performances a week —and appearing onstage nearly the entire show — Hansen says that he's given up drinking for the tour and taken up being vegan. Most nights, he heads straight to the hotel room after the show.

As far as receiving odd looks for the show's title, Hansen says he's had his fair share.

"[People] just do double-takes, but then they don't ask follow up questions," he says with a laugh. "They just get a little nervous."

Recently, Hansen went on a road trip with two cast members and got a flat tire in Arizona. At a car repair shop in the middle of the night, someone asked what they did. One man was a little too interested.

"That's when I should just say I'm in accounting," he says, "not a show called 'Kinky Boots.'" S