Theater Review: Four-letter words and references to gay culture yield an earnest retelling of the New Testament in “Corpus Christi” 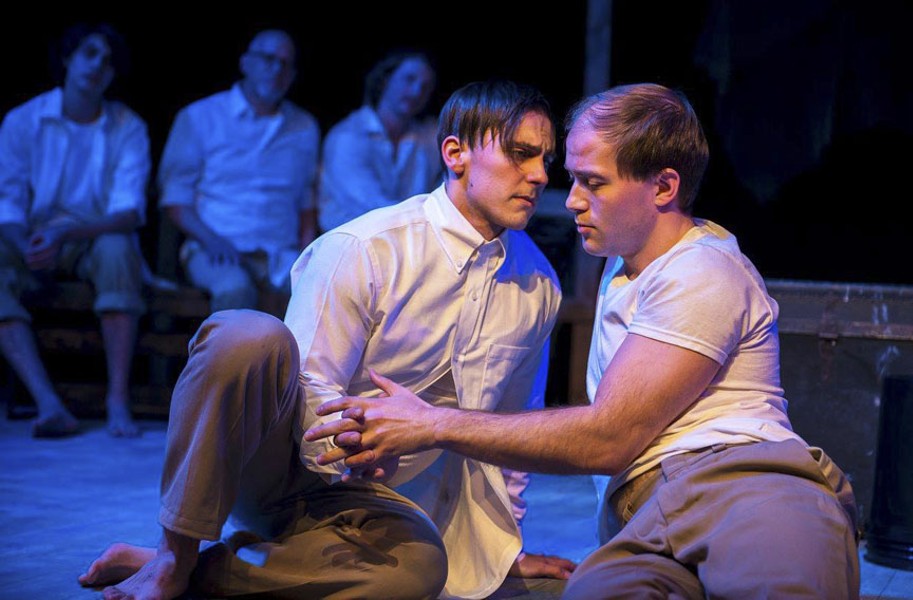 John MacLellan Actor Adam Turck stars as Jesus, or gay savior Joshua, and actor Chandler Hubbard is his lover, Judas Iscariot, in a play that our critic describes as “Godspell” for agnostics.

From the first time I heard the definition of an atheist, I knew I was one.

My mother responded well to the news — she told me I was grounded until I recanted — but my mind was set. Still, I was curious about the Bible, and though I'd read portions growing up, waited until college to read it from front to back.

As it turns out, Jesus is just all right with me. An examination of his actual words reveals a message of love, compassion and kindness that doesn't feel far from Buddhism. His message also seems to directly conflict with some Christian teachings, depending on the church, ones that condemn others, promote divisions or somehow conclude that Jesus wants to make his followers wealthy.

All this to say that I view Christianity through a different lens than most. And in the Richmond Triangle Players' "Corpus Christi," I've found my own personal Jesus.

Taking place in Corpus Christi, Texas, Terrence McNally's script retells the New Testament in the modern era. Joshua and his apostles are gay men who enjoy hitting the nightclub after a day spreading the gospel. Along the way, they contend with homophobes, angry Boy Scout leaders, appalled priests and Roman centurions.

Adam Turck stars as Joshua/Jesus, effectively portraying the pressure and drama of a bullied teen and his growth into a hunky gay savior. Through his journey, the story of Jesus takes on personal significance, and we're reminded just how revolutionary his ideas were when he spread them. The remaining 12 cast members inhabit many roles, but another standout is Chandler Hubbard as Joshua's lover Judas Iscariot. Hubbard has reliably portrayed many a sneering, unlikeable character in recent years; here he artfully colors in the shades of a similar, well-known figure.

Well-paced and balanced with occasional humor, director Dexter Ramey's production does excellent work shepherding the play from its campy opening to its powerful conclusion. T. Ross Aiken's set — a dock with the projection of water flowing below and a crucifix looming in back — simply but effectively evokes the show's New Testament themes.

When the show first premiered 20 years ago off-off-Broadway, the production received bomb and death threats. The funny thing is — and while I doubt it will be performed at many churches any time soon — its four-letter words and references to gay culture yield an earnest retelling of the New Testament. All the big ideas, the performing of minor miracles (Jesus never moved mountains or impregnated a cloud to create centaurs), the hanging out with prostitutes and washing of feet — it's all there.

Unlike some entries into Richmond Acts of Faith Festival — such as 2011's staging of "You're a Good Man, Charlie Brown" at the Firehouse — this show actually explores real issues of religion and faith.

Surprisingly moving and personal, this irreverent tale is perhaps best described as "Godspell" for agnostics. S