Director James Ricks’ new production, “Ubu 84,” couldn’t be timelier, opening at the Firehouse Theater to a packed audience mere days before the first presidential debate. Its source material is a cautionary tale about politics, power and corruption.

The two sources for Ricks’ script are separated by tone and by 53 years — “1984” was first published in London in 1949 and “Ubu Roi” opened in Paris and closed the same night in 1896. While “1984” is decidedly dark in spite of the humor of concepts such as double-think, “Ubu Roi” carries its dark implications under a veil of crass, bawdy humor and gratuitous violence.

Despite their differences, these two pieces offer a similar message: What may at first seem like a joke can become something quite sinister if given the opportunity to grow, expand and gain control.

The play opens situated in the world of “1984” with the protagonist, Winston, portrayed with gravity and restraint by Charley Raintree, suffering painful torture. It comes at the hands of Christopher Dunn’s frighteningly calm O’Brien, an Inner Circle official who’s betrayed Winston.

The set, expertly designed by Tennessee Dixon, splits the stage into multiple levels with dark, industrial surfaces and multiple surveillance screens. So I’m not sure why Ricks chooses to begin by showing us an event — Winston’s torture — that takes place much later in the story, to which the play later returns. Of the two sources, “1984” certainly is the most well known, so it’s safe to say that most audiences bring some understanding of that world. Showing us the same scene more than once is superfluous.

The first act suffers greatly from the pitfalls of adapting a novel to the stage, weighed down with too much exposition, failing to give the relationship between Winston and Julia time and space to believably develop and taking much too long to introduce the “Ubu” element — which provides a welcome change of pace and tone. Foster Solomon is both buffoonish and menacing as Pa Ubu, and Kimberly Jones Clark’s Ma Ubu is equal parts Betty Boop and burlesque. The two steal the show at every turn with their antics.
The tonal disparity of the source material might throw everything off if it weren’t for the outstanding cast members, who bridge scenes with ease, finding and conveying both the comedy and the insidious threat behind Ubu’s adolescent humor. 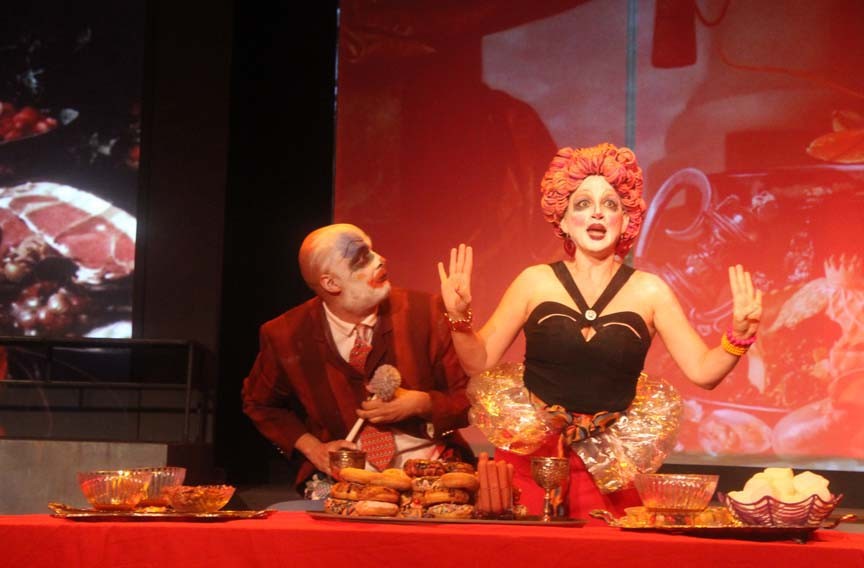 Bill Miller’s lighting design also helps with tonal transitions. “1984” scenes are always dark, low-light with plenty of shadows, and the “Ubu” scenes are marked by bright red lights that either create an atmosphere of bawdy fun or imminent danger, as Ubu shifts from boorish clown to treacherous, power-hungry maniac. (Also there are puppets. I was pleased to see them included as a little nod to Jarry’s vision of Ubu as a sort of live-action puppet show.)

The play hits its stride in the second act. During the course of the play, the two stories become increasingly intertwined as we learn that the “Ubu” plot is taking place in Winston’s dreams. By the final act, it’s clear that these humorous sequences are, in fact, nightmares.

Ma and Pa Ubu and their cohorts dance vaudevillian-style around Winston’s body as he writhes against his restraints. By the end of the play, having betrayed himself and his lover, Winston looks on in terror as Ubu steps out of his nightmares and into his reality with a sinister grin, smearing symbolic white paint across Winston’s face.

Opening night audience members receive buttons to wear, declaring “Ubu 4 President.” Before the show, Firehouse Artistic Director Joel Bassin addresses the audience, insisting that this production, like all theater, requires the audience’s full participation. At one point in the play, just as he steps out of Winston’s dreams, Pa Ubu steps off of the stage, throwing gold coins into the audience, now his laughing, smiling, unwitting supporters. The message is clear: We all must participate or risk the consequences of underestimating a clown. S