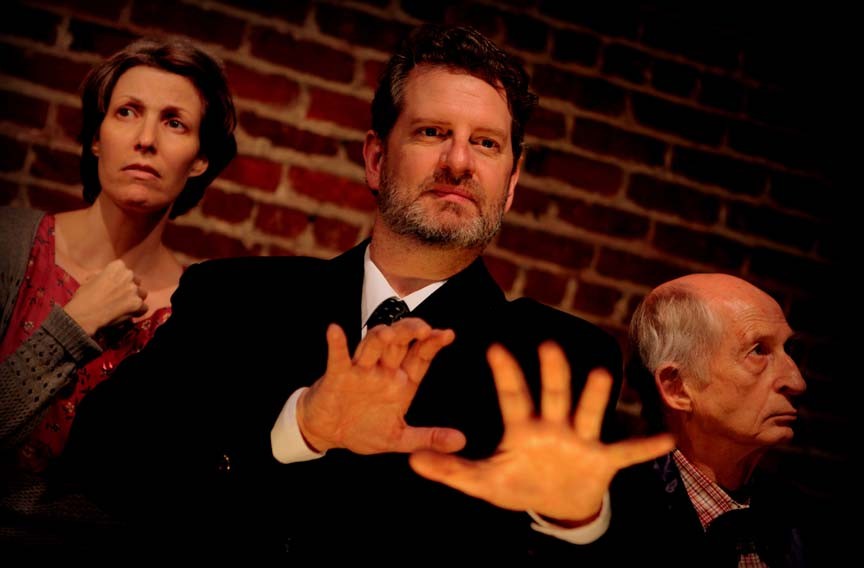 All of these, some of these, or none of these statements is true. It's up to the audience to decide which details of Henley Street Theatre's "Faith Healer" are to be believed.

For 20 years, Frank, his wife and mistress, Grace, and his stage manager, Teddy, traveled through Scotland, Ireland and Wales performing minor miracles. Through the show's four long monologues, each character reflects on his or her version of what led to the trio's dissolution. Teddy's take on why "The Way You Look Tonight" became their signature song differs from that of Frank and Grace. Where Frank recalls Grace as barren, she and Teddy discuss her birthing of a stillborn infant.

The three actors performing these roles are natural storytellers. Joe Pabst portrays Frank with seeming candor, oblivious to the origin of his powers or how they work. It's easy to understand how his character charmed the masses, as well as Teddy and Grace.

Katie McCall is a nervous wreck as Grace, the woman who's lost it all. As her character drowns her pain in Jameson, McCall gives an excellent portrayal of someone still conflicted about her past. Ron Reid is delightful as Cockney Teddy, nostalgically recalling the trio's triumphs and battles together. All do a remarkable job with their half-hour long monologues.

The play's engaging examination of faith and its meaning make it a perfect choice for Richmond's Acts of Faith Festival. The play is particularly intriguing in its presentation of faith gone sour, and how it can lead to some devastating outcomes.

Make no mistake — the show isn't a barn burner, choosing instead to explore faith in a smaller, more nuanced way. Long after the curtain falls, you'll find yourself turning over the truth about who Frank Hardy really was, and what faith means to you. S

Henley Street Theatre's "Faith Healer" plays at the School of the Performing Arts in the Richmond Community Center for Performing Arts, 2106-A N. Hamilton St., through Feb. 23. Tickets are $17-$27. For information visit henleystreettheatre.org or call 340-0115.