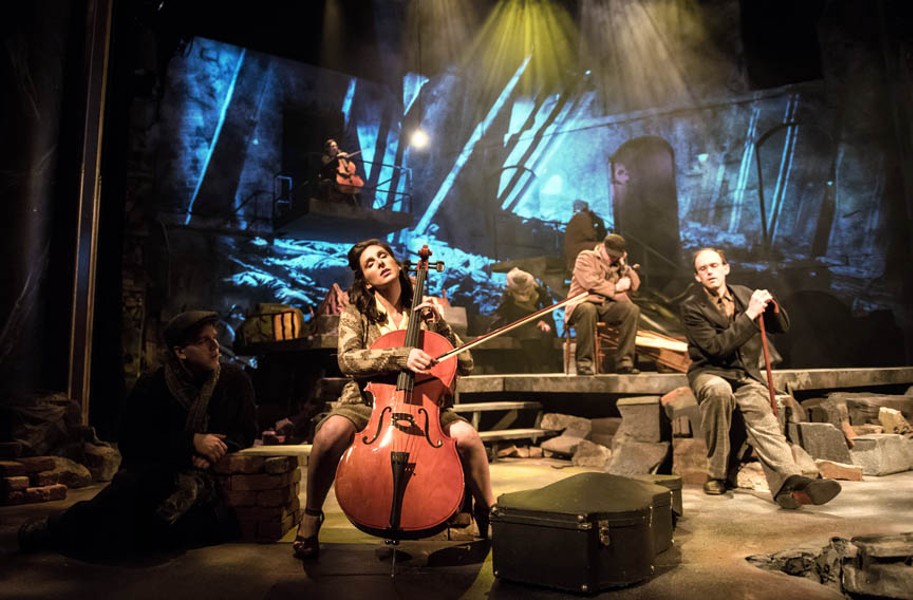 Has any conflict spawned more movies, television shows, books and plays than the Second World War? With the territory so well trod, especially the war’s European theater, has any story been left untold?

David L. Robbins seems to think so. The novelist and playwright’s third theatrical work, “The End of War” — adapted from his novel of the same name — aims to sidestep familiarity by focusing not on American and German forces, but on Soviet soldiers on the march to Berlin and the civilians affected.

The show’s production elements are the strongest features of the world-premiere staging at Virginia Repertory’s November Theatre.

But the real standout is Tennessee Dixon’s projections, combining newsreel and archival footage to show Berlin’s skyline under siege, newspaper headlines and concentration camp gates, among other visuals. Her projections work perfectly with Keller’s set, and — as also evidenced in Firehouse’s “Ubu 84” earlier this season — continue to be without peer in Richmond.

As for the story, the Berlin scenes play well, showing a mother and daughter trying to scrape together an existence as the war closes in around them. It being wartime, young cellist Lottie (Eva DeVirgilis) is asked to become the first woman to play in the Berlin Philharmonic. Her mother, Freya (a world-weary but natural Paige Larson), is harboring Julius (Scott Wichmann), a Jewish man in her basement. The ethical math that all three undertake to ensure their safety is an intriguing bit of drama. If only the scenes with the play’s two Soviet soldiers were as strong.

Ilya (Nicklas Aliff) is a murderous brut who still vomits upon visiting a Holocaust camp. Konsta (Wolf J. Sherrill) is the calculating mastermind who can’t be bothered to kill. Surely their scenes work better within the breathing room of a novel, but the constant talk of violence and being men gets repetitive in the play.

Under Nathaniel Shaw’s direction, the production elements are of a high artistic value, and Erin Snedecor’s cello work helps break up scenes of dialogue. While this is Robbins’ best play yet, it might be improved by focusing more on the Berlin civilians being ground down by war and their efforts to survive. S