Theater Review: Cadence’s "4,000 Miles" Shows How Growing Up Is Universal 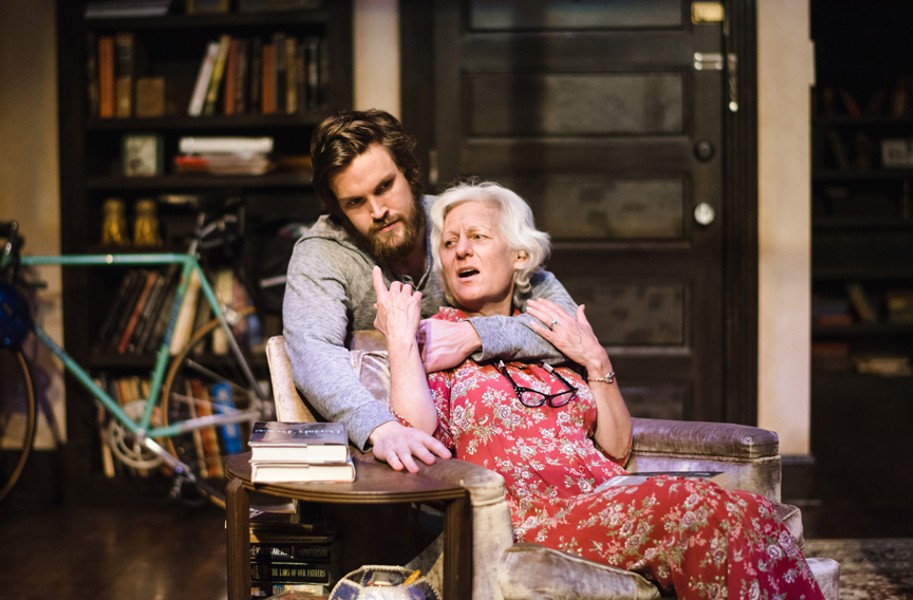 Jason Collins Photography Leo (Johnny Day) and his grandmother Vera (Irene Ziegler) prove that old liberals and new liberals can get along after all in a dramatic comedy that was a finalist for the 2013 Pulitzer Prize for drama.

Film director Martin Scorsese once wrote an essay about how you’re shaped the most by the experiences you have while you’re young.

He was mainly talking about experiencing movies, music and other art forms, but the notion holds true for life experiences too. We all recall the electric charge of that first kiss, the sorrow of the first heartbreak.

Leo, the young protagonist of Amy Herzog’s “4000 Miles,” is experiencing lessons like these when he re-enters his grandmother’s life. Staged on Rich Mason’s lived-in, West Village apartment set, the play looks for the humanity in us all.

Leo has been cycling across the country and needs a place to crash for a few days. He’s experienced some tragedy on his trip, and hasn’t been in contact with his family for months. At 91, Vera is fiercely independent, living alone even though she has trouble finding her words at times. Leo is obviously trying to sort through some issues, and Vera is happy for the company.

Under Gary C. Hopper’s direction, the two are instantly likeable, showing care for each other with enough confrontation to avoid Hallmark movie territory. They find lines of agreement, such as their love of Karl Marx and the occasional joint. When they quarrel, the comedy vaguely resembles “Odd Couple” with a millennial Oscar and a greatest-generation Felix.

Playing decades beyond her age, Ziegler is delightful as Vera. She’s completely taken over the role in both voice and mannerisms, and can conjure laughter seemingly at will. The last time she bit into a role this meaty was playing a teenager with an aging disease in Cadence’s “Kimberly Akimbo” a few years ago, a casting that yielded similar results.

Making his Richmond debut, Day is well cast as the scruffy 21-year-old, hinting occasionally at the dark currents that run beneath his character’s easygoing surface. In smaller roles, Kaelie Madison Ukrop (Bec) and Anne Michelle Forbes (Amanda) round out the cast as Leo’s love interests. Ukrop is sincere as Leo’s frustrated girlfriend, and Forbes is appropriately over-the-top as the party girl he brings home one night.

There is much to admire about the show, as well as Herzog’s script, which unfolds in small revelations the way life does. For all the talk of how millennials are different from previous generations, perhaps nothing has portrayed the distinction so clearly or compassionately as this play.

Luckily, there’s no grandstanding about values or which generation is right. Most of the show’s conflict is interpersonal, not political or ethical. When differences of opinion between Vera’s old-guard liberalism and Leo’s newer version emerge, they’re noted but aren’t points of tension. For instance, when Vera offers Leo a banana he declines, doubting that it’s locally sourced.

Funny, moving and intimate, “4000 Miles” is a rare show that entertains while emphasizing a message of compassion. While millennials may have different attributes from other generations, the process of growing up is universal. S

Cadence Theatre Company’s and Virginia Repertory Theatre’s “4000 Miles” runs through May 21 at the November Theatre, 114 W. Broad St. For tickets or information, visit va-rep.org or call 282-2620.