Theater Review: Cadence Theatre Company’s "Rabbit Hole" Deals Beautifully With Grief and the Ways We Get Through It 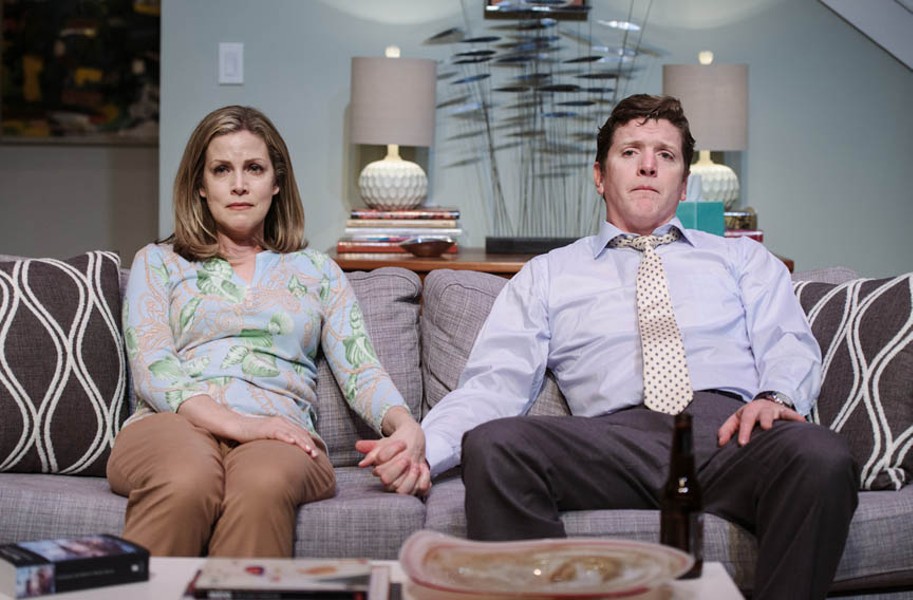 Written by David Lindsay-Abaire, the Pulitzer-Prize winning drama “Rabbit Hole” might be familiar to some audiences. It’s the play for which Cynthia Nixon won her 2006 Tony Award, and John Cameron Mitchell’s screen adaptation starred Nicole Kidman, who was nominated for an Oscar for her performance.

This is a drama whose reputation precedes it, and Cadence Theatre Company’s production doesn’t disappoint. It may even be the most satisfying drama of the season thus far.

“Rabbit Hole” explores grief through the lens of Howie and Becca Corbett, parents grieving the loss of their young son, Danny, killed in a car accident eight months before the action of the play. Their marriage struggles under the weight of the loss. Becca tries her best to move on from the tragedy, taking down Danny’s drawings and cleaning out his closet, while Howie clings to the comfort of the support group they attended together and his nightly viewings of their home videotapes. Becca’s mother and sister grieve in their own ways, as well. Everyone handles grief differently, and that’s the take-away message.

Even Jason, the teen boy who swerved to avoid hitting their dog, inadvertently killing their son, has his own particular ways of dealing with his grief over the loss. The title, “Rabbit Hole,” comes from his sci-fi short story, which allows for the possibility of another universe, a parallel timeline where he drove down a different block that day. We see the varied ways and complicated forms of grief, portrayed with compassion, empathy and even humor.

The success of this production lies firmly in the hands of the director, Anna Johnson, whose vision is crystal clear. She’s built a drama so real, immediate and layered with meaning and subtext it almost feels like life. All of the actors pull their weight, and Duke Lafoon and Grey Garrett deliver standout performances as Howie Corbett and his sister-in-law Izzy. They tease out a subtle and mysterious tension between these two characters, something that isn’t what it seems when it finally comes to a head.

Jody Smith Strickler’s Nat, mother of Becca and Izzy, provides much of the play’s humor, but with an edge that belies her heartbreaking experience of loss. Emotional highlights include Howie’s reaction to the home videos and the climactic moment when Jason, played by Tyler Stevens, comes face-to-face with the grieving family. All of these characters feel fully realized and full of nuance.

Rich Mason’s scenic design, Mike Jarrett’s lighting design and Jesse Senechal’s sound design all work in favor of the drama. The set is naturalistic: We’re peeking into the Corbett’s home. Lighting cues are subtle, used to indicate set elements we can’t see: sunlight though windows and flashing lights from a TV screen. Sound elements are natural and the gentle music between scenes doesn’t distract from the drama. These design choices demonstrate artistic restraint and an awareness of genre. The set elements aren’t there to be noticed, but to enhance the reality.

The production leads audiences down the many winding tunnels of human emotion, but not without humor and redemption. Expect to explore some darkness, but not without a bit of light. “Rabbit Hole” is not to be missed. S