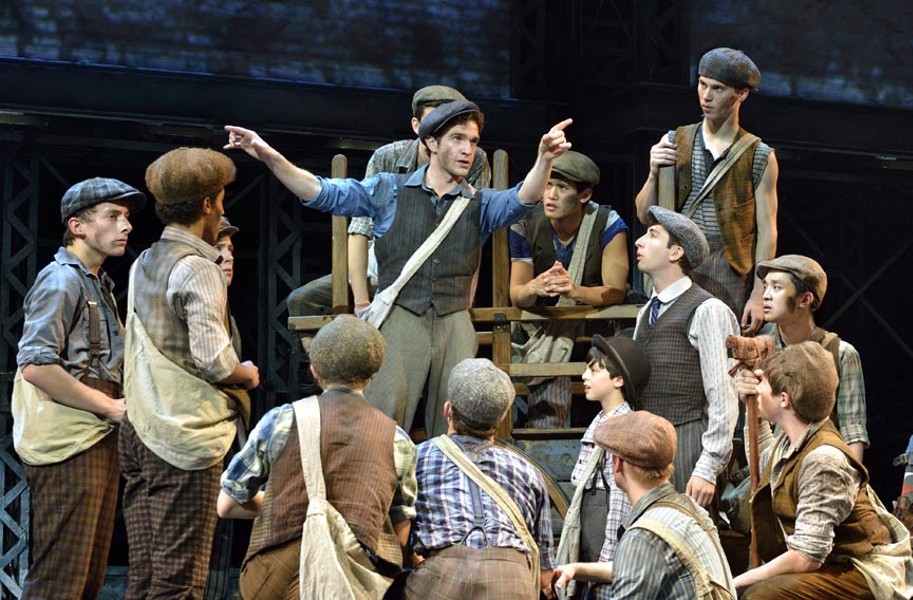 They were just supposed to take it.

With the increase in newspaper sales during the Spanish-American War, many publishers raised the price on newspaper hawkers from 50 to 60 cents per newspaper bundle. The increase was supposed to be offset by more sales, but after the war’s conclusion, some papers didn’t lower the price.

In July of 1899, thousands of New York’s newsboys went on strike to protest the actions of Joseph Pulitzer and William Randolph Hearst. They brought traffic to a standstill on the Brooklyn Bridge for days, tore up papers being distributed by strikebreakers and withstood violence enacted by men hired by the newspaper tycoons.

Though they didn’t lower the price, Pulitzer and Hearst finally agreed to buy back all unsold newspapers from the boys, and the newsies disbanded their union. The Newsboys’ Strike of 1899 inspired other strikes, and is considered an important step towards the establishment of child labor laws in the United States.

This struggle is dramatized in the Broadway musical “Newsies,” playing at the Altria Theatre on its first national tour this week. The show is adapted from the 1992 Disney movie of the same name, which starred a teenaged Christian Bale as protagonist Jack Kelly.

Fans of the film will find much of the show’s plot and Alan Menken’s score intact, though a few alterations have been made, including the addition of spunky reporter Katherine Plumber. In the tour, Katherine is portrayed by 18-year-old Morgan Keene.

Assigned to cover vaudeville acts and flower shows, Katherine decides the newsboys’ strike is not only a more worthy story, but one that will help further her career.

“She wants to write something of importance that will change the world, and Katherine just so happens to find that in Jack Kelly and the newsboys as they try to lower the price of newspapers,” says Keene, reached by phone from Providence, Rhode Island..

Another difference from the movie is in the show’s choreography, which won a Tony in 2012.

“There’s a lot more acrobatics in the musical,” Keene says. “It’s the most athletic dancing that I’ve really ever seen in my life. It’s so good, and it’s so consistent. It really just kind of takes your breath away.”

Six months ago, Keene was cast as one of the dancing boys in the ensemble just after her eighteenth birthday. She rose to her current role a few weeks ago, and says her favorite moment is the big company number “Once and For All” near the show’s close.

“It’s pretty much a song where they’re showing that this is the last straw, they’re on the last step of lowering the price of papers and they’re working together,” she says.

With its gravity defying choreography, appealing street urchins and compelling story, Keene says “Newsies” is a show not to be missed. And we’re not without our own history of newsies in Richmond, as told earlier this year in a Style cover story on author Harry Ward’s “Children of the Streets of Richmond, 1865-1920.” Our newsies were not unlike their New York counterparts and had plenty of lung power, though perhaps not as many dance moves as their Disney counterparts.