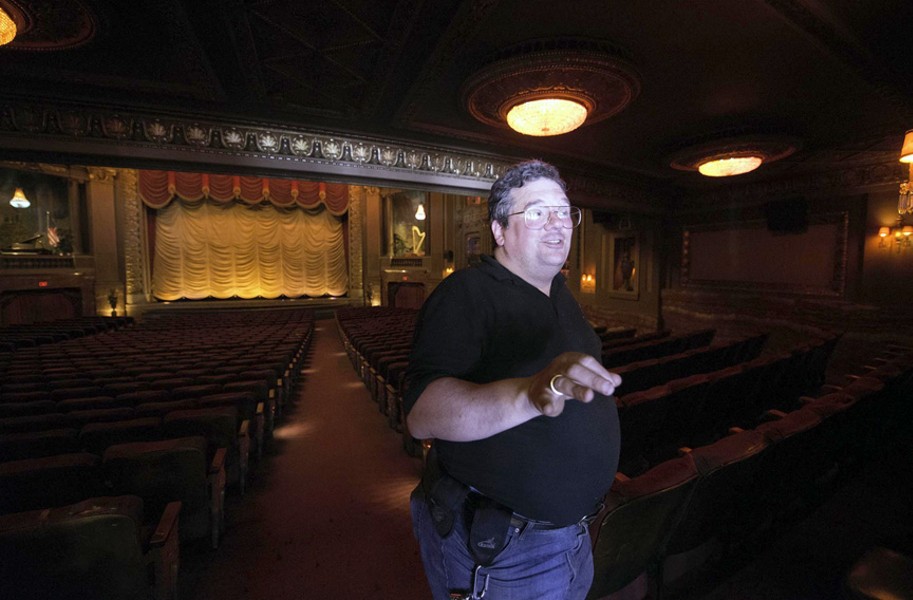 Scott Elmquist Count the general manager of the Byrd Theatre, Todd Schall-Vess, as one of the MoviePass skeptics.

Traditionally, Memorial Day weekend kicks off the summer movie season. But last year's season was so bad it contributed to a 25-year low in domestic theater attendance. A service called MoviePass might change that trend, but small theaters like the Byrd are wondering if they'll actually benefit.

MoviePass is known for its low subscription fee, which costs $10 per month. In exchange, subscribers can get into one movie per day. The service quickly reached 2 million subscribers by February, and it works at 91 percent of theaters. Owners say it does pull a younger crowd that might typically stay home. Yet some fear it threatens to bleed customers, who may not return to pay regular prices if the service goes kaput.

And MoviePass makes you wonder about the business model. It pays theaters the full price of each ticket. Amazon's trying to get ahead by losing money is so 2000. It's the Year of MoviePass.

How does it work exactly? When you sign up, you get a MoviePass card, which is essentially a debit card connected to your smartphone. You choose a showing on your phone, and then the ticket price is loaded onto your card. But before you can reserve a ticket and get a card balance, your phone must be detected within 100 yards of the theater. You're pretty much being watched. Prepare to see targeted ads.

MoviePass says its revenue strategy is based on user data, but some small theater owners aren't buying that line.

"MoviePass is a con job," Todd Schall-Vess says in a 58-minute diatribe that slam- dunks the too-good-to-be-true marketing. "They approached us in the same way that they have across the board. They didn't ask us, they didn't involve us at all. They just put our name up on their website and told people they could use it here." As general manager of the Byrd Theatre, Schall-Vess says he's focused on selling the rare value of a movie palace, which in return gives people an experience worth leaving home for. But MoviePass' creepy phone tracking and its lack of accountability are proverbial flies in the palace punch bowl, in Schall-Vess' view.

How unaccountable has MoviePass been? Schall-Vess draws attention to a Hollywood Reporter interview in which chief executive Mitch Lowe insinuates that MoviePass is too big to fail. Lowe suggests that exhibitors should prop him up by donating cuts of ticket and concession sales, or else they might lose out on the higher attendance rates he's bringing to them. "I know many say they don't want to do that," Lowe says. "But when we partner with a theater giving us a 20 percent discount, subscribers go to that theater four times more often than they did before and spend twice as much on concessions."

"OK, you know what, that's the thing you [Lowe] said wasn't going to happen at the front," Schall-Vess fumes. "And none of us believed you. Because, as it turns out, you were in fact lying."

Helios and Matheson Analytics purchased MoviePass in August 2017. After making the purchase, the company lost $150 million.

Joe Masher, chief executive of Bowtie Cinemas, which has screens in Scott's Addition, did not immediately respond to requests for comment. He's publicly made positive remarks about how MoviePass brings millennials to theaters. But according to Schall-Vess, Masher also recently went to meet with Lowe. Masher is certainly attentive to the targeting of small businesses, and was present for Richmond City Council's approval of the meals tax.

It wouldn't be surprising if Masher was gauging Lowe's long-term vision, because lots of people are questioning MoviePass' sustainability.

In late April, anticipating blockbuster season, MoviePass began prohibiting repeat visits to the same movie. It also began requiring subscribers to take a picture of each ticket stub before the next ticket could be approved. New York Times reporter Kevin Roose profiled this bizarre rise to suicidal dominance. He sees the MoviePass model seeping in everywhere, and said on Twitter that "the entire economy is a handful of untouchable tech giants, some shrinking old-line companies, and a whole lot of growth-chasing money losers."

"To me, what it looks like, is MoviePass and the theater owners are posturing for some negotiation down the road," says Richard Coughlan, a professor at the University of Richmond who specializes in business ethics and negotiation.

This corroborates Schall-Vess' earlier warning that, "If it fails, MoviePass will blame us, rather than say they misjudged the nature of the industry."

Coughlin also says theater owners are voicing legitimate concerns. But he does agree with his colleague, professor Jeff Harrison, who says that no one is being forced to do anything — yet. If Coughlan has a critique of MoviePass, it's how it abruptly pulled its service out of 10 popular AMC multiplexes. "That's maybe a first move, where you have to wonder about [MoviePass] serving their customer's interests," he says. "That seems to me to be working against their customers for some larger purpose."

Neither Masher nor Schall-Vess have denounced people who use the service.

"I love movies just like them," says Schall-Vess. Yet even if MoviePass manages to negotiate a summer fling with small theaters, the popcorn could be close to hitting the fan. S