For three decades, guys and dolls have left the stage and hit the gridiron. 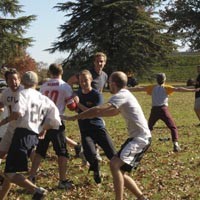 All Richmond actors already lead dual lives — and for some, even that's not enough. By day, many of them have secret identities: normal jobs at normal places such as Capital One or the Library of Virginia. On nights and weekends they become thespian gods and goddesses to delight audiences on Richmond stages. But many of these greasepaint superheroes also have other secret identities — as football players.

The Byrd Park Football League — or BPFL as it is lovingly called — has had regular games for nearly 30 years, is almost entirely made up of Richmond theater folk.

“Almost every local actor has played with us,” says actor Ford Flannagan, a league founding member who starred in Theatre IV's “Peter Pan” last season. Every area theater, he says, has been represented on this field at one time or another. But anyone can play in the ongoing two-hand-touch football games on a field at French and Blanton streets, near Byrd Park.

“Men, women, kids, all ages and skill levels are welcome,” says Eric Williams, a regular player and director of tour operations for Theatre IV. The offspring of Flannagan and Williams have been seen on the field for years. “It's been great watching these kids grow up playing this game,” says the league's unofficial commissioner and sports junkie, Scott Wichmann, who just finished playing the title role in Henley Street Theatre's production of “Richard III.”

Playing sports together is a way for theater people to unwind and have a social life outside of their work. When asked why he sacrifices his Sunday sleep-in time to toss around the pigskin, Wichmann says, “It's great to get out there and mess around, but I guess it's really the people who play that keep me coming out week after week.”

True to the “anyone can play” edict, the BPFL graciously included this writer in an early season game. It was a morning of sports meets theater. In the huddle, quarterback and actor Mark Persinger (who played Big Jule in Barksdale's “Guys and Dolls”) laid out a strategy he termed “choreography.” The play put Ronnie Brown (who is currently touring with Theatre IV's “The True Story of Pocahontas”) a foot from the goal line, where he launched into a victory dance before he was “tackled” by actor Eddie Tavares, seen in last season's “Peter Pan.” “Remind me which theater is playing ‘Showboat’ this season?” Persinger quipped.

Wichmann arrives at the field before the 9:30 a.m. game to set up the cones defining the boundaries of the field. He's been playing since the league's annual Thanksgiving Day game (the Turkey Bowl) in 1998. Other big names that have passed the pigskin in the BPFL include film actor Blair Underwood and Tony-nominated actress Emily Skinner. Playing for the league can bring television fame as well, claims Tony Foley of Theatre IV's last season Christmas show, “A Christmas Story.”

“We've been the backdrop for the TV 6 weather report a bunch of times,” he says. S