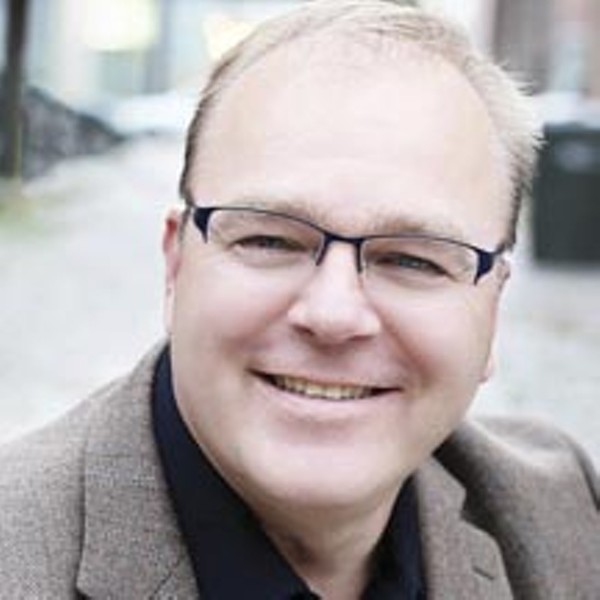 Longtime artistic director of Richmond Triangle Players, John Knapp, is leaving for a job in Baltimore.

For 20 years, John Knapp has made his mark on Richmond theater. After serving most of that time as artistic director of Richmond Triangle Players, Knapp is leaving this summer for a job in Baltimore.

Under his creative vision, the company blossomed from a fringe theater in an after-hours speak-easy to one of the area’s most respected stages.

“It’s sad to be going, because I feel like Triangle is my baby, from the artistic side,” Knapp says. He’s had a hand in nearly every show the company has produced -- 103 productions by his count. For the last 14 years, and as a volunteer, he’s been the sole selector of the company’s season lineups, balancing serious dramas with camp comedies and smaller musicals.

Knapp, who grew up in Wisconsin, began working in theater while employed in the medical field. In 1985, his job transferred him to Richmond, where he became involved with the John Rolfe Players, the Henrico Theatre Company and Dogwood Dell. His friend Michael Gooding approached him in 1992 about starting a theater company, and they began staging shows in the Mansion Room of Fielden’s with Steve J. Earle, Jacqui Singleton and Marcus Miller.

“There was a limited audience that would go to Fielden’s,” he says. “It was pretty nasty, but we did some great work in that space.”

Richmond was leery of embracing gay culture. Some stores wouldn’t allow the company to display show posters because the word lesbian was in the title. Knapp recalls a respected local actress declining to take part in the first season for fear of being labeled gay.

“That’s all changed,” Knapp says. “Now people knock on our doors and say, ‘We want to be a part of this.’”

Among the company’s accomplishments under his tenure -- including awards from the Richmond Theatre Critics Circle (Style Weekly’s theater critics, including this writer, are members) -- he counts the world premieres of shows such as “The Stops” and “Joe Jackson’s Night and Day” as special. Triangle’s “The Stops” went on to win best musical at the 2006 Columbus National Gay and Lesbian Theatre Festival.

“There isn’t anything we’ve put on the stage that hasn’t been touched by John,” says Phil Crosby, Triangle’s managing director. “He doesn’t always get the credit because he isn’t as visible a player, but he’s the reason we’re doing what we’re doing.” Heading to Baltimore with Knapp is his husband, Tim Gillham, who founded the Richmond Men’s Chorus in 2001. Gillham also formed the Richmond Women’s Chorus in 2009.

Knapp says it’s reassuring that Triangle will continue its mission of performing works that relate to sexual minorities. “If we can change the opinion of one or two people through art, it makes it all worthwhile,” Knapp says. “Everybody’s people, and they just want to love and be loved. That’s all there is to it.” Knapp has planned Triangle’s next season, which will be overseen in the interim by its associate artistic director, Noreen C. Barnes, who’s also director of graduate studies for Virginia Commonwealth University’s theater department.