The Young Woman and the Sea

Jacques Cousteau's granddaughter gets into the family business. 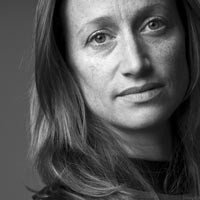 Yes, she's one of those Cousteaus. She's the granddaughter of Jacques-Yves Cousteau, co-inventor of the aqua lung, explorer of the ocean, captain of the Calypso, hero of countless blue-tinted documentaries. Her father is Jean-Michel, filmmaker, founder of the Ocean Futures Society (and a sweet little resort in Fiji). Her mother is Anne-Marie, once a photographer for Jacques' team.

So it surprises no one that CAcline Cousteau too has become an adventurer and an environmentalist, recently going to Australia to make a Discovery Channel documentary on sharks, working on her father's “Ocean Adventures” series for PBS, leading tours around the world, and helping launch a face cream with an environmental message for La Prairie, which proves you can get a message into anything these days. It's also a reminder that there are a lot of others trying to save the world these days, and for Cousteau, it's been a matter of finding her own little bit of water in what's become a more crowded sea than the one her grandfather paddled in.

Cousteau, 36, didn't initially intend to get into the family biz. “I was a kid growing up in maybe a unique family, but I was given the opportunity to do whatever it is that I chose to do,” she says by phone from her home, exotic Brooklyn. Cousteau talks easily, laughs a lot, seems to be having a good time here on planet Earth.

“It was part of my upbringing to really feel like I was connected to nature,” she says. “But I wasn't forced into it, coerced into it. I followed actually a different career path completely. And it was really as an adult that I came back to this world as I guess a profession rather than just a love. And really started working in filmmaking about six years ago and that's what I'm concentrating on now.”

She's starting a production company to make films on her own, which means she's diving into seas more treacherous yet: the realm of investors, where the water is chummed with money.

Cousteau got a call from her dad in 2003 to help out on an “Ocean Adventures” trip, following a migration of gray whales from Baja California to Alaska. “It really was up in the arctic that I sort of had that moment of realization that that's what I wanted to be doing,” she says. “I want to be out in the world collecting stories and bringing it back to people and reconnecting those people who don't have the opportunity to see these different elements. I wanted to help reconnect them with the natural world.”

It was Jacques who was the first to add activism to adventuring, she says, because “at the end of his days really he was seeing already the changes in the oceans through human impact, so he was really advocating for future generations to really think about more of the environmental issues and not just exploring.”

In finding her niche, Cousteau explored for people, not just fishes. “So a lot of what I had done was looking at the human behavior and taking the human angle on things,” she says, “... looking at the relationship of humans to the environment, looking at our behaviors, looking at how we can learn from traditional cultures really about what our relationship used to be, and in some places still is.”

Relationships. They can be tricky. Even in the Cousteau family. The question of who would be heir to Jacques' legacy began with his two sons by wife Simone: Jean-Michel and Philippe. Philippe was supposedly being groomed by Jacques to take over the family dynasty until he died in a plane crash in 1979, at which point Jean-Michel became Jacques' collaborator and filmmaker.

It gets a bit more complicated. When Simone died of cancer in 1990, Jacques married his longtime mistress, Francine, who took over his estate when he died in 1997, including the Cousteau Society and ownership of the Calypso. This has resulted in some legal exchanges in the family and explains why CAcline's Web site says, matter-of-factly, “CAcline is in no way affiliated with or supports the work of the Cousteau Society or any related trademark.”

Meanwhile! CAcline's brother Fabien and Philippe's children, Philippe Jr. and Alexandra, are on the rise as activists, environmentalists, personalities. So it's easy to see how the sea can get crowded fast. But CAcline, in her pleasant way, shows no signs of bitterness or competition. Of her brother and cousins, she says, “We've each really concentrated our specialties, which is I think fantastic. I keep saying there's this whole Cousteau team out there doing great environmental work.”

And that's what emerges most from this third-generation adventurer: a relentless optimism, despite the environmental challenges, despite the family upheavals, despite the sharks and production costs that often circle. And in this age of so much content and so many messages, of so many people diving in for so many reasons, she's glad that people still approach her and tell her how Jacques Cousteau inspired them.

“It's a great reminder that a person can have that kind of impact on so many,” she says. “And perhaps that's not the case these days ... How do you distinguish that person? Who is that person? Or is it really many people and do you highlight those many people instead? Because each person will find their hero within somebody.

“And as population grows,” she says, laughing, “hopefully we're going to have more heroes, and not just more people.” S

CAcline Cousteau speaks about her adventures Thursday, June 25, at 7 p.m. at the Science Museum of Virginia as part of the kickoff to the “Shark Space” exhibit. Tickets are $10-$20. Jean-Michel Cousteau's film “Sharks” opens at the IMAX Dome on June 26. Call 864-1400 or visit www.smv.org.