The Year in Monuments 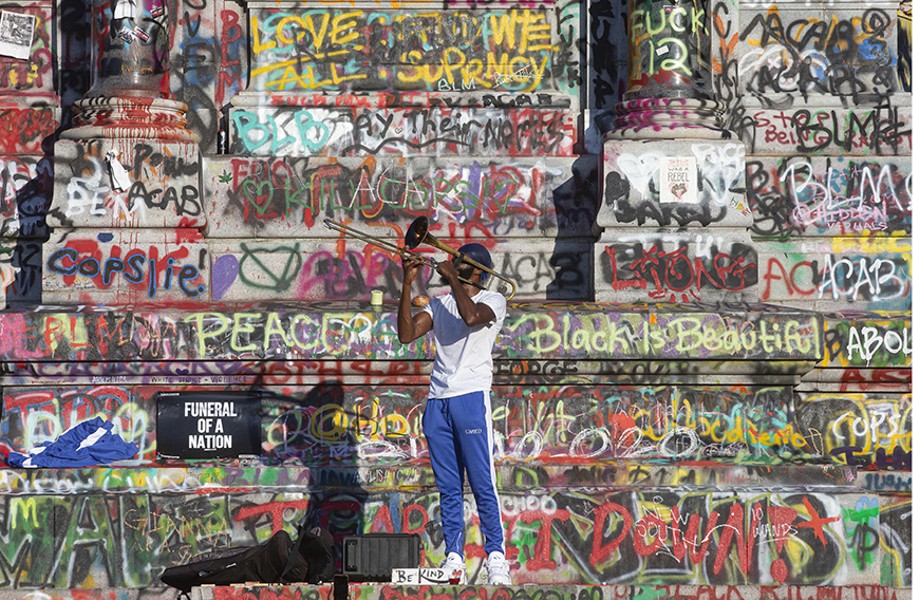 May 31
Protesters marching on Arthur Ashe Boulevard ignited the headquarters of the United Daughters of Confederacy late at night. The once prominent organization, linked in its earliest days with the Ku Klux Klan, had operated quietly next to the Virginia Museum of Fine Arts for decades, flying the Stars and Bars. The fire was quickly extinguished by firefighters, but only after structural damage to the building.

June 4
Gov. Ralph Northam ordered the Lee statue, owned by the state, to be removed. The area around the statue, a grass circle where no-trespassing signs had long been in place, has emerged as a gathering space for protesters and community members alike (see side interview with Princess Blanding). Legal challenges followed. 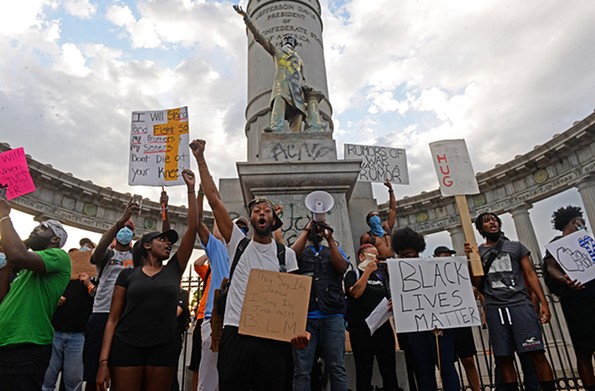 June 6
A statue of Confederate officer and plantation owner Williams Carter Wickham fell as protests over George Floyd’s death continued. Two of his descendants had requested City Council remove the statue in 2017, noting that he “unapologetically accrued power and wealth through the exploitation of enslaved people.”

June 9
The Richmond Indigenous Society holds a protest at the statue of Christopher Columbus on the southern end of Arthur Ashe Boulevard. After sunset, protesters dragged him into Byrd Park’s Fountain Lake, which once served as the scene of city-enforced whites-only swimming.

June 11
The Richmond Police Memorial, which had been moved to Byrd Park from next to police headquarters in 2016, was removed by workers for safekeeping. Protesters had splashed the figure with red paint intermittently over the years. Glenwood Burley, a retired police officer and memorial caretaker, told WRIC that protesters defacing the statue amid protests over George Floyd was “incomprehensible.”

June 11
A pink-splattered Jefferson Davis statue tumbled from his plinth on Monument Avenue as protesters finished weeks of recontextualization. Former president of the Confederacy, Davis’ was the only Monument Avenue statue recommended for outright removal by the city-organized Monument Avenue Commission in 2018. But protesters didn’t wait for city action, toppling the statue that had stood since 1907.

June 16
Protesters toppled the Howitzer Monument, sandwiched among Virginia Commonwealth University Monroe Park campus. Dedicated to the Richmond Howitzer Company of the 1st Regiment of Volunteers, which is remembered for presiding over the execution of abolitionist John Brown in what is now West Virginia.

July 1
Shortly after Mayor Levar Stoney sought City Council’s permission to immediately remove city-owned Confederate statues, receiving a less than enthusiastic response, a work crew from Connecticut appeared at Arthur Ashe Boulevard and Monument Avenue. Within a few hours, as a hailstorm broke out, Stonewall Jackson and his horse were aloft for the first time in 101 years. They were carted away as hundreds cheered.

July 2
The work crew moved a few blocks to remove Matthew Fontaine Maury, the Confederate naval official whose oceanographic contributions had been memorialized in bronze. He received the second most votes in a Style Weekly monument poll from March. While long known for his contributions to science, his plan to begin a settlement of Virginia landowners and their freed slaves in Mexico is often overlooked.

July 7
Continuing under Stoney’s direction, workers took down the statue of J.E.B. Stuart as onlookers cheered. Dedicated in 1907, it had stood for 113 years. This is the statue that aesthetically inspired renowned modern artist Kehinde Wiley to create “Rumors of War,” installed at the Virginia Museum of Fine Arts in 2019. 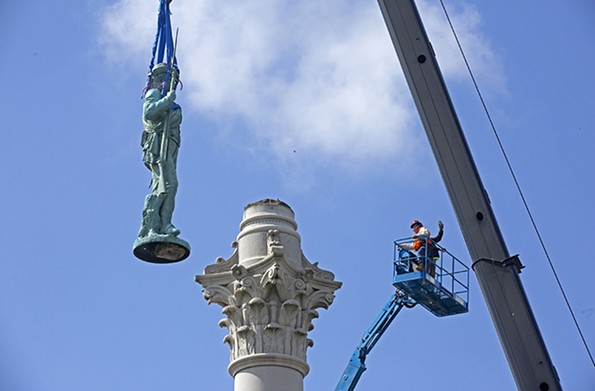 July 8
The same work crew dismantled the Confederate Soldiers and Sailors Monument on Libby Hill. The committee formed to erect the 100-foot monument in 1889 was headed by Richmond’s mayor. It was installed five years later at a cost of $30,000. One-hundred-and-thirty-one years later, Stoney paid a reported $1.8 million to a former political donor to take them down, stating it was “time to put an end to the Lost Cause.”

July 14
The Richmond Times-Dispatch reported that the city-owned Confederate statues are being stored at the city’s wastewater treatment plant. Five months later, City Council announced it had received 22 bids for the statues. Among them: a Los Angeles art museum and an art studio in Connecticut that proposed selling off pieces to raise funds for city schools. The Valentine hopes to add Jefferson Davis to its collection of works sculptor Edward Valentine.

July 23
A statue of Lee is removed from the state Capitol along with busts and artifacts of other Confederates. A state panel was expected to make a decision on its replacement this week.

Oct. 27
After months of legal wrangling, including a judge who recused himself, a Virginia judge ruled that statue backers offering 19th-century covenants as grounds to keep the Lee monument in place “would be in violation of the current public policy of the Commonwealth of Virginia.” This dissolved the temporary injunction blocking the Lee statue’s removal. Several Virginians filed notice of appeal of the ruling.