Zakir Hussain, legendary master of the tabla, joins BAcla Fleck at the Modlin. 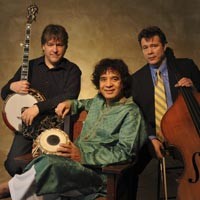 The Modlin Center prides itself on presenting interesting musical combinations. The most intriguing of this season is the trio of BAcla Fleck, Edgar Meyer and Zakir Hussain, three pre-eminent virtuosos from very different musical worlds.

Fleck has almost single-handedly transformed the image of the banjo, taking it far beyond its traditional bluegrass range so successfully that he's been nominated for Grammys in more categories than any other musician. The New Yorker once called the McArthur genius grant-winning Meyer, a bass player, “the most remarkable virtuoso in the relatively unchronicled history of his instrument.” Fleck and Meyer have been friends and collaborators for 25 years. Together and apart, they've graced the Modlin Center stages several times in the past few years.

Hussain is the wild card, an astounding player capable of producing a huge sound from his hand-played drums, a blazing blur of rhythm and counter-rhythm rich in color and texture, from a rubbery bass to a sharp percussive slap. There's melody as well: In the midst of a hypnotically complex solo on Charles Lloyd's “Sangam” CD, Hussain snaps off a quote from “St. Thomas,” Sonny Rollin's calypso standard.

The tabla player is accustomed to cross-cultural collaboration. The son of tabla master Ustad Alla Rakha (famous for playing with sitar legend Ravi Shankar), Hussain first toured the United States as a teenage Indian classical music prodigy in 1970. His first East-West musical encounter was in the seminal 1975 John Handy-Ali Akbar Khan band (1975). Since then he's been involved in a succession of exceptional projects, from guitarist John McLaughlin's Shakti in the '70s to saxophonist Lloyd's trio in 2006, along with more popular music collaborations with George Harrison, Van Morrison and Grateful Dead drummer Micky Hart. But even with his success in the West, he keeps his fundamental skills honed; more than half of his 130 performances every year are of Indian classical music.

“And now,” Hussain says, “35 years down the road I run into something new, new ideas and patterns, a new way to interact. It's not just a group but an extended family.” The intimacy carries over into the performances. “The acoustic environment lets us get deep into the sound of each other's instruments, to create together. It is beautiful, totally open when you have the comfort that the people you play with will take that part of you and delicately carry it to the next level.”

There's common ground in that the musicians are accustomed to playing a rhythmic role in their various musical settings. Hussain sees their collaboration as part of a global renaissance, along with such films as “Slumdog Millionaire” and the oriental explorations of cellist Yo-Yo Ma, opening and recombining genres and traditions. “This is a very interesting time artistically,” he says.

Despite his acclaim, Hussain views his art with humility. “My teacher,” he says, “who was also my father, always taught me that you should never try to be a master, just a good student.” His Modlin Center appearance, in the company of Fleck and Meyer, promises to be a memorable lesson.

BAcla Fleck, Zakir Hussain and Edgar Meyer play on Sunday, Oct. 4, at 7:30 p.m. at Camp Concert Hall, Booker Hall of Music. This event is sold out.