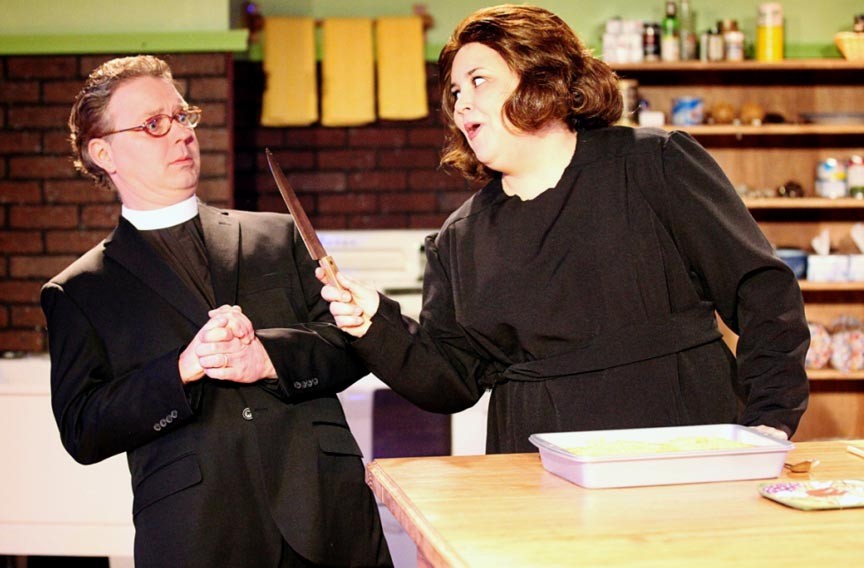 In Swift Creek Mill's show, suitable homage is paid to the Lutheran Church and the members that make its lunch. Set in rural Minnesota in the '60s, the proceedings revolve around the basement kitchen of East Cornucopia Lutheran Church of the Prairie. Penned by Jim Stowell and Jessica Zuehlke with music and lyrics by Drew Jansen, the production is gentle-natured fun — with a few curveballs. The songs are especially amusing, whether poking fun at Lutheran cuisine ("The Pale Food Polka"), menopause ("My Own Personal Island") or preparing food for funerals ("Dead Spread").

Robin Arthur plays the change-resistant grande dame, Vivien Snustad. Commander of the kitchen, she has no problem telling people exactly what she thinks. Ingrid Young is the hot-flash-prone Mavis Gilmerson. Tara Callahan is Signe Engelson, the college student interested in a Catholic boy. AnnaMarie Rossi plays her mother, Karin, and Brian Vaughan rounds out the cast as the pastor, the Rev. E.L. Gunderson. Arthur and Young get some of the show's biggest laughs, and Callahan and Vaughan display their beautiful vocal talents.

Director Tom Width employs some of his signature comic gags, and Arthur's choreography only adds to the spectacle. Width's set looks just like a church basement kitchen, right down to the two fridges and block letters on the doors. Under Paul Deiss' musical direction, the quintet's versatile voices blend well and Maura Lynch Cravey's costumes fit the period.

Sure, the ending is predictable, and it doesn't pack the same zany punch as "Nunsense," but "Church Basement Ladies" is big on charm and throws in quite a few laughs along the way. S

"Church Basement Ladies" runs at Swift Creek Mill Theatre, 17401 Jefferson Davis Highway, through May 19. Call 748-5203 or go to swiftcreekmill.com for tickets and information.