by Text by Edwin Slipek Jr 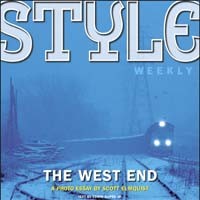 Unlikely as it seems, the history of the often-called "fashionable" West End has as much in common with Southern California, or even south Florida, as it does with the rest of Richmond.

Consider: In the 1920s Los Angeles and Miami established their current suburban patterns when a generation of affluent and mobile Americans said adios to the frigid East or Midwest and moved to these warmer climes. They migrated because they had the means and just plain wanted to.

This was far different from traditional settlement patterns elsewhere in the United States, where folks were forced to set up housekeeping according to job or housing availability.

By the 1920s in Richmond, Jews with Eastern European roots lived in Shockoe Bottom and blacks in Jackson Ward, Carver and north Church Hill. Factory-employed Welsh descendants populated Oregon Hill while much of South Richmond and some North Side neighborhoods were also working-class.

But in the 1920s the West End began to develop as an automobile suburb, populated by affluent Richmonders who chose to build homes -- with garages — there.

Windsor Farms was one of the area's first planned subdivisions. Here, two prominent Richmond families uprooted manor homes in England, Agecroft Hall and Virginia House, and replanted them on the banks of the James River. This set an impossibly high standard and decidedly Anglo-centric aesthetic for future development.

The '20s also began the transformation of Williamsburg from a forgotten backwater into a premier Colonial theme park. The Williamsburg mansion and cottage became a paradigm for Richmond domestic architecture as many regions of the nation moved toward modernist architecture. The local norm was set with the frame or red brick "Colonial" with dormer windows and attached family rooms, sun porches and kitchens.

Truth to tell, development momentum had already been building westward before the advent of the automobile. With the establishment of electric streetcars in the 1880s, the Fan District, Monument Avenue and the neighborhood west of the Boulevard began to develop. So did Richmond's earliest stylish suburbs — Barton Heights and Ginter Park.

But the developers of these North Side suburbs didn't foresee the coming automobile. They assumed residents would continue to travel downtown on the streetcars for work, shopping and entertainment.

The later, West End suburbs offered enhancements not found in the first suburbs. Developers established upscale, institutional anchors that would ensure stability, recreational outlets and social cachet. The Country Club of Virginia and the University of Richmond both opened in the 1910s.

St. Stephen's Episcopal Church at Grove Avenue and Three Chopt Road was one of the first churches built in the West End. It's a stone's throw from the tennis courts of "The Country Club," and some Richmonders refer to the somber Gothic pile as "St. Convenience." St. Bridget's Catholic Church would later build next door just to the west.

Unlike their counterparts on the North Side, in the 1920s West Enders didn't necessarily need to travel downtown to shop. There was ample retail along Grove, Patterson and Lafayette avenues. The Westhampton Theatre on Grove continues to screen top-rated films.

Schools were built: Albert Hill, Westhampton, Thomas Jefferson and later Tuckahoe and Mary Munford elementary. Thomas Jefferson, or "TeeJay," built in the 1920s, remains the most glorious secondary school structure in the area, public or private. Before middle-class flight to the counties and private schools in the 1950s and '60s, TeeJay was also considered one of the leading high schools in America academically, or at least its graduates thought so.

By the turn of the last century, many of Richmond's prominent Jewish families had pioneered the move westward by building mansions on Monument Avenue. Half a century later, by the 1950s, Richmond Jews simply moved farther westward into Henrico County and in 1958 moved the Jewish Community Center there, establishing it as a pioneering suburban recreational and cultural anchor.

The previous year had been seminal for the West End. The area began to shift from being overwhelmingly residential to adding a larger commercial component. In 1957 Willlow Lawn was completed. It and Southside Plaza were Richmond's first major suburban shopping centers. Also in 1957, just a block away from Willow Lawn, Best Products opened its first catalog showroom on West Marshall Street, which would grow to a $2 billion national operation. And Reynolds Metals Company opened its elegant corporate campus designed by internationally renowned architectural firm of Skidmore Owings & Merrill. It's now the corporate home of Philip Morris USA.

These things set the stage for later suburban corporate retail and office park development that continues, for better or worse, today.

So in many ways, the West End as we know it is 50 years old this year. And it shows few signs of slowing down. The malls have gotten larger — consider Short Pump. The roads have gotten wider — consider I-64 and I-288. Office parks are ubiquitous. And where there was just one West End high school, Thomas Jefferson, a plethora of schools serve the still-expanding population: Douglas S. Freeman, Hermitage, J.R. Tucker, Deep Run and Mills Godwin.

A final question: Just where does the West End begin? You're likely to get a different answer from whomever you ask. "It starts at the Boulevard," one longtime Richmonder said. "Doesn't it start at Hamilton Street, west of I-195?" asked another. "It's the area around West Broad Street and Staples Mill, isn't it?" asked a third.

Regardless of where it begins, there is unanimity as to where it ends: somewhere in Goochland County on the road to Charlottesville ... and still expanding.

What's the draw? The same things that have attracted residents since the 1920s: verdant landscapes, good schools, recreation and shopping. Most reached by automobile.

And while this isn't scientific, West End shares something else with Southern California and South Florida. There are probably more swimming pools per capita here than in any other part of Richmond. S