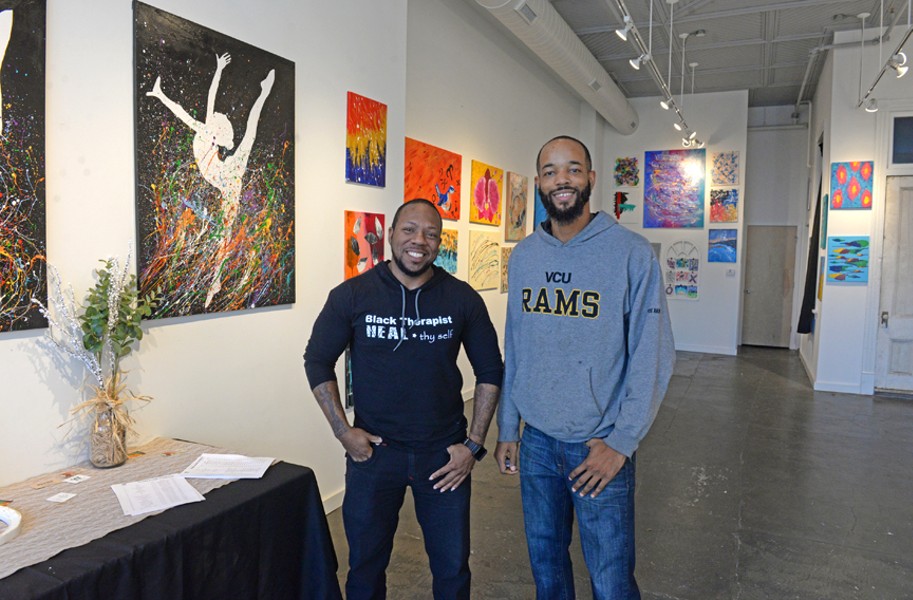 Both sets of Ajay Brewer's grandparents were from Blackwell, as was his mother's side of the family. He recalls his grandmother telling him that when she'd been young, black kids knew better than to walk on the "white" side of the street where Manchester began.

"Da 'Well, that's what we used to call it when we wanted to come over here and hang out," Brewer says of the longtime nickname for Blackwell, the neighborhood adjacent to Manchester. "Someone proposed it for the name of the gallery and here we are."

The Well Art Gallery sits in a renovated building on a changing block of Hull Street, next door to a beauty salon and down the block from Hot Diggity Donuts, where customers can score craft sourdough doughnuts and classic cocktails. Brewer, who also owns Brewer's Café a block and a half away on Bainbridge Street, is poised to open Brewer's Waffles, a waffle and milkshake shop in the space adjacent to the art gallery and accessible through a connecting door.

Part of the motivation for the waffle shop and art gallery came from the focus on art at Brewer's Café. "We emphasized art as inspiration and covered the walls with it," Brewer says. "But we needed space for more art. There was a moment when VCU did everything possible to make this an art town and now Richmond is art. People like Ross Brown, with his studio down the street, have been continuing that tradition here."

The gallery also functions as a venue for events such as birthday parties, showers, receptions and meetings for nonprofits. With tables, chairs, catering and an alcohol license, the space is well-suited to welcome the public with changing exhibits by local artists.

Brewer's business partner, James Harris, says that as gentrification of Blackwell rolls on, the demand is there. "We want to be as diverse as possible," Harris says. "This is something different, something new, but we're hoping to grow the scene here."

The two behind the gallery felt like they needed a bigger platform and looked to places like Quirk Gallery with its adjacent coffee shop for inspiration.

"The problem with art galleries is often a lack of foot traffic," Brewer explains. "But everyone who comes into Brewer's Waffles can be exposed to art by walking through the connecting door to the gallery."

Once the waffle shop opens, its hours will be 7 a.m. to 2 a.m., a significant amount of time for art-lovers to have access to a gallery. Artist Ed Pokog, whose hip hop-inspired art makes up the current show at the Well, sees benefits to the pairing of food and art.

"People can come into the gallery, then go get waffles or a milkshake and talk about what they saw," he says. "It keeps them engaged in the art longer."

Brewer, a stockbroker for a decade, has been a cheerleader for South Side since he opened his eponymous cafe and was part of the motivating force behind Manchester Manifest, the south of the river equivalent of First Fridays. What began as a festival three years ago morphed into a monthly family-friendly event with music, food, vendors and artists painting live, providing a way of increasing exposure for businesses, artists and the changing neighborhood.

"As the community here grows, businesses grow and that helps spread the wealth around," Brewer says. "This area is just in its infancy now."

Artists interested in showing at the Well Art Gallery can begin by filling out the form on the its website. Although it's currently booked through next summer, Harris says it wants even more artists in the lineup.

Brewer's enthusiasm for the local scene is immediately apparent to anyone he meets. Pokog insists that it was Brewer's encouragement that led him to creating the Hip Hop adult coloring book, volumes one and two, the latter currently on sale at the gallery. "Without the encouragement of Ajay and others, I wouldn't have made the first book, much less the second. And I'm not the only one he's encouraged."

After digging into his family history —his father ran a barber shop at Decatur and Cowardin — Brewer realized that his ancestors had laid a path for him to follow.

"There were people here before us and they said to keep going," he says of helping grow the neighborhood. "There are über-talented people here. My slogan is: Manchester: It's a bridge. Get over it."

The Well Art Gallery is open on First Fridays and by appointment, 1309 Hull St., thewellartgallery.com.