A collection of the week's popular posts, controversies and other important bits. 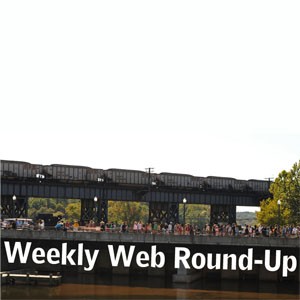 A Bit Folky
The 2010 Richmond Folk Festival rolled into town, with all the usual and much-deserved fanfare. If you skipped this Richmond-defining musical event (shame on you!) here's what you missed out on.

Folk Fotos
Speaking of the Folk Festival, Style Weekly photographer Scott Elmquist has posted a slidehow of favorite shots that he and photographer Ash Daniel grabbed at the folk fest this weekend. If you only see one photo of man in a majestically fluffy green head dress this week, make sure you see it here.

Enter to Win
Hopefully, our photographers' shots will inspire you to send you own Folk Fest photos to styleweeklyphotos@gmail.com. At the end of the week, we'll root out the best photos and the winner will receive a family four-pack of tickets to Theatre IV's "Ferdinand the Bull".

Dueling Dangos
If you've been to the newly renovated Virginia Museum of Fine Arts, you've probably noticed the giant ceramic heads populating the grounds like visitors from Easter Island. Curator John Ravenal answered six questions about scupltor Jun Kaneko's dangoes -- which is Japanese for "dumplings". We suggest you don't try to put them in your soup.

Scared Straight
Last week, food critic Robey Martin wrote about the state of the plate in Richmond's gay bars. Her general disappointment with the food, decor -- and sometimes, cleanliness -- of the bars sparked much discussion in the comments. Whether you're a staunch Drag Brunch supporter, or a detracor of Richmond's gay night life options, let us know your thoughts.

Punch Drunk in Berlin
Bar columnist Jack Lauterback spent some time in Berlin last week at one of Europe's premier bar trade shows. He has since returned, aching liver in tow -- but you can relive his adventures abroad here.

Tea Party Troika
It was a triple shot of tea partying on StyleWeekly.com. In the opinion section of the site, Arts Editor Don Harrison and contributing writer Peter Galuszka questioned the decision of the Virginia tea party to hold their anti-government, anti-tax spending rally at the Greater Richmond Convention Center downtown this weekend. Harrison describes the convention center as "a huge, $350 million tax burden that hasn't lived up to its promises".

In response, the Richmond Times-Dispatch called the criticism “painfully stupid” in its lead editorial Saturday morning. News Editor Scott Bass fired back in a blog post, saying that it was "too bad our state capital's daily newspaper, our supposed government watchdog" didn't think the tax/anti-tax connection wasn't worth making.

Finally, reporter Sara Dabney Tisdale describes the sights, sounds -- and cottage industries -- that were on display at the tea party convention.

Send any feedback to letters@styleweekly.com.