C. Wayne Taylor gets it on the record. 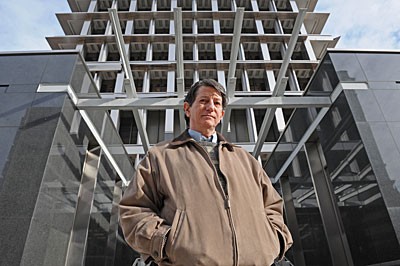 “I've been waiting for somebody to bring this up,” the smiling man says, lingering over a Greek salad at the Crazy Greek.

Reporters have learned to listen closely when C. Wayne Taylor, the Richmond city government's self-appointed ombudsman, is onto something.

“In the Freedom of Information Act,” Taylor continues, pulling a sheet of paper from his pocket, “one of the requirements is that the City Council minutes contain a summary of the discussion of each item brought up before council … and it's not there.     There's no written account of the meetings, and it's required by law. Either the city attorney's aware of this or he's not.”

A few days later, Taylor, 59, asks the Virginia Coalition for Open Government's freedom-of-information council for a nonbinding opinion on whether or not City Council has been unlawful in reporting its minutes. He'll also ask for a ruling on whether council has been properly conducting closed meetings.

In just a few short months, Taylor has become a major thorn in the side of City Hall, the first to warn that the city's noise ordinance was unconstitutional and that something was screwy with the city's towing contract. Taylor, who lives in the 1st District, has since built a website about Richmond government (cwaynetaylor.com/city) that covers laws, codes and procedures; in the absence of official summaries of council meetings, Taylor posts his own.

“The noise ordinance is what really got me [into] following what goes on at City Hall,” he says. “I called someone at City Council and they put me on a list to let me know when the public process would start on hearing input from citizens. The next thing I knew, months later, they had gone ahead and drafted it.”

The resulting law shocked him. He posted it on his website and blogged about the process. Months later, a Richmond judge eventually agreed with Taylor and other critics that the noise law was unconstitutional — a major embarrassment for City Council, which largely ignored Taylor and just about all residents' input.

Taylor knows a bit about how the process is supposed to work. His career has traversed freely through urban planning, government and the law. The Louisa County native got his business degree from Virginia Commonwealth University and went on to win law honors at the College of William and Mary. Real-estate lawyering drove the solo practice he established in Fredericksburg after graduation; it was there that he began working with urban planners on Northern Virginia projects. “I caught the bug,” he says.

He went back to school to get his degree in urban planning from the University of Florida and soon was picked to start a planning department in Spotsylvania County. “The wave from Northern Virginia was just rolling right over them,” he recalls.  “They gave me some bare floor space and basically told me to start a department.”

He stayed for six years before retiring in 1994. After a bit of traveling, he moved back in 1997. “I really hadn't paid much attention to city government to that point,” he says. “Even when I was a student at VCU, the reputation of city government was terrible. People would say, ‘Move out of the city as fast as you can.'”

Recently Taylor's efforts have focused on the city's towing contract. “That one caught my attention because of the idea of changing the towing rate after the public procurement process was finalized. ... There didn't seem to be any public purpose for it, let's put it that way.”

When it was discovered that people who got towed were being charged a higher rate than was stipulated, Byron Marshall, the city's chief administrative officer, announced that he was going to raise the towing rate retroactively. “The problem is that he doesn't seem to have the authority to do that,” Taylor says, shaking his head. “It makes no sense. … If you solicited bids and the person said, ‘I'll do it for X,' why would you turn it around and pay them more than X?”

Taylor filed a request for any document that granted Marshall the authority to bypass the contract. When the mayor's right-hand man didn't respond, Taylor threatened to take him to court. That's when Marshall got back to him, politely informing that no such document existed.

All of this astounded Taylor. “It's like ‘Mayberry R.F.D.' up there,” he says.

“I'm appreciative of the fact that he has concern about the city and I welcome his input,” 1st District Councilman Bruce Tyler says of Taylor. “But I think he sometimes pushes the envelope when it's not necessary. Take the towing controversy, for instance. It was everyone's intent to raise the rate from X to Y. This was an honest mistake and I think he's turned it into a rallying cry.”

At press time, Tyler hadn't read the council opinion that answered his questions about City Council procedures. “It would appear that [council] violated FOIA by effectively holding a closed meeting (excluding the public from hearing the discussion), but without following the proper procedure to do so,” chief counsel Alan Gernhardt writes.

Questions about this opinion — which concludes that City Council isn't following the law — were left unanswered by the mayor's office, while city attorney Allen L. Jackson declines to respond, citing attorney-client privilege.

“To date, no changes have been made to procedures followed by my office as a result of this opinion,” City Clerk Lou B. Ali informs Style Weekly. “However, I am quite sure I will review our minutes and the current process which drives their creation.”

These official answers — filled with silence, uncertainty and bureaucratic double-speak — don't faze soft-spoken Taylor. He says he's used to it. “They don't operate City Council like a business,” he says, smiling. “It's just absurd.”