The Walls Are Alive

At the new Sound of Music, analog thrives. 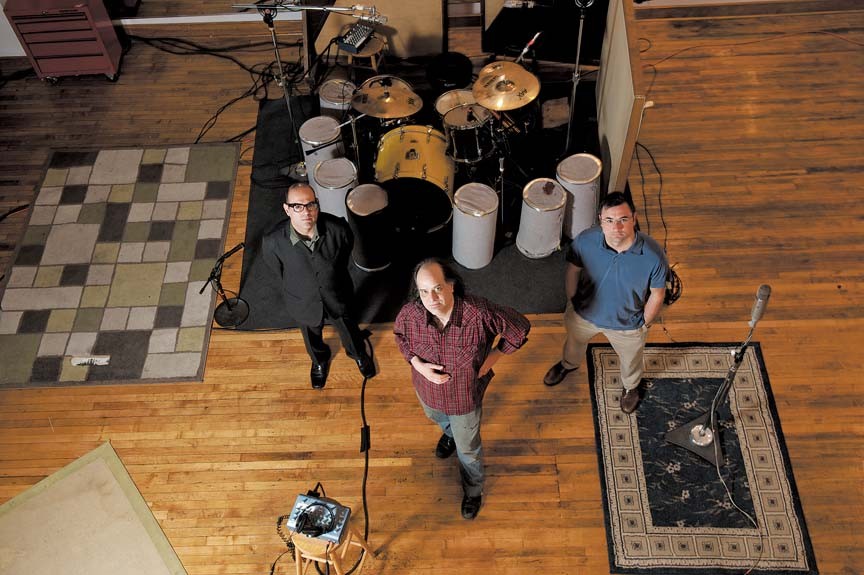 When Richmond's Sound of Music recording studio opened in 1994, among the equipment its owners started out with was a 1975 MCI 400 console that San Francisco recording engineer Wally Heider used to record such wide-ranging '70s music legends as the Grateful Dead, Linda Ronstadt and Fleetwood Mac. The guys at Sound of Music dubbed it the Millennium Falcon.

Nowadays, the remnants of the Falcon are scattered among the innards of various audio mixing boards at Sound of Music's new studio at 209 N. Foushee St.

"I don't think any of us are really big 'Star Wars' fans," says studio co-owner, producer and house drummer Miguel Urbiztondo, recalling the name's origin, but "there were a lot of times when Chewbacca and Han Solo were underneath the rocket ship fixing it. That totally reminds me of Sound of Music."

Just as Solo cobbled together parts from dozens of ships to create his souped-up intergalactic ride, Sound of Music's owners have compiled a stellar smorgasbord of the best recording equipment from the 20th and 21st centuries — from a 1950s Telefunken microphone to 1980s Amek and MCI/Sony audio consoles to a brand-new, state-of-the-art Pro Tools digital mixer — all in the name of producing the best sound possible.

Co-founded by Cracker and Camper Van Beethoven frontman David Lowery, Sound of Music has played host to a bevy of well-known musicians through the years, including Hanson, Joan Osborne, Sparklehorse, Nina Persson of the Cardigans, Daniel Johnston and members of Counting Crows and Ben Folds Five, as well as Richmond's own Lamb of God and Carbon Leaf. Famous engineers and producers who have recorded at the studio include the late Don Smith (the Rolling Stones and Tom Petty) and Steve Fisk (Nirvana and Soundgarden).

Lowery remarried and moved to Athens, Ga., not long ago, selling his share in Sound of Music, but he remains the studio's No. 1 client. His critically acclaimed first solo album, "The Palace Guards," released earlier this year, was recorded at Sound of Music.

Today the studio is owned by Urbiztondo, producer John Morand, McGuireWoods lawyer Craig Harmon and local musician and producer Kyle Crosby. The group also runs a Sound of Music branch in Belgium, where they record emerging European artists. Their staff includes producer and guitarist Alan Weatherford and engineer Bryan Walthall. The team is working on albums from up-and-coming Charlottesville band Sons of Bill, which has ties to the Dave Matthews Band, and Richmond punk group Unholy Thoughts.

Sound of Music moved its Richmond studio to Foushee Street in October, after the group was displeased with renovations to its old West Broad Street studio, which was damaged by a 2007 fire that started in a vacant, abandoned next-door building owned by infamous city slumlord Oliver Lawrence.

A former photographer's studio, the new space boasts an enormous, two-story-high performance area with polished hardwood floors, a tin cathedral ceiling, a mirrored wall and a wraparound, second-floor balcony. Best of all for Sound of Music's engineers, the studio's walls meet at asymmetrical angles. "Nonparallel walls are really good for a studio," creating better acoustics, Morand explains. Harmon adds: "That's one of the things people attribute the Stax [Records] sound to" — that its studio was a former movie theater with a sloped floor.

"This is a big studio," Urbiztondo says. "I don't know if there are any studios within at least a seven-hour driving radius that come close to this." He says clients have compared it to the legendary Bearsville Studio, which recorded Bob Dylan, the Band and Janis Joplin.

By the 1970s and '80s it was the vogue for recording studios to consist of small, soundproof rooms, sometimes so cramped that bands physically couldn't fit in the room at the same time and were forced by necessity to lay down separate audio tracks.

In Sound of Music's new recording space, a large, multipiece band can play together simultaneously. Sound of Music even encourages bands to hold and record live concert events at the studio — indie-rock versions of the Americana concerts sponsored by JAMinc at the competing In Your Ear studios. Local musician Chris Farmer, for example, recently recorded a live concert DVD at the new studio.

In a world of auto-tuned, computer-processed hits, Sound of Music is dedicated to capturing a more genuine sound, trying to reproduce live performances, Morand and Urbiztondo say. In a major departure from most recording studios these days, they prefer to record sessions on old-school tape, rather than digitally, though they can do that too.