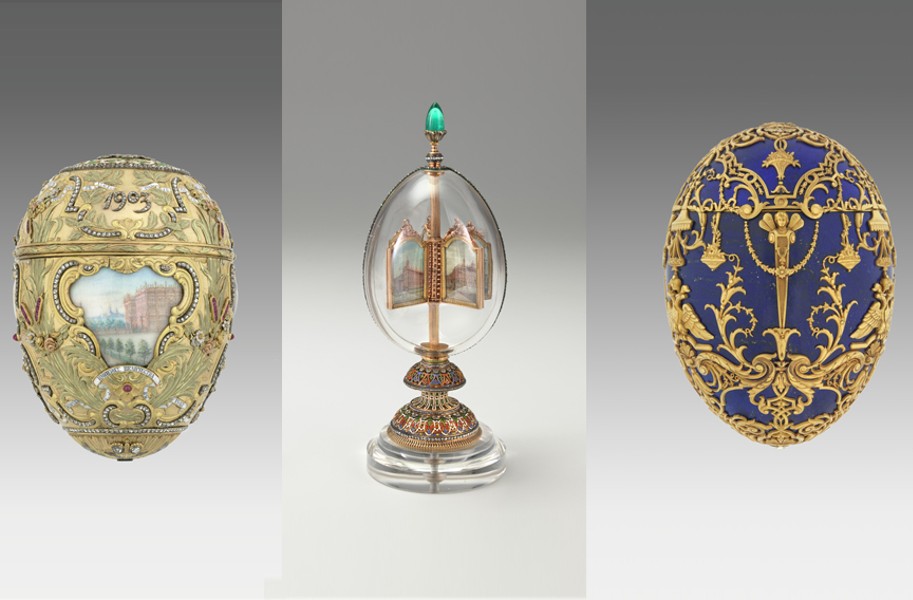 If you travel to any town, large or small in, say, England, Spain or Mexico, more than likely there’s a piece of art that the natives will insist you see. If you don’t rest your eyes on it, the locals will scoff that you haven’t truly experienced the place.

For those visiting Richmond, what’s that special thing?

Jean Antoine Houdon’s marble likeness of George Washington at the State Capitol might top the list, but it’s a little stiff. The swan bed at Maymont is worth a trip, but somewhat over the top. Perhaps a tour of murals or a trip down Monument Avenue, but that takes gas money.

Which leaves the Fabergé jewels at the Virginia Museum of Fine Arts.

Haven’t they been out of sight for a few years? Yes. But they return to view Oct. 22 — 280 objects strong and dazzling, in a suite of galleries comprising a much enlarged and enhanced exhibition area than before.

Four spaces are devoted to a sampling of the output from the international outfit led by jeweler Carl Fabergé (1846-1920), including five Russian imperial Easter eggs. Visitors also may visit an adjoining fifth gallery, which displays decorative works characterizing old Russia. Here, in addition to religious icons, a focus will be the recently acquired neo-Russian table, fashioned circa 1900 in a carpentry workshop in Sergiev Posad, near Moscow.

The oak table, from a larger set in the museum collection, is decorated with hammered brass panels inset with colored glass and faux gems and depicting motifs from Russian fairy tales. Because this elaborate example of Russian arts and crafts work is unique to a U.S. museum, it’s a special complement to the museum’s significant collection of European arts and crafts.

The addition of the old Russia gallery to those displaying Fabergé works also adds a significant historical and aesthetic cultural dimension to understanding the times and cultures that produced these eye-popping pieces.

Fabergé, with galleries in France and Russia, created objects for Czar Alexander III and Czar Nicholas II, as well as their immediate families and other European royalty and aristocrats.

Carl Fabergé expanded the family jewelry operation that his father had started and began fashioning a series of 52 imperial Easter eggs, enhancing the jeweler’s reputation and fame. The Empress Maria Feodorovna, the wife of Alexander III, was the recipient of 30 of these masterworks. Her daughter-in-law, the future Czarina Alexandra Feodorovna, wife of Nicholas II, the ill-fated last czar, came to own 20 of the imperial eggs.

The Fabergé firm, which at its height employed some 500 craftspeople, produced more than 150,000 pieces of jewelry, silver and precious objects. Many of the works were destroyed during the 1917 Russian Revolution. After the execution of Nicholas II and his family, the Fabergé workshops and retail galleries were closed.

In this new installation, each of the five eggs in the museum’s collection will be given its own showcase and can be viewed from 360 degrees. Like most of the objects throughout these galleries, they’ll be displayed against dark-blue velvet.

While there are nine other imperial Easter eggs in the United States, when these five eggs are combined with the other 185 Fabergé objects in the museum’s collection, it comprises the largest public collection of the jeweler’s objects outside of Russia.

If the juxtaposition of objects of such exquisite beauty with the history of the brutal end to a royal regime that reigned with its own brutality weren’t cinematic enough, the story of how most of these precious objects found their way to the Boulevard is also dramatic.

In the mid-1930s, during the depths of the Great Depression, a Fredericksburg resident, Lillian Thomas Pratt, started to collect Fabergé objects as her budget allowed. Not to worry, her husband was a top executive at General Motors.

But she wasn’t fabulously rich and, like many collectors, Pratt had to plan and budget her acquisitions carefully. Often she worked out a payment plan with dealers who appreciated her expert eye and deep appreciation for the pieces. Miniature eggs were purchased for $20 to $50, the imperial Easter eggs were considerably more, as much as $16,500. The Fabergé objects had made their way, piece-by-piece, out of Russia during the Stalinist regime.

Pratt displayed her ever-growing collection of eggs, jewelry, picture frames, flowers and other precious objects in a showcase in her living room. She often expressed concern that the shelves would collapse. Fortunately, they never did.

In 1947, after her death, the bequeathed pieces came to Richmond. John Lee Pratt underwrote the costs of the initial gallery installation of his late wife’s collection at VMFA.

As farsighted and generous as the Pratts were, they couldn’t have imagined the bells and whistles that come with this 21st-century installation. They include four in-gallery interactive screens, a downloadable mobile application and a new website for archives and research. An interactive in the old Russia gallery will allow users to follow the Russian fairy tale of Ivan and Grey Wolf through a parallax scroll feature. Another interactive near the miniature eggs will give gallery visitors the opportunity to select certain design features and create custom egg designs.

Support for the new Fabergé and Russian Decorative Arts galleries is provided by Eda Hofstead Cabaniss, the Commonwealth of Virginia and the Council of the Virginia Museum of Fine Arts.