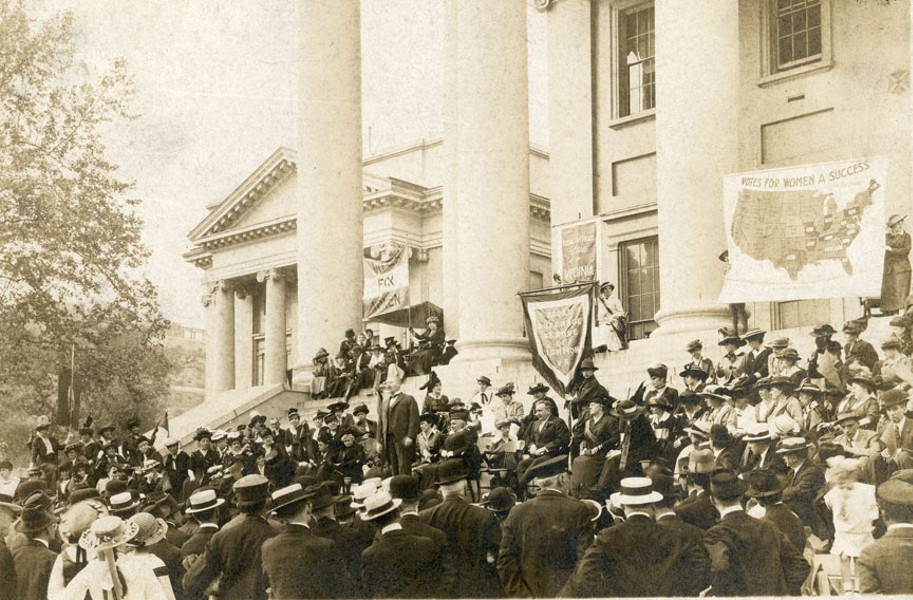 Photo courtesy The Valentine Women convene at the State Capitol for a suffrage rally in 1916.

When polite conversation results in no change, the next step is uncomfortable.

The Valentine, taking a cue from Albert Einstein's advice that problems can't be solved using the same thinking used when we created them, plans to tackle big issues head-on with a series called Controversy/History. The series is aimed at examining contentious, modern-day issues by comparing historic debates with current data on the subject.

For years, the Community Conversations series provided a look at a common topic, whether a neighborhood or an issue such as recycling or transportation. "Those were effective at bringing people together," recalls the Valentine's director, Bill Martin. "What was missing was a deeper dive and information to make a difference."

Social entrepreneur Kelli Lemon thought it sounded like a great way to start different conversations in Richmond. "I wanted to be involved because this series will force uncomfortable dialogue and allow us to come up with ways to move forward with data and facts to support these historical discussions and how they relate today."

Martin and Lemon will face off by sharing biographies of two historical people on opposite sides of an issue. For the first installment on voting rights and redistricting, they'll represent Alice Dooley, an ardent opponent of women voting, and Lila Meade Valentine, co-founder of the Equal Suffrage League of Virginia.

That's followed by the deep dive, a presentation by current experts on how the issue has shaken out over time. Next comes a moderated discussion, and because the first event coincides with election night, its topic will be whether participants voted and why or why not. Evenings conclude by providing a handful of tangible ways to get involved.

"By the end of each evening, we should be able to see where we've made tremendous progress and where we're still having the same conversations," Martin says.

The series runs through April and topics — voting, monuments and tourism, immigration, and the interstate highway system — reflect the Capital Region Collaborative's priorities and are timed to coincide with when these issues are most relevant.

"Some people may have an uncomfortable time discussing these things," Martin says. "Kelli and I are going to have a great time engaging people with it. Everyone's invited because we want to bring together very different audiences."

Lemon hopes to attract people eager to move Richmond forward and make it more inclusive. "I love how a simple conversation can open eyes and minds of people who may not have all the information about a topic or just need to see things from a different prospective," she explains.

The thinking is that it's helpful to have the perspective of what people in the past thought about issues in order to move forward.

Martin puts it more plainly. "You're either going to help make history or be lost in this country." S