The Valentine Explores the Diversity of the Latino Experience in Richmond 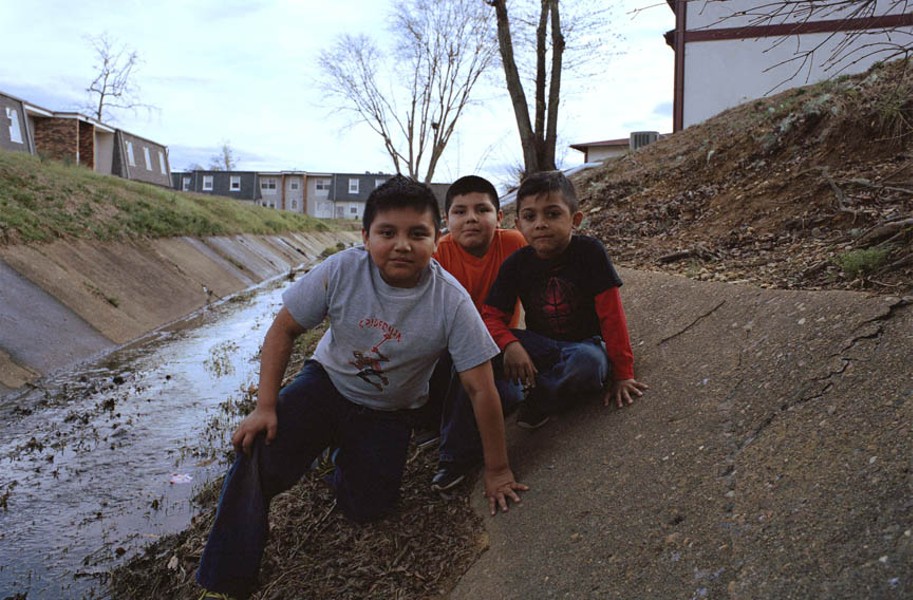 Kids play in a ditch in an area known as La Mancha in Southwood in a photo by Jose Henriquez Jr.

In a photograph of Federico Xol, the mustachioed Guatemala-born man stands in the middle of the frame staring into the camera without smiling.

Xol is positioned on the shoulder of a road with Jefferson Davis Highway and Chippenham Parkway signs slightly blurred in the background. It is not an elegant setting. A viewer feels nervous about Xol's safety given the potential for speeding traffic.

The photograph is part of the Valentine museum's new exhibit, "Nuestras Historias: Latinos in Richmond," which documents the region›s diverse Latino experiences.  After listening to Xol tell his story in Spanish, which plays continually, it becomes clear that this spot is significant because it was his first encounter with Richmond. This was the place where he met his brother after descending from a bus, following a long journey atop the infamous Bestia, or Beast train, which thousands of Central Americans precariously ride through Mexico on their way to the United States. He made the dangerous journey because of conflict in his homeland.

Through interviews, objects and images, "Nuestras Historias" — which means "our stories" in English — is the first exhibit of its kind at the museum and the first to include completely bilingual signs. It notes that there are approximately 100,000 Latinos living in the Richmond metropolitan area who represent many backgrounds.

Though its website, the museum explains the goal of the exhibit: to tell the smaller stories of Latinos who immigrated to Richmond as well as the larger story of how the group established permanent ties through institutions and businesses, and began to transform Richmond's culture. The Spanish, it reminds us, were some of the first explorers to travel up the James River.

One of the first Hispanic-owned institutions in the Richmond area was the restaurant La Siesta Mexica opened by the Zejur family in 1972. Included in the exhibit is the original wooden Siesta Man that was meant to symbolize Mexican culture but it holds a negative connotation now.

The Zejur family's previous restaurant, Michel's Lunch, was open from 1960 to 1970 and was one of the first restaurants in the city to welcome customers of all backgrounds. Today Michel Zejur runs the Virginia Hispanic Chamber of Commerce, a booster organization that helps businesses owned by Latinos and aims to bridge cultures between people.

The exhibition — with 17 photographs, eight audio pieces, 41 objects and one video — is designed to be a sensory experience, broken into different themes. The show explains Latino residents' different roads to Richmond, explores racial identities that go beyond black and white, and tells of frustrating experiences in schools. It also details the group's efforts to create community and explains efforts to hold onto cultural roots while discussing political engagement.

In an audio interview, Hector Barez, the Puerto Rico-born percussionist for the band Bio Ritmo, explains how confusing it is for people to see a person of African descent speak Spanish — and how annoying it is for him to explain his identity.

While the subject matter here is timely because of the current aggressive political climate toward immigrants, museum director Bill Martin says the show "looks a lot at what happens when you don't see yourself fitting into categories and how to shake up racial binaries."

"At the museum, a lot of the topics are a part of the news and a part of the conversation that people are having in town," he says.

"Nuestras Historias" was managed by the museum's Latino Project coordinator, Wanda Hernandez. She, with Laura Browder, who teaches in the University of Richmond's American studies department, and UR theater professor Patricia Herrera, worked with the Richmond Public Library and the Sacred Heart Center, which offers education and outreach programs for adults and children. Together they conducted the interviews. "It's a small gesture of inclusivity," Herrera says. "There are challenges with opportunities. The exhibition is about those obstacles. The spotlight necessitates serving a population that has been neglected."

She points to a lack of services in Richmond for the growing Latino community. There are only two Spanish-speaking librarians in the city's system, not enough bilingual and second-language instruction in the schools and only a handful of police who can speak Spanish.

The exhibit opened with celebratory flourish and will present programming for families, school groups and adults throughout the run.

"It's really good when you learn about different cultures," said Zejur, who never thought he would see so many Spanish speakers in Richmond. "It makes you see how much we are alike."

"Nuestras Historias: Latinos in Richmond" at the Valentine runs through April 15 and also will present programs for families, school groups and adults. thevalentine.org.