“Prince of Persia” assembles the makeup-smeared masses from other Disney adventure movies. 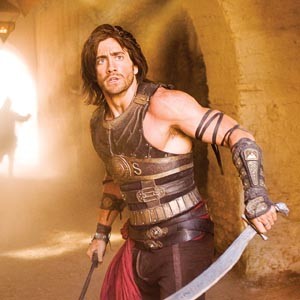 Ancient Persia, according to the intro to Disney's latest family adventure, is “a land far away.” Not when you're watching it in China — and overseas is likely to constitute a hefty chunk of ticket sales for “Prince of Persia: The Sands of Time.”

True, we shouldn't expect complete sense from a movie based on a video game about a guy who runs up walls and wields a dagger that reverses time. But by the time you get to “a land far away,” the movie already has admitted what a bland and generic ride it has in store. Faraway lands are something to inspire the imagination, but none of these lands look far away. They look entirely generated on a computer, like a video game. We get video-game story, video-game characters and video-game dialogue to go with them.

Much of “Prince” unfolds in a place called the Valley of the Slaves, but it could also be called the Valley of the Leftover Props from “Pirates of the Caribbean.” The movie follows Dastan (Jake Gyllenhaal) and Tamina (Gemma Aterton), a prince and princess, respectively, who've lost their kingdoms and are trying to win them back. Ben Kingsley plays the shifty-eyed villain. He urgently desires the Dagger of Time, an ancient device that could have spared us two hours of life if only someone had thought to press its red power button at the beginning.

In a Memorial Day Twitter post, Roger Ebert interpreted the weekend's surprising box-office low as a statement about summer-movie fatigue. Perhaps. How many more overbudgeted, underimagined, swashbuckling computer-generated extravaganzas like this can the public buy? “Prince” is a pointless and predictable blend of furious motion and canned music, remarkable only in its confusion (An ostrich race? Really?) But that's what every movie this summer is shaping up to be. “Everything changes with time,” the princess tells us. Not exactly wise words, but let's hope not completely naive either. (PG-13) 115 min.  * S