Barksdale's "God of Carnage" is simultaneously brutal and funny. 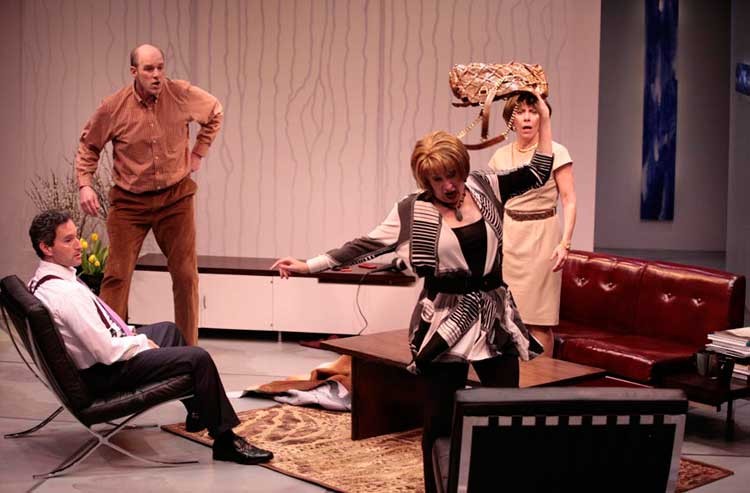 In one of the most memorable scenes of the film "Chaplin," Robert Downey Jr., in the title role, states that America is a great country underneath it all. No, replies Kevin Kline's Douglas Fairbanks, it's a great country on top. It's underneath where you run into trouble.

The truth of this insight is driven home in Barksdale Theatre's unflinching rendition of French playwright Yasmina Reza's "God of Carnage," in which what's going on underneath rears its ugly head with some wickedly funny consequences.

Two 11-year-olds have gotten into a physical altercation, and one of them has lost two teeth. To deal with the fallout of dental bills and conflict resolution, the children's fiscally comfortable parents meet. They begin to settle things like civilized adults, but the thin veneer of civility soon wears away to expose brutality and selfishness.

Susan Sanford's Veronica refuses to settle for a simple apology, which drives the show into angry territory. Sanford manages to be both funny and authentically enraged — not an easy task. Jay O. Millman plays Veronica's husband, Michael, a man who admires John Wayne but is afraid of rodents. Millman portrays Michael as pure id, a Neanderthal mainly concerned with himself.

Dan Stearns plays Alan, a corporate lawyer whose cell phone has become an extension of his hand. Stearns' cold and cunning portrayal works perfectly for a character who openly admits he worships the god of carnage in all of us. Jan Guarino, as Alan's wife, Annette, captures the frustration and anger of a woman weary of her husband's distance.

This excellent cast is able to make all of the script's more ridiculous aspects (vomiting, destroying property, etc.) believable, and Bo Wilson's direction never misses a beat. Every pause and explosion is perfectly timed to make the dark humor sizzle. Christian Hershey's chic set design denotes the wealth and taste of Veronica and Michael, and the Eye of Sauron fur on the wall hints at the presence of evil in even the most seemingly benign places.

Carnage shows a Barksdale willing to take on riskier territory while producing the family-friendly fare for which it is celebrated. Brutal and darkly funny, "Carnage" is magnificent. S

God of Carnage plays at Barksdale Theatre at Willow Lawn through Mar. 11. Tickets are $19-$38. For information, go to barksdalerichmond.org or call 282-2620.