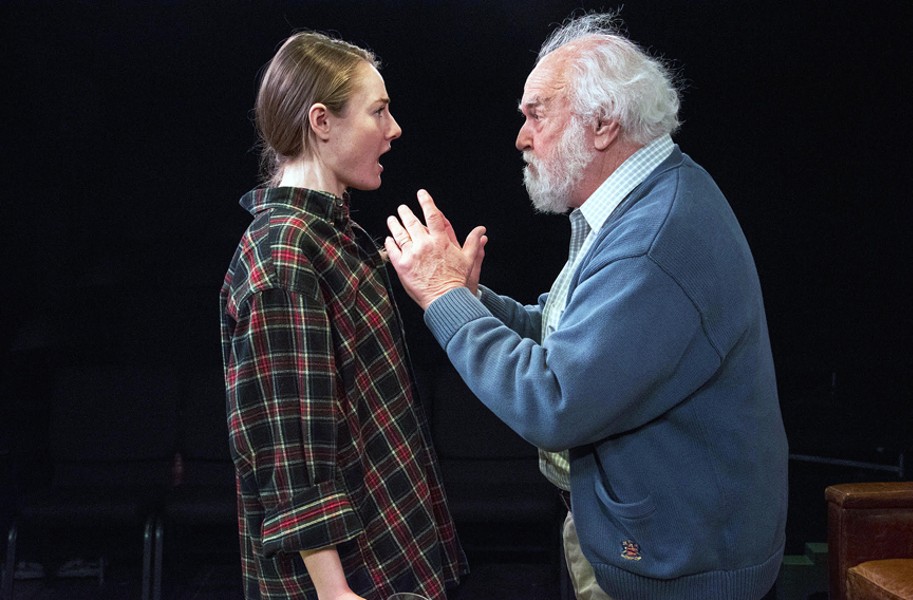 Given his numerous appearances as TV spokesman for ChildFund International —previously called the Christian Children's Fund — chances are, you're already familiar with local actor Alan Sader.

With his sonorous voice and Santa Claus beard, Sader served as the organization's television face from 1992 through 2016, kindly imploring viewers to assist hungry children around the world. In Halley Feiffer's "I'm Gonna Pray for You So Hard," the latest play to hit TheatreLab's basement stage on Broad Street, Sader is playing a decidedly different role.

"The best thing that he'll have in common between those two [roles] is he will still have a beard," jokes Liz Earnest, Sader's co-star in the two-person show. "He's kind of like everyone's grumpy uncle in this play."

In "I'm Gonna Pray," Sader portrays David, a Pulitzer Prize-winning playwright with a nasty streak. Earnest plays his daughter Ella, an aspiring actress. The show begins on the evening of Ella's off-Broadway debut, with the duo staying up late into the night consuming alcohol and other impairing substances.

"We so rarely see stories about fathers and daughters," Gray says. "This dynamic is really interesting, and I think the work that Alan and Liz are doing is some of the best storytelling I've seen in a long time."

When he first read the play, Gray immediately knew he wanted Earnest and Sader.

"I couldn't think of anyone but the two of them," Gray says.

For Sader, the show has some interesting parallels with his own life: he and his younger daughter Mary Sader both work in theater (she's a scenic designer, recently giving shape to the set of Quill Theatre's "Brave New World," which plays through Feb. 17 at the Cultural Arts Center at Glen Allen). Like his character, Sader also became a father later in life, but says the similarities pretty much end there.

Sader says David "curses with the best and worst of them," and that he's enjoyed giving life to a character so different from himself.

"He makes some mistakes by being a bad example to her, and belittling her for not doing things his way," Sader says. "While he, as many parents are, absolutely sure that they know how to raise a child, they may be doing great damage."

Though ostensibly a two-person show, Sader has the overwhelming majority of the lines.

"I'm working harder on this than any other show, including Lear," says Sader, referring to one of Shakespeare's most difficult roles. "The line burden is unbelievable. You flip [through my script], it looks like every page is highlighted top to bottom, and it almost is. It's an 80-page monologue."

Another challenge is the show’s set. Like all TheatreLab’s shows this year, the play will be performed with audience members on either side of the stage facing each other, playing off the theater’s theme this season of “Picking Sides.”

Though certainly not a family friendly show, Earnest urges people not to be scared off by the play's subject matter.

"It sounds pretty heavy, but it's very funny too," Earnest says. "It's a beautiful play.