In the run-up to the 75th Miss Virginia pageant, Victoria Maiden grabs the baton and takes on the world's problems. 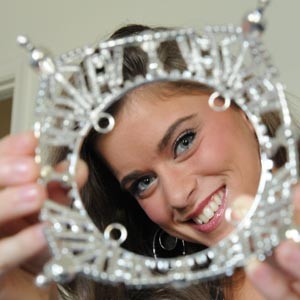 Maiden has been fielding practice interview questions for about an hour with Miss Chesterfield board member C.H. Faber Jr., a white-haired insurance salesman and 30-year pageant volunteer whose sister was Miss New Mexico in the 1980s.

Faber rattles off questions from a stack of papers propped on his knee — so far, they've covered terrorism, BP's Gulf of Mexico oil spill and the economy.

“Tell me something that will make me remember you,” Faber prompts. Maiden scribbles notes and nods calmly. She seems composed; the only overt sign of her relative youth in the Miss America pageant system — she's 19, competing this week in the Miss Virginia pageant for the first time — is the bobbing of one crossed foot.

That, and the fact that until a couple months ago, Maiden says she didn't have many opinions on politics or current events. Now, she must.

“Do you think you can make an impact on society, and if so, how?” Faber quizzes. “They're going to need to know.”

Faber asks Maiden if she'd like to review her platform: Redefining Beauty, which was inspired by Dove soap's Campaign for Real Beauty advertising program. She locks eyes with her audience, alternating her gaze between Faber and a reporter as she talks about the inner beauty of self-esteem.

As they wrap up the session, Faber advises Maiden to review the 40 questions he's recently e-mailed her, along with a handout printed from a blog called “Top Political Issues 2010.”

“There is so much information,” Faber says.

“To twirl in Japan is like a job,” says Diane Gunnels, the founder of the Royalettes Baton Corps, during a rehearsal for Maiden's talent routine in the gymnasium of Bailey Bridge Middle School in Midlothian.

A few years ago Gunnels, who's coached baton twirlers for about 30 years and walks with a limp from a knee injury from twirling, traveled to an international baton-twirling competition in Canada to find Japanese twirlers willing to choreograph routines for the Royalettes.

Gunnels has been Maiden's twirling coach since Maiden was 5. Since, she's become a national duet champion with her fraternal twin sister, Brittany; the sisters are studying at Piedmont Virginia Community College on scholarships awarded for their performances as the Sabre Twins in the University of Virginia's marching band.

Gunnels watches over Maiden's fast-paced series of twirling feats — byzantine neck and arm rolls, split leaps and lightning-fast baton throws and hand twists danced to a pumped-up remix of the song “Seasons of Love” from the musical “Rent.” A rogue baton can end in a hard blow to the face or hand — or worse, a broken thumb or nose. Maiden practices portions of her routine over and over, making adjustments and scrutinizing moves, before joining the Royalettes senior team rehearsal.

Brittany Maiden, Victoria's twin, answers the door of the Maiden house in shorts and a tank top. She's a sporty contrast to her sister, who sits down for an interview in a black and white summer dress and heeled sandals.

“She's so lucky,” Brittany says of her sister.

Maiden provides a run-down of her history with pageants. A resident of Mechanicsville, she competed in five preliminary competitions across the state before landing the Miss Chesterfield title. Miss Virginia contestants aren't required to be residents of the preliminary area crowns for which they compete. (Full disclosure: the owner of the Miss Chesterfield franchise is employed as an account executive at Style Weekly.)

Maiden talks affectionately about her sister — the twins were born on Valentine's Day, and Maiden shares their exact birth weights (born prematurely at 26 weeks: Victoria 2 pounds, 11 ounces; Brittany 2 pounds, 6 ounces), that she's older by 24 minutes and how she admires her sister's comfort without makeup. She answers questions about her baton-twirling visits to Peru, where she twirled in orphanages, nursing homes and public parades. “I never thought baton twirling could mean so much to people,” she says. “When I left I was feeling so proud to be an American.”

She details her eating and fitness routine — consuming 1,000 calories a day, Victoria has shed 10 pounds since coming home from school in mid-May — and her studies of the morning, afternoon and nightly news.

She shows off her pageant wear: Her twirling costume is a tiny skirted number of white chiffon and lace that “has over 4,000 rhinestones on it” — all hand-applied by her mother. As for the expense of it all, Maiden says her mom won't tell her the amount “because she knows I'll feel bad about it.”

But if she doesn't win or make the top 10 at Miss Virginia, Maiden plans to keep competing. She says she's grateful for the education she's receiving from her pageant instructors and says she feels she's already grown from the experience. For now, she's excited just to be going to the state pageant in Roanoke, which will feature the reigning Miss America, Caressa Cameron, who won Miss Virginia the previous year. The pageant begins Thursday and climaxes with a live crowning of the winner Saturday night.

“To be speaking in front of you, right now,” Maiden says, “obviously I have to have confidence.”