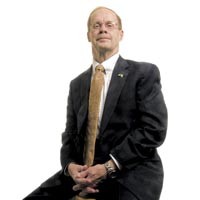 1. Virgil Hazelett
He's the calm amid the storm, the steady hand that guides Richmond politics and controls the region's top economic engine. This was a year of much upheaval, the collapsing economy and the recent elections serving as veritable twin wrecking balls of political empires and economic virility — great humblers of Richmond's elite. Henrico County Manager Virgil Hazelett remains the last man standing.

Hazelett isn't her. That's OK, because we needed a break. Some years, power isn't about expanding influence and control of resources, but carefully maintaining both. During the past several years, while most of the region focused on building subdivisions and canal walks, Hazelett was luring a stable of Fortune 500 companies to the county (Genworth Financial, Capital One, Philip Morris). He used the county's unique ability to build and maintain its own road network to help shape Short Pump into a new-and-improved near replacement for Richmond's decayed downtown.

Before Wilder announced plans to build a new ballpark in Shockoe Bottom, he went to Hazelett first for advice. The county leader didn't hesitate to give it: It won't work. Hazelett recounts the shock and surprise of Wilder's own underlings during the meeting. “[Wilder] asked my opinion and I gave it,” he says. “They were speechless — they'd never seen anyone talk to him that way.”

Of course Wilder ignored the advice. But shortly after Mayor Dwight Jones took office, he also made the trip to Henrico. Again, Hazelett reiterated that the deal wouldn't fly. You can't have your hot dog and eat it too. Investors won't buy 30-year bonds for a 20-year ballpark. A few months and $100,000 later, Jones' consultants told him the same thing. The developers pulled out and the project died.

So we should have been listening to Hazelett all along. County manager for the last 17 years, he's always been there, it seems, balancing the budget when everyone else was belt tightening and bickering. His stock rose considerably in the last few years after the longtime Chesterfield administrator, Lane Ramsey, retired and his good ol' boys were booted from the board of supervisors. While Wilder wreaked havoc in the city, local power brokers increasingly turned to Hazelett, who represents what they appreciate most: impassionate yet assertive fiscal conservatism.
Many things go into an analysis of power. Style introduced this list six years ago as a way to identify who runs this town and to what extent they do so. Who controls resources? Who works in power networks behind the scenes and in front of the cameras? Who can tap into formal and informal sources of power, and how is that strength exerted? After all, if you're going to hold people in power accountable for what they do, first you must know who they are.

The only knock on Hazelett is that he isn't a vocal leader; he doesn't impose his will. “Virgil doesn't pick up the phone and make inroads,” a fellow power lister says. His power is passive — everyone, it seems, wants to make inroads with him.

For now, he'll have to do. We probably needed an intermission from will imposers, anyhow.

Hazelett's measured, mellow baritone and measured, thoughtful monologues serve to sooth even the most ruffled resident during county government meetings, but it's this innate ability to sound like a reasoned, impartial arbiter that has transformed his office's conference room into the region's most trusted neutral ground.

2. Thomas F. Farrell II
Despite all the talk of a global energy crisis, Dominion Resources' chairman, chief executive and president remains electric (he's also on the board at Altria). Dominion remains a stable top performer with plans — albeit sometimes controversial — to expand electric generation operations. Locally, Farrell picked a loser in Robert Grey during the mayoral race. But he avoided a precipitous drop in the chutes-and-ladders game of Richmond political influence by playing his hidden aces — a roster of fellow Dominion execs who backed the winner — and his own leadership of the city schools' superintendent-search committee. While Goodwin (No. 3) backs off and Trani rides into the sunset, Farrell is now at the head of the table.

3. William H. Goodwin Jr.
Last year's No. 1 could still be the top dog, but he retreated to the sidelines after Wilder left office. The billionaire investor who made his mark selling AMF Bowling to Goldman Sachs in 1996 for $1.4 billion served on the School Board's superintendent search committee a year ago, and was working to bring peace at City Hall over the city charter (Did Wilder really have the power to fire City Council staffers?). Mayor Dwight Jones (No. 12) put an end to the fighting shortly after taking office, and the School Board appointed Yvonne Brandon against the committee's recommendation. So Goodwin, a fellow power lister says, “left for the showers.”

4. Rep. Eric I. Cantor
Congressman Eric Cantor drew attention early on with his fundraising prowess. Now the $500,000-plus sitting in his PAC, Every Republican Is Crucial — ahem, E.R.I.C. — has fanned speculation about a 2012 presidential run. As minority whip, Cantor is this year's biggest power jumper, up 21 spots from a year ago. He seems more visible in his own backyard too. Many people think he represents the future of the GOP's national platform, citing his packed district fundraisers and his regularity in taking aim at President Obama and Gov. Tim Kaine (No. 5) on Sunday talk shows. Though Cantor voted against the stimulus package and renounced earmarks, he's clamoring for federal cash to bring Richmond high-speed rail. If Republicans regain their majority, Cantor, the Republican whip, stands to be one of the largest beneficiaries.

5. Gov. Timothy Kaine
Although having the president on speed dial never hurts, formally, Gov. Tim Kaine's power diminishes with his time in the Executive Mansion ticking down. Kaine is in the unfortunate position of being in command during the worst economy since the Great Depression, with nothing left to do but the dirty work: more budget cuts, rest-area closures, dissatisfaction with the state's private information technology contract. His election sidekickery landed him a second job heading the national Democratic Party, but it's difficult to say the day and a half it requires each week hasn't distracted from running the state. Kaine's next report card will come with the results of the next two elections — but high-level future employment shouldn't be a problem.

6. Michael E. Szymanczyk
When the economy is depressed, people smoke more. This is a good thing for Szymanczyk, chairman and chief executive of Altria Group, parent company of Philip Morris USA, both with headquarters in Richmond. The city's corporate elite took a beating during the last 12 months, but Philip Morris keeps churning out big profits. And that's been good for Richmond in a year of bad news. Szymanczyk, who made $23 million in total compensation last year, has become more active in the community in the last two years, and the company gives away millions of dollars. In this economy, Altria helps to ease our pain — as long as we're not one of the 400,000 people who die this year from smoking.

7. Allison P. Weinstein and the Weinstein Family
While real estate and the rental markets take a hit, good deeds of years past have buoyed the family that owns and manages more than 10,000 rental units in Richmond and North Carolina. The company continues its growth into the Petersburg area, poised to capture business from the Fort Lee expansion. The Carole Weinstein International Center at the University of Richmond — named for the matriarch and her $9 million donation — is under construction and scheduled to open in fall 2010. It will be the second major campus building to bear the family name. This year Allison Weinstein and her husband, Ivan Jecklin, were honored by the Richmond Organization for Sexual Minority Youth for their work on gay-rights issues.

8. E. Claiborne Robins Jr. and Family
The philanthropic profile of E. Claiborne Robins Jr. only increased in the last year. In the spring he became the first person to be honored with the Distinguished Virginian Award from the Virginia Sports Hall of Fame, recognizing him, in part, for his efforts years ago to open the Robins Center at the University of Richmond. The wine-importer is a lifetime trustee at Maymont, a huge supporter of the Richmond SPCA and recently gave $100,000 to his alma mater, St. Bridget School. But perhaps his biggest transaction came in March with the sale of his ECR Pharmaceuticals company to Hi-Tech Pharmacal Co. for $5.1 million — with the possibility of earning another $4 million in performance incentives.

9. Stanley F. Pauley
Stanley Pauley, the 81-year-old chairman and chief executive of the Carpenter Co., oversaw $1.6 billion in revenue in 2008, down a half-billion dollars from 2007, and mass layoffs: approximately 4,800 employees, 415 of them in the Richmond area. But Carpenter, which manufactures, among other things, foam for pillows and cushions, has been ramping up of late with the launch of its national “Sleep Better. Dream Bigger campaign.” Pauley and his wife, Dorothy, are leading Richmond philanthropists, and their generosity is on display in September with the opening of the downtown performing arts center, CenterStage, and its Dorothy Pauley Square.

10. Michael D. Fraizer
Michael Fraizer, chairman and chief executive of Genworth Financial, moves up in large part by default. The Henrico-based financial giant took big hits in the real estate meltdown, but quickly made moves to staunch the bleeding. The company paid off the last of its long-term debt earlier this year (about $331 million), and is rebounding nicely after a series of layoffs, which included 400 people in Richmond. Some people say Goodwin (No. 3) and Co. is grooming Fraizer to become more of a player in Richmond. If he heeds their advice, he could easily break the top five in a year or two.

Back to the cover story