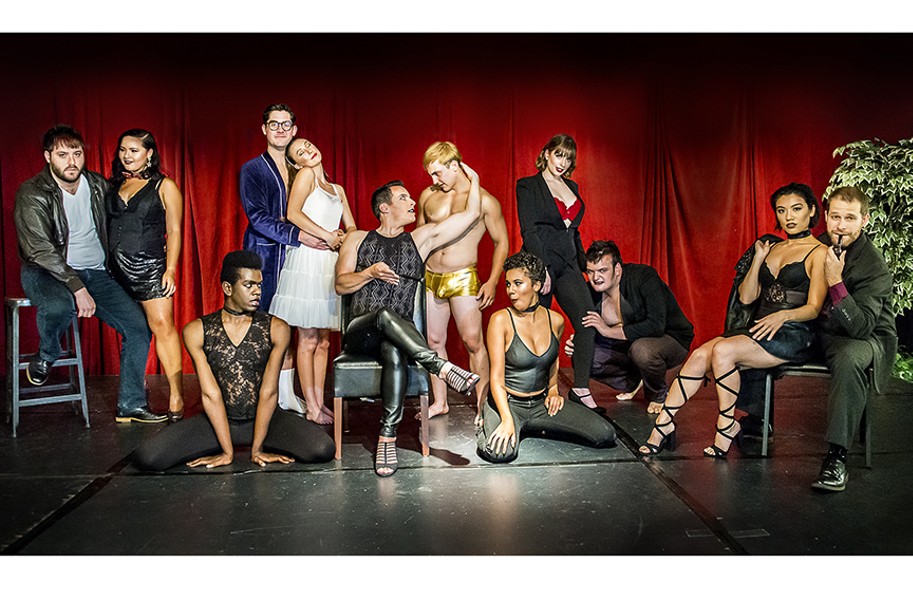 The colorful cast of Richmond Triangle Players’ “Rocky Horror Show,” which had sold out its short run as of press time.

Update 10/11: This show has sold out of all its performances.

Through a laborious audition process and a change of directors, local actor Jim Morgan recalls having to “fight tooth and nail” to win the part of Dr. Frank-N-Furter in Barksdale Theatre’s 1998 production of “The Rocky Horror Show.”

The final request of him? The new director and producers wanted to see his legs.

“I literally just dropped my trousers right there in the theater,” says Morgan. “Maybe it was my legs that won [the part].”

Some 21 years later, the 48-year-old is donning his oversized heels again to portray the “sweet transvestite from Transsexual, Transylvania,” in the Richmond Triangle Players limited two-week run of the cult classic.

Just like the 1975 movie it inspired – starring Tim Curry, Susan Sarandon, Barry Bostwick and Meat Loaf - “The Rocky Horror Show” is a camp musical comedy that pays tribute to old science fiction and horror movies as it tells the tale of an engaged couple who stumbles into the home of the mad cross-dressing scientist Dr. Frank-N-Furter. In addition to being a rollicking good time with an infectious glam rock soundtrack by creator Richard O’Brien, the show is considered one of the first popular musicals to depict gender and sexual fluidity.

For Morgan, seeing “The Rocky Horror Picture Show” in 1988 as a teenager made him feel like he’d found his people.

“It was kind of love at first sight,” says Morgan, who was trying to figure out his sexuality at the time. “Seeing that community come together, where all the boundaries were down and people could just fully express themselves without judgment, it was very liberating.”

The show holds a special place for director Michael Hawke as well. The local actor played the perfect muscle man Rocky Horror in the first American performances of the live show following the movie’s release. As such, Hawke’s 1978 Westbury Music Festival production was the first live show to have to deal with audience members talking back to them, as is de rigueur at movie screenings.

Though this is Hawke’s sixth “Rocky Horror” show, the Triangle production is his first serving as its director.

“It just keeps coming around,” Hawke says. “I enjoy the show a lot. It’s been great to have complete control [as director], being a control freak.”

This time around, Hawke says that he’s trying to subtly modernize the show at a time when cross-dresser is the preferred replacement for the term transvestite in some circles. The update has also included making Dr. Frank-N-Furter less of a drag persona and more androgynous.

“We’ve tried to make it more palatable for the 2019 world,” Hawke says.

They’re also looking to embrace the audience participation aspects of “Rocky Horror,” and will sell bags of items that are meant to be thrown during the show.

He adds that this version will definitely be more risqué than the Barksdale production two decades ago.

“You couldn’t do some of the things that we’re doing,” Hawke says. “We’re amping up the sexuality because of where it’s being done. It’s not X-rated, but it’s definitely for mature audiences.”

If you’re interested in tickets, get them fast: The two-week run is already nearly sold out. To accommodate more shows in such short time span, some dates will have both a 7 p.m. and 11 p.m. performances.

Madeleine Witmer, who plays Janet, says the cast has been open, comfortable and playful while putting the show together.

“I think we’re mostly nervous about how sweaty we’re going to be, because we’re dancing so much and moving so much,” says Witmer about the double performance evenings. “As long as we have time after the [first] show to dry off, take a break and have some food, we should be good.”

As for Morgan, “Rocky Horror” has a special place in his life for yet another reason; it’s how he met his spouse, Dan Stackhouse. During the 1998 run, Morgan’s now husband was on the show’s crew, and would make sure he was put together after a quick costume change near the end of the show.

“He used to check my teeth for lipstick,” Morgan says. “As we got to know each other that summer, that would be followed by a kiss.”

Getting back in the heels – an inch higher this time around – Morgan says tackling the role again is “fantastically fun.”

“It’s fun to be back in the role, to look at it from the lens of 21 years later. The excitement for me is watching a new generation … make of the show what’s special to them about it,” Morgan says. “In a world when gender and sexual identity is more fluid and open, it’s really fun to see how this attaches to [younger cast members] and makes meaning.”