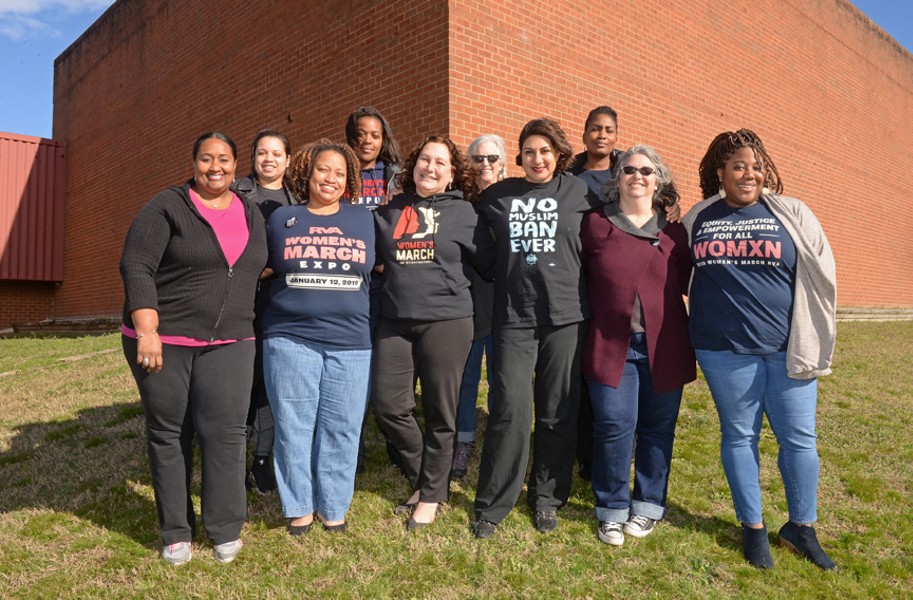 A group of women want to put the act back in activism.

Some were motivated to get involved as part of their role as community members, while others did it for the exposure and education gleaned from being with people different than themselves. All of them say they did it for the sisterhood.

In a distinction worth noting, the 2017 Women's March RVA was the first women's march in the country, clocking in a full week ahead of the national march that sparked a firestorm of local marches.

"I found myself a bus organizer that first year," says Monica Morris, one of the local group's organizers. "I hired two buses to take people to Washington free of charge. I was pissed."

Meeting other like-minded women helped Morris flip the switch from angry to motivated, and a group was formed: Women's March RVA. Members decided on a mission of encouraging a diverse collective of Richmond women to walk with purpose for equity, justice and the empowerment of all women.

Yet despite the best of intentions, after last year's march the group got some push back about not being inclusive enough, so it actively sought out more diverse participants. "We looked for people who were good with putting up with a large group of white women," Morris recalls.

Eager to encourage the people she refers to as keyboard warriors — those who rally support online but don't actively participate — Morris and her peers conceived of an expo to follow this year's march so that people could discover organizations worth supporting, learn about volunteering opportunities, hear speakers and create signs for the national march with assistance from the Peace Education Center.

"I've learned a lot being involved," Sked says. "I had no idea how much I didn't know, but this is a place where you can ask questions and someone with more experience will explain it to you. It's a safe space to talk and ask questions."

Sked and Morris are among 15 women who form the core of Women's March RVA, a collective that found each other from within the community, at work, at other protest events and through friends.

"The relationships built were formed from how activism and work overlap," explains Monica Hutchinson. "We met at events and there was a natural progression where relationships and bonds formed."

When Aljanette Hall, a mentor to teenage girls, saw Morris in a sash and button at the 2018 march, she didn't hesitate to walk up and introduce herself. The result was a lot of conversation and connection points.

"This is the first truly diverse group I've been part of," Hall says. "I'm starting to see things not just from the black woman's perspective. For instance, it opened my eyes to the struggles Muslims face. It's been very enlightening." The group continues to work on adding gender diversity to its ranks in an ongoing effort to be an ally to the LGBTQ community.

The Saturday march will begin at 9 a.m. at the Diamond and head down the Boulevard to Broad Street and back to the Arthur Ashe Center, where the expo kicks off at 10 a.m. There, people can meet representatives of local organizations supporting women, hear a series of speakers and peruse 30 local vendors. Also planned is a silent auction, as well as an area for creating signs for the Martin Luther King and Women's March D.C. events to be held the following weekend.

In an effort to make the expo even more inclusive, the group solicited song suggestions from the public so that a play list for the expo could be created that spoke to many cultures and genders. The route is accessible to all, dog and family-friendly, although pets aren't allowed in the Ashe Center afterward.

At last year's march, Gov. Ralph Northam donned a pink hat and led part of the march and it made national news. "We'd love to have Pam Northam and Anne Holton joining our march this year," Morris says hopefully.

"We're taking a piece of what we do and bringing it to a larger group," Hutchinson says of adding the expo into the mix. "We're marching for women who don't even realize they need to march."