The Testament of "Orphée" 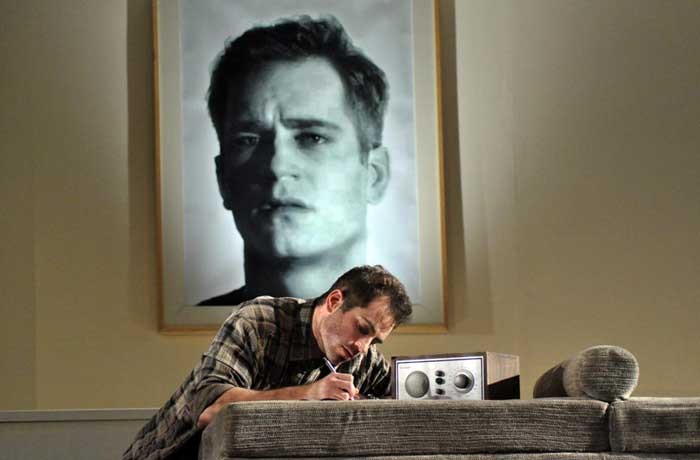 In Jean Cocteau's 1949 film version of the Orpheus myth, the poet Orphée grieves his wife Eurydice, saying, "I would follow her to hell!" Heurtebise, death's chauffeur, replies, "You needn't go that far."

Indeed, the underworld is no farther away than the depths of the psyche. In order to be reunited with Eurydice, Cocteau's hero must resolve — or have resolved for him — the troublesome matter of his love for another woman who is referred to as "his death," and who says she loved him even before they met.

The American composer Philip Glass wrote the opera "Orphée" in 1991, using the Cocteau script as libretto. This week Virginia Opera will present the work at the Carpenter Theatre under the direction of Sam Helfrich, who first directed it for New York's Glimmerglass Opera. Orphée is sung by baritone Matthew Worth, a University of Richmond graduate who sang the title role of Virginia Opera's "Don Giovanni" last year. Other cast members include Sara Jakubiak as Eurydice, soprano Heather Buck as La Princesse, and tenor Jeffery Lentz as Heurtebise. Steven Jarvi conducts the Virginia Symphony Orchestra.

While the film focuses on themes of art and death, this production emphasizes Orphée's marriage and his threatened career. "It's a common story of a midlife crisis," Helfrich says.

Orphée is torn between his love for Eurydice and the tantalizing La Princesse, who is complicit in Eurydice's death. Orphée travels to the princess' world and gets Eurydice, but unlike the Greek myth, they return home and live together without his looking at her. When the inevitable glance occurs, events are set in motion that lead to the climax in which the fate of the husband and wife is seemingly controlled by La Princesse.

Mirrors are portals between the two worlds, and the staging that accomplishes the impression of mirror travel is "fun and theatrical," Helfrich says. "The audience lurches forward and goes, 'What just happened?'"

The production deliberately leaves many points open to audience interpretation, including whether there are supernatural elements involved.

"You're going to leave with a lot of questions," Helfrich says. "There's always a lot of chatter after a show." Ultimately, he says, it's an engaging story that "presents the familiar and the mysterious in the right combination."

Musically, it isn't Mozart — although Glass quotes Gluck's 18th-century opera "Orfeo ed Euridice" at least once — but neither is it stereotypically Glass. For a composer whose name is nearly synonymous with minimalism, "Orphée" contains a surprising variety of music.

When Orphée can't look at Eurydice, for instance, the story takes a turn toward French farce, and Glass's music reflects that humor, Helfrich says. "Glass is a genius at creating moods. You're drawn forward into the situation."

Virginia Opera has presented operas that were younger than 20 years old at the time of production, but it isn't a common occurrence, particularly in recent years. With news that the 2011-'12 season will include the 1995 opera "A Streetcar Named Desire," it could be that the company is exploring the right combination of old and new.

This article has been corrected from the print edition.