In name of effective government, the mayor took his time stocking City Hall with the best people. So why does it seem so inefficient? 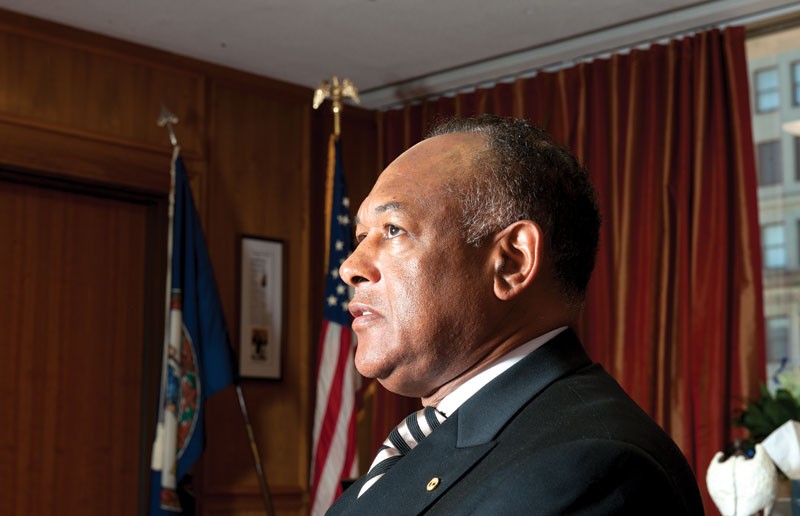 In Mayor Dwight Jones’ push to procure a tier-one city, two recent projects — one a relatively small marketing contract and the other one of the largest public works projects in city history — suggest a growing gap between perception and reality.

In the last two weeks the decision to award a $100,000 branding and creative services contract to an agency based in Denver seemed to some like a slap in the face to the local advertising and marketing industry — which many, including Jones, have touted as one of Richmond’s greatest assets.

When it came to the $116.5 million jail contract, approved by City Council in late July, the city also hired contractors outside of the city — Tompkins Builders of Washington and Virginia Beach-based S.B. Ballard Construction Co. That project has been dogged by questions about the city’s procurement process, minority participation and location of the jail.

But the two projects share a common thread: Both suggest that the Jones’ administration is nowhere near as efficient and effective as advertised. Since taking office two and a half years ago, Jones has preached the virtues of efficient government, bringing in the right people to run the city after four years of dysfunction under former Mayor Doug Wilder.

“I recognized that there needed to be a change of culture. And in order to have a change of culture, there could not be any quick fixes,” Jones said in an interview with Style Weekly in February. “And so we needed to be very intentional about getting experts in to run the city of Richmond. And that’s why we had to be deliberate in terms of taking the necessary time to get the right people to do the right jobs.”

Building Richmond into a tier-one city requires thoughtful planning and less grandstanding, Jones is fond of saying. That’s why it took him nearly a year to hire his chief administrative officer, Byron Marshall, and nearly two years to hire an economic development director. Jones had to clean up what Wilder left behind — and he wouldn’t be rushed.

“I’ve got to set this house in order,” Jones said in February. “And that’s what we are doing.”

But the house seemed anything but in order during the last two weeks. While the advertising contract caused a public stir, driven by one of the losing local bidders, the city’s handling of the jail contract is far more troubling.

In the week following council’s approval of Tompkins and Ballard to build the jail, the city met with state corrections officials to discuss how to handle an embarrassing slip: Despite assurances that the city had attained state approval for the new jail — in order to receive state funding for as much as 25 percent of the $116.5 million project — the city didn’t have it. Because the scope of the project has changed since it first received approval from the Virginia Corrections Board in October 2009, the city must resubmit the jail plans.

The mistake could be costly. While it appears that the state likely will approve the new proposal — “We would certainly work in any way to avoid pitfalls,” says Larry Traylor, a spokesman for the state Corrections Department — the new proposal is for a smaller jail than what was initially approved. This may result in the reduction of 35 staffing positions at the jail because state funding is based on the number of beds.

What’s more, it may hold up the city’s ability to issue a notice to proceed to Tompkins/Ballard. As of last week the city had yet to do so. In the days leading up to City Council’s approval of the project, Jones repeatedly pressed for action, citing the need to have an agreement in place before mid-September, when prices for construction materials could increase, costing city taxpayers even more.

There were multiple problems with the city’s handling of the jail contract, including the minority participation questions and issues regarding the height of the jail. But not having the state funding for the project locked up was perhaps the most glaring mishap — one that likely could have been easily avoided.

“Let’s be honest, this is not the only thing that needs to be done in the city. We have limited resources,” says Councilman Bruce Tyler, who’s been critical of the city’s handling of the jail contract, and voted against approving Tompkins/Ballard last month. “If we do not get [state] funding, it will put us behind. … Not receiving this 25 percent would put an additional tax burden on the citizens.”

If this is the work of the experts Jones spent so much time bringing to City Hall, it might be difficult for some to buy the mayor’s argument in The Richmond Times-Dispatch that the real problem was state government. Jones wrote an editorial Aug. 14 defending the $100,000 website contract, not the $116.5 million jail contract.

“State law does not allow a locality to award ‘bonus points’ to local firms,” Jones writes in his commentary. “This is a limitation that significantly reduces our flexibility in the contracting process and sometimes hurts local businesses and vendors.” His spokeswoman told Style in an earlier story that he was considering supporting an effort to change the law.

On the same day Jones’ editorial appeared, Times-Dispatch publisher Thomas Silvestri took aim at the critics of the Denver contract in a commentary titled, “The best in town vs. the best anywhere.”

“A city aspiring to be top tier can get there by employing outstanding talent. So, the principle of ‘Hire the Best,’ no matter where they’re based, makes sense,” Silvestri writes. “Besides, when the goal is progress, an improved Richmond is a success in which many can share. Progress cures a lot of ills.”

Of course, his presumption is that the people doing the hiring are capable of identifying who is the best.