The Story Behind One of Richmond’s Own Islamic-Inspired Buildings 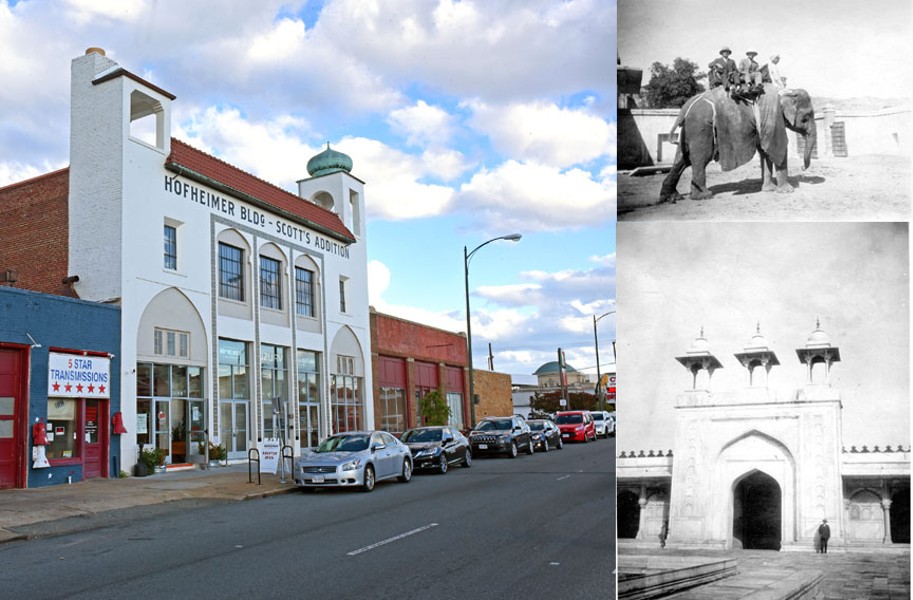 The Hofheimer Building at 2816 W. Broad St. was designed in 1928 by Harold Calisch. Among his inspirations was the Pearl Mosque , above, in Agra, India, that he and his father saw on a world tour on which they also rode an elephant.

Islamic-inspired buildings are few and far between hereabouts. But something was definitely afoot in the late 1920s: Of course, the Altria Theater, which opened in 1927 as the Mosque, is beloved, was recently restored and is glorious.

But a long-neglected and rare structure from the jazz age — with the aesthetic influence of the Middle East — has been repurposed as a Peter Chang restaurant and an event venue with a popular rooftop bar, the Hofheimer. The building at 2816 W. Broad St. was completed in April 1929 to house the H. R. Hofheimer Rug Cleaning and Storage Co. Contemporary accounts cited its "details from the famous Taj Mahal of India and the Mosque of Omar in Jerusalem." After examining its stucco walls, onion dome, tile roof and ogival arches, an observer might dismiss the building as an exotic fantasy.

But its Richmond-born architect was highly educated and well-traveled. Richmonder Harold Calisch graduated from John Marshall High School in 1915 and then completed architectural studies at the University of Pennsylvania. Returning to Richmond, he went to work for the well-established firm of Carneal & Johnston. When the United States entered World War I, Calisch was dispatched to France where he designed roads.

Some years later, in 1925-26, he accompanied his distinguished father, Edward N. Calisch (rabbi of Congregation Beth Ahabah from 1891-1946) on a round-the-world tour. They sailed from San Francisco in November. Father and son visited China, Japan, the Philippines, Palestine and France before returning to Richmond.

It was at Agra, India, that the two men toured the Taj Mahal and other Islamic sites. These buildings would inspire Harold four years later when, in 1929, he tackled the architectural commission for the Hofheimer building. Harold was also an amateur photographer: An album with pictures from his grand tour is now in the collection of the Beth Ahabah Museum and Archives, a repository of Virginia Judaica.

Harold Calisch (1893-1981) photographed his father in 1926 standing in front of the Pearl Mosque in Agra, India. And the two travelers were captured atop an elephant in Amber, India. Wrote Harold: "It is too bad this photo cannot show the expression on our faces as the elephant rises from his knees."