Long treated by police as unpreventable, domestic violence is receiving renewed attention in the wake of some high-profile cases. But will new tactics work? 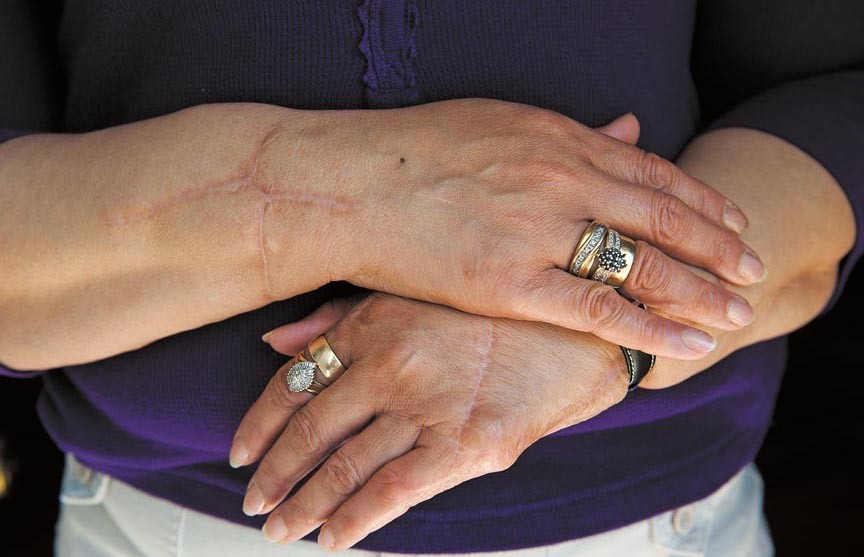 They found her in a Wal-Mart parking lot, her dress torn, with bruises on her neck. It's just before dusk May 6, during what was previously an uneventful shift, when the call comes across the police radio. Henrico County police officer Karen Furgurson turns down the country music whispering out of the stereo speakers and picks up the receiver. She makes a quick mobile-to-mobile phone call to another cop patrolling the area to coordinate a response.

Furgurson, a diminutive, red-haired mother of three, graduated from the police academy in March 2010. She's been working as "road cop"— police parlance for uniformed patrol officer — just long enough to no longer be considered a rookie. Winding through a west Henrico neighborhood, she checks the details of the incident while they appear on the screen of her laptop, which is mounted to the dash of her cruiser. The call has come through tentatively as a "domestic," and she'll take the lead.

Major crime is down in Henrico — aggravated assault, motor vehicle theft, burglary and the like — and has been declining during the last 20 years. Violent crime and homicides in Richmond region, long tagged as one of the most violent cities in the country, have been declining significantly in the last decade. New approaches in community policing and computerized data mining have enabled police to track and target high-crime areas and tactically distribute resources more effectively.

But domestic violence continues to flummox police departments locally — and across the state. Traditionally police have largely taken a hands-off approach when it comes to 911 calls for domestic incidents, writing them off as unpreventable crimes of passion. In the last few years, however, many police departments such as Henrico's had an epiphany: Perhaps there is a tactical approach to handling domestics?

The approach requires officers to become part law-enforcement officers, part social workers. The real effort starts on the front end, with patrol officers such as Furgurson.

During her May 6 shift, a 911 call comes from a nearby Wal-Mart. The caller is a young woman, a mother of two. The woman tells the dispatcher that she fled her nearby apartment after an argument with her husband turned violent.

When Furgurson arrives she pulls her white police sedan into the parking lot behind a second squad car. Two other patrol officers are here, but they've waited, along with the alleged victim, who sits in a police cruiser, for Furgurson to begin the interview. After discussing the call with them briefly, she ambles over to the passenger side of the car and introduces herself to the olive-skinned woman slunk into the front seat.

Through tears, the woman gives her account of the past few hours. She's a graduate student at a local university. Her dress, black with gold trim, is ripped at the shoulder. On her neck is a series of jagged purple streaks that disappear behind her thick, shoulder-length hair.

She spent the afternoon ensconced in her bedroom, trying to choose the "most appropriate" dress to wear to a school-related reception later that evening. She settled on a black dress with the modestly immodest neckline. But her husband wasn't pleased with the choice. With Furgurson taking notes, the woman alleges that in the ensuing argument, her husband attempted to force her to change into something less revealing. When she refused, he allegedly prevented her from leaving, restraining her with his hands.

After she finishes answering questions, the officers move away from the crowded entrance toward the back of the lot. Furgurson dips into the car trunk for a camera to get photo evidence of the still-fresh bruises on the woman's neck. Thirty minutes later, Furgurson and two other patrolmen are at the front steps of the apartment she shares with her husband and two children.

The woman's husband allows Furgurson and the others to enter, apologizing for the clutter while he leads them past the two kids eating noodles on the family couch and into a dim kitchen. Established protocol for Henrico police responding to a domestic dispute is to separate the parties involved, away from any children who might have witnessed an alleged incident. So while a third officer distracts the couple's twins with questions about school, the husband, a graying Egyptian expatriate with a pair of round glasses perched on the tip of his nose, gives his version of the story.

The sum of the dispute was that the dress was not as conservative as he would have liked. They are a family of Muslims, he informs. When they first arrived in the United States in 2005, his wife had worn a hijab, a head wrap traditionally worn by Islam's female adherents, whenever she was in public. But no longer. "She knows that this is not appropriate for us," he says. "She's disrespecting our culture." So he says he insisted that she change her clothes. She didn't. And it's at that point where his account diverges from his wife's.

Furgurson asks the man if did as she accused: choke her after she refused to change dresses. He denies it. But the officers have enough evidence to take action. Minutes later, the young woman's husband is placed in handcuffs and arrested on suspicion of domestic assault.

Each domestic case presents a different mystery that needs unraveling, Furgurson says later. Was there a predominant aggressor? Were children present? Is there evidence that conflicts with the alleged victim's version of events? The questions are part of a continuum, based on state and local laws, that allows officers to assess a domestic violence incident. And they're critical to getting the answers that can lead to an arrest and successful prosecution, and possibly prevent repeated, more violent incidents — even murder.

Historically, domestic violence has been the family secret, largely tolerated and accepted. Cultural forces such as the women's rights movement in the 1960s began to bring more awareness to the problem. But progress was slow. Only in the last 25 years did federal, state and local laws begin cropping up to better protect victims of domestic violence and abuse. Slowly, police departments across the country devoted more resources to domestic cases, developing new strategies to ensure that those laws were enforced and victims were not "re-victimized," Henrico police Sgt. Shawn Maxwell says.