The Squaring of Grace

Architecture Review: A new high-rise and the 912 Building lift an area of town overdue for attention. 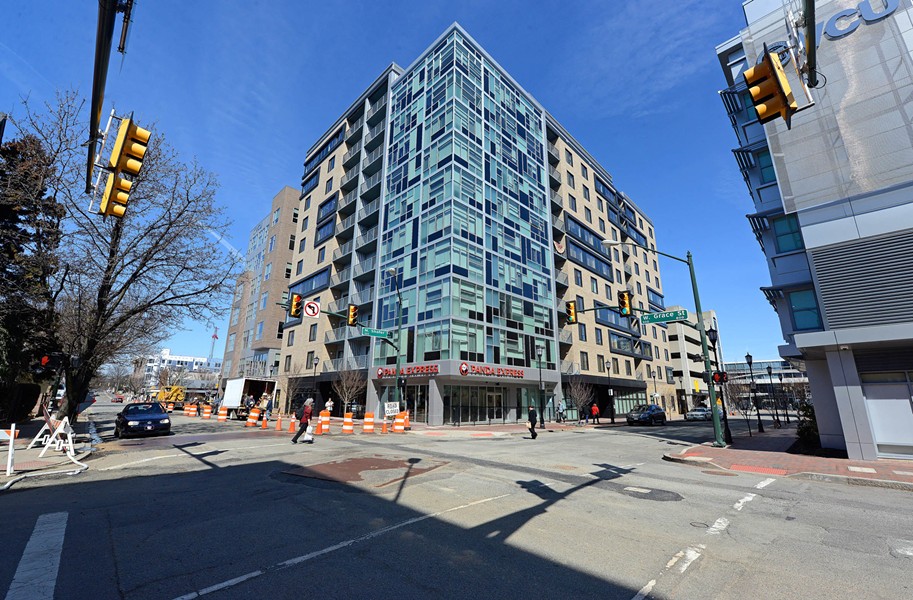 Scott Elmquist The Square apartment complex at West Grace and Shafer, by Walter Parks Architects, embraces the present with its distinctive glass walls.

It’s only a block north of the city’s oldest high-rise residence, the Chesterfield (1902), a venerable pile that’s at Franklin and Shafer. And while both buildings house primarily Virginia Commonwealth University students, the 113 years separating the construction of these buildings have brought some differences.

At the Square, in addition to a roof deck, underground parking and a popular Panda Express restaurant on street level, the building’s unabashed modernism makes it a welcome 21st-century addition to the long-tattered 900 block of West Grace. This stretch was overdue for attention.

The 11-story, 150-unit, 154,000-square-foot complex is stylish architecturally. But it also offers some textbook lessons on how to reconnect disparate elements of a fractured neighborhood without being architecturally obsequious.

Designed by Walter Parks Architects, the Square faces its two street fronts — Grace and Shafer — with equal verve and similar massing. The Shafer Street façade is broader, projecting three bays connected by balconies, while the Grace Street has two bays.

The section at the corner is the most dynamic visually. Beginning at the second floor and continuing to the flat roofline, the outer walls of this block are composed of glass squares and rectangles pieced together like a cubist work by Piet Mondrian. But rather than using primary colors, the architect includes the more subtle shades of pale blue, gray and black, plus clear glass. And while this section conjures Mondrian, it also channels the distinctive glass walls of a contemporary gem of an apartment building along New York’s High Line, which was designed by French architect Jean Nouvel.

This elegant corner glass tower may be the showiest element of the Square, but it isn’t necessarily the most important. As the building extends north toward Broad and west toward Harrison, the exterior walls beyond this glass partition are clad in oversized, tan-colored brick. These masonry walls provide a gradual transition between the Square and the two adjacent buildings.

On the north side is the brutalistic, concrete and red brick VCU parking deck, with a Barnes & Noble on the ground level. To the west is a just-completed high-rise for VCU, the 912 Building, also from the Walter Parks shop. This 79,000-square-foot, six-story structure contains classrooms and faculty and administrative offices. A yet-to-open 5,000-square-foot Wal-Mart will be on the first floor. Designed as a companion to the Square, the massing, masonry treatment and fenestration of the 912 Building is similar to its neighbor.

The architect could have placed a less complex and more monolithic structure on this visually important site, which is situated along the heavily traveled pedestrian axis linking the university’s James Branch Cabell Library and the sprawling fine arts building on Broad Street. But the massing of the Square and 912 Building are broken up into sections that reflect the traditional property width and rhythm of the street — a gesture to the scale of a half-dozen or so late-19th-century townhouses along Grace and Shafer and the mostly one-story retail operations along Grace. These distinct sections are separated, and linked, by balconies that create vertical recesses into the building’s street fronts.

In addition to getting the massing right, there are additional sweet touches. The front entrance to the Square is from Shafer Street, which elevates this street as a major pedestrian thoroughfare. And on the westernmost side of the 912 Building, its height is tamped down to the diminutive 19th-century townhouse next door with a well-articulated return, or linking wall. The university sprung for unifying new brick sidewalks along the Square despite its being a privately owned development.

The 900 block of West Grace and its environs have a storied if not checkered past. Some old-timers may recall the People’s and Chelf’s drugstores, the Lee Art Theater (for its adult films) and the watering holes Eton’s and the Jade Elephant. These two new companion buildings at Grace and Shafter are visually lively and don’t erase the pulse of the past, but embrace the present with dignity befitting a college campus community. S