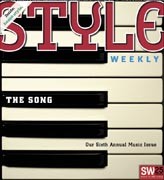 Of all the things made by the human race, the farthest from home is the Voyager Spacecraft, which reached the edge of our solar system last year. Launched in 1977, it carries the Golden Record, a kind of time capsule that contains images of life on earth, greetings in 55 languages, the sound of thunder — and music.

Should some distant intelligent life encounter the spacecraft, they'll be treated to strains from Beethoven's Fifth, a Pygmy initiation song, and "Dark Was the Night, Cold Was the Ground," the wordless moan by Blind Willie Johnson. Those songs serve as our message to the universe.

Closer to home, Style wondered what the locals were sending into the universe, how they were the breaking the hearts of the stars.

We wondered where the stories come from, and why. How some musicians interpret the words of others, and whether singers can sing about sex without blushing. How MCs invent a song in the heat of the moment. And that one song that makes you famous — or the one you can never live down.

Last week, scientists discovered a new planet way out there, one that might be hospitable to life. For the musicians in the following pages, a good song could someday introduce the human race. — B.R.

What Happens on Stage, Stays on Stage. by Hilary Langford

The Word in Words. by Amy Biegelsen

On the Set List of Giants. by Brent Baldwin

The Instant Song. by Amy Biegelsen

That One by Those Guys. by Carrie Culpepper