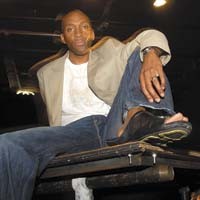 Richmond first felt the cultural impact of d.l. Hopkins in 2000 with his appearance in Slice soft-drink ads, famously receiving a key to the city from then-Mayor Tim Kaine. But his more lasting influence has been as one of the founders of the local spoken-word movement.

Like a poetic Johnny Appleseed, Hopkins seems to leave verse springing up in his wake. He's taught and promoted poetry through years of work with Art 180 and James River Writers, but his establishment of the Just Poetry Slam took spoken word to a new level locally.

Starting with small gatherings in summer 2004, the competitive Slam quickly grew into a major draw for local writers and by fall had moved to the Firehouse Theatre to accommodate the crowds.

Since then, local participation in poetry events has risen dramatically, with the first-ever Richmond slam team traveling to the 2006 national competition and a local student placing second in the statewide "Poetry Out Loud" competition.

An accomplished stage actor, Hopkins recently completed a stint as artist-in-residence at the University of Richmond and will appear in an episode of "The Wire" on HBO. He says his focus always has been on inspiring young people, and he'll be working to revamp the Just Poetry Slam to draw more high-school and college-age participants.

He's also working to help change the image of the spoken-word movement. "People think poetry is a bunch of angry people getting together to shake their fists," he says. "People come to the slams and see that it's just … people expressing themselves."