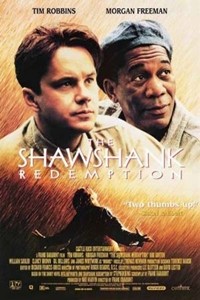 In 1946, a banker named Andy Dufresne (Tim Robbins) is convicted of a double murder, even though he stubbornly proclaims his innocence. He's sentenced to a life term at the Shawshank State Prison in Maine, where another lifer, Ellis Red Redding (Morgan Freeman), picks him as the new recruit most likely to crack under the pressure. The ugly realities of prison life are quickly introduced to Andy: a corrupt warden (Bob Gunton), sadistic guards led by Capt. Byron Hadley (Clancy Brown), and inmates who are little better than animals, willing to use rape or beatings to insure their dominance. But Andy does not crack: he has the hope of the truly innocent, which (together with his smarts) allow him to prevail behind bars. He uses his banking skills to win favor with the warden and the guards, doing the books for Norton's illegal business schemes and keeping an eye on the investments of most of the prison staff. In exchange, he is able to improve the prison library and bring some dignity and respect back to many of the inmates, including Red. Based on a story by Stephen King, The Shawshank Redemption was the directorial debut of screenwriter Frank Darabont.~ Mark Deming, All Movie Guide

Sorry there are no upcoming showtimes for The Shawshank Redemption