The Shape of Things to Come

A legendary artist's work is restored at the Virginia Museum of Fine Arts. 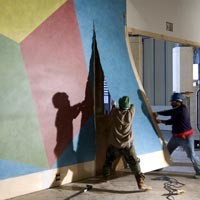 After three weeks of painstakingly detailed work by local artists, the father of conceptual art once again has a prominent place inside the Virginia Museum of Fine Arts.
“Wall Drawing #541” by Sol LeWitt, a giant of post-World War II art, was originally purchased by the museum in 1999 and installed a year later around the entrance to the Sydney and Frances Lewis Galleries of Modern and Contemporary Art. Architecturally scaled, the work's large, color-rich cubes appear flat, unlike a typical illusionist mural. Last year, however, the plywood walls were discovered to be rotting and the entire section was demolished, a small part of the $150 million expansion ongoing at the museum.

“The work is actually made to be taken down and put back up,” says John Ravenal, the museum's curator for modern and contemporary art. “One of the innovations of LeWitt's work is there is no unique and precious object, what you're buying is basically the idea. … He was looking for a more objective way to make art.”

LeWitt died last year, but not before he had trained a number of people how to install his work. One of those students, Sarah Heinemann, 31, is now employed by LeWitt's studio and was contracted by the museum to lead a team of six former Virginia Commonwealth University students through the reinstallation. For much of the time, the draftspeople used soft cotton rags to apply a specified number of coats of acrylic wash, with the whole process open to the public. They finished at the end of the first week in February and the entire section began receiving a coat of varnish.

“It's complicated since Sol's passing because there are so many decisions that he used to make,” says Heinemann, who began working for LeWitt in her early 20s. “The metaphor used a lot is that he was a composer, handing the score to the orchestra. I think he liked that play, but there was also very strict set of rules that had to be followed.”

Heinemann should know. She has now installed around 40 of LeWitt's works, requiring her to travel extensively with her 3-year-old. She explains that LeWitt himself came to Richmond after the original installation and made several aesthetic changes that caused the reinstallation to be trickier than usual.

“The most challenging thing has been trying to piece together all of the notes, editing, handwriting, faxes that Sol did,” Heinemann says.

Anna Bushman, a VCU painting and printmaking graduate, was recommended the job by one of her professors. Intrigued by the fact that LeWitt never implemented his own work, Bushman says the experience was interesting partly because it allowed her to set aside her own artistic process to build someone else's piece.

“Working with a large crew and being able to move around and work as a team, you get a uniform project,” she says. “The idea being that none of us want to exert any individuality in the piece.”

When asked what she remembers most about her famous mentor, Heinemann recalls a typical story about a New York opening where LeWitt kept to himself, ignoring several major art collectors and wandering the museum alone.

“He was an old school kind of artist. Very quiet, really funny, very humble,” she says. “The kind of artist that didn't go to his own openings.” S