"The Dark Knight" steps out of the gloom and into a confusing story. 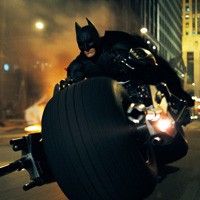 As envisioned by director Christopher Nolan and actor Christian Bale, Batman disguises himself not just with a mask but also a husky growl of a voice. It seems part of that vision of the character as a normal human trying hard to become something extraordinary, and it works fine as long as Batman is in the shadows one minute and gone the next. But go conversation length, as the sequel does too often, and you start wondering when someone will offer Batman a lozenge.

"The Dark Knight" is highly anticipated in part because of the untimely death of actor Heath Ledger, who appears as a Joker even more reimagined than Bale's Batman. But also because the previous film in the franchise (and the first directed by Nolan), "Batman Begins,?VbCrLf was so imaginatively rendered, dedicated to creating a believable Batman and outdoing expectations in the process. This film intends to keep Batman a regular guy with special training and equipment, but it's also enhanced in antithetical ways -- guilty of sequel crimes (like an unnecessary trip to exotic Hong Kong) and mired in a half-baked, confusing story. This time, despite an amazing turn by Ledger, the franchise is destined to disappoint the hype.

The movie starts near the end of the previous film, with Wayne Manor burned to the ground and Bruce Wayne/Batman living in a lofty penthouse. Writers Nolan and his brother Jonathan have typed themselves into a corner, because they've written out many of the details that made the first movie interesting. Wait in vain for a trip to the Bat Cave, or a shot of Wayne Manor standing like a lighthouse in the drizzle, or a glimpse of Batman's development as a character. The new movie opens with an obligatory crime-fighting sequence that could have been found in any of the 1990s versions, and then sets about trying to juggle Batman's battle over Gotham with the Joker and his attempt to help a brave new district attorney (Aaron Eckhart) rid the city of organized crime.ÿ

Organized crime is by now a dull device for an action movie, but "Batman Begins?VbCrLf somehow invigorates it with fresh menace -- probably because, like Batman, for most of the movie it remains hidden. In "The Dark Knight?VbCrLf the criminal element gathers together in well-lit meeting rooms like a gangster United Nations, a cooperative of Italian goombahs, chain-wearing gangbangers and Asian kingpins sitting down at a table debating how to keep Batman from impounding their money. You can't take it seriously, but the mob this time is just a device to introduce the Joker, who arrives in time to save them from Batman. He offers to get rid of their nemesis for payment -- then burns his money. To show he's dangerously crazy? Or crazily dangerous? Who can say?ÿ

"You complete me,?VbCrLf the Joker tells Batman at one point, but it's more the other way around. Ledger's performance saves the film even though it's ultimately impossible to make sense of his character. Like Batman, he was once a normal guy, but now he wields knives and tongues his lips like an abused lizard, as if he means to lick away those scars that cut a crazed smile up his makeup-smeared cheekbones. He's a compelling figure (which may be why he's been granted two incarnations in the franchise, Ledger's version and Jack Nicholson's, way back in the 1989 original), but not one that ultimately makes a lot of sense. The Joker and his anarchic behavior invite serious discussion from the rest of the characters, but a serious look at him invites uncomfortable questions. If he's only interested in creating chaos, why take such a roundabout way to get there? If he's an anarchist, why does he need to make a fashion statement?ÿ

"Batman Begins?VbCrLf was no less a summer popcorn movie, with incredulous plot developments and drippy dialogue, but it was also charged with new ideas and imagery that fit well together all the way to a crackling ending. "The Dark Knight,?VbCrLf by comparison, groans to a close with at least two epilogues too many. After all that, we can't tell whether it's setting up the next movie or explaining why we're never going to hear from Batman again. You have to suppose there are more sequels planned, but Ledger, the bright young star who keeps you interested in this one, is gone, and the rest of it seems to have already run out of ideas. (PG-13) 142 min.ÿ