The “Secret Art” of Dr. Seuss brings a horde of hats to Midlothian. 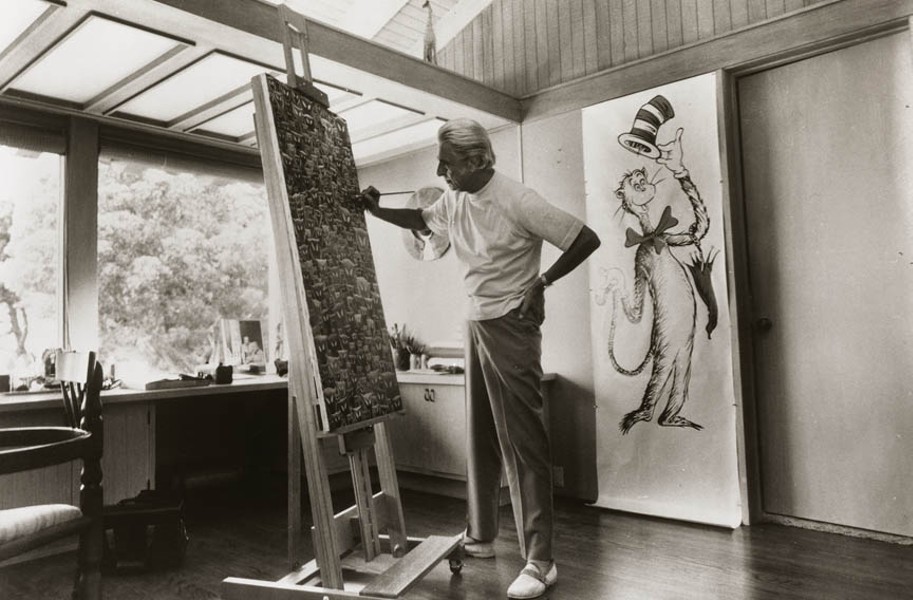 Artist Theodor Seuss “Ted” Geisel, otherwise known as Dr. Seuss, works on a painting while arguably his greatest creation, the Cat in the Hat, looks on. You may not know it, but Geisel had a thing for eccentric hats, and his stash is coming to Midlothian.

When someone mentions the secret side of an artist these days, images of strange fetishes or illegitimate children may come to mind. But with Dr. Seuss, the creator of arguably the world's most popular children's books, the secrets in his closet are hats and surreal sculptures. Thanks to a Richmond-area native, a local gallery will premiere the latest of these formerly-hidden gems as part of two traveling exhibits.

"People love the idea of lost treasure and that's what these artworks represent," says Bill Dreyer, director and curator of the "Art of Dr. Seuss" collection. Dreyer will open the "Hats Off to Dr. Seuss" and "Secret Art" exhibits at Bella Arte gallery in Midlothian this weekend. These exhibits premiered at the New York Public Library and are touring 16 cities nationwide. But they'll have a new addition when they hit Richmond.

The author and artist behind Dr. Seuss, Theodor Seuss "Ted" Geisel, created fantastical worlds in his many books. But unbeknownst to his many fans, he was an accomplished visual artist who expanded into sculpture early in his career. These works are ensconced in his La Jolla, Calif., estate and rarely seen by anyone besides Geisel's wife, Audrey. In his will, he urged his wife to make these works public and so, for the past 14 years, the "Art of Dr. Seuss" collection has been making limited edition reproductions of the originals available for sale.

Generating the most excitement of these have been Geisel's "Unorthodox Taxidermy" sculptures. The artist used actual beaks, horns and antlers he received from his father who was superintendent at a zoo to construct strange animals that rival anything Geisel created in two dimensions. When the "Secret Art" exhibit reaches Richmond, for the first time it will include the last of these 17 sculptures, the 3-foot-tall mounted head of the Sea-Going Dilemma Fish.

"It's a little sad because unveiling this last sculpture represents the end of an era," says Dreyer. "But there seems to be no end to the riches in the Seuss collection."

The "Hats Off" exhibit represents another example of these riches. Since his adolescence, Geisel had an insatiable curiosity for hats, a fascination that was clear in his second book, "The 500 Hats of Bartholomew Cubbins." Hats of course defined some of his most iconic characters, a certain mischievous cat.

But Dreyer was still surprised when Audrey approached him one day while he was doing research at the Geisel estate and asked him, "Do you want to see the hat closet?" "It was like something out of James Bond," Dreyer recalls. "She took me into a library that is all floor-to-ceiling bookshelves. She went to the last bookshelf and opened the whole wall like a door. Behind it was a secret room filled with hundreds of hats."

Several of the fragile fabric creations were falling apart but Dreyer was able to preserve 158 of them and selected 26 for the "Hats Off" exhibit. "Each of the hats has a direct connection to one of Dr. Seuss's books or to one of Ted's paintings," he explains.

Dreyer is particularly excited to be bringing this exhibit to his home town. A Midlothian High School graduate, Dreyer attended Virginia Tech for a year before taking his interest in art to the West Coast. He worked as an art agent and publisher for 10 years before he was recruited for his current job by Chicago's Chase Art Cos. "Audrey Geisel has taken the preservation of Ted's legacy seriously and it has been our job to reveal to the world just what a talented and inventive artist he really was," Dreyer says.

Apparently, Audrey Geisel has also been fond of revealing fascinating tidbits from the Dr. Seuss legacy to Dreyer in dribs and drabs. In addition to the hidden closet incident, he remembers that one of the first times he met her, she ushered him to her garage. She pointed out a gleaming silver 1986 Cadillac Seville and walked him around to see the license plate: "GRINCH."

Shortly after his collection started issuing reproductions, Dreyer says he was contacted by Rena Clump at Bella Arte, who has sold limited edition Dr. Seuss reproductions ever since. "In some ways, this touring exhibit is a thank-you to the galleries around the country who have helped us in promoting Ted's work," Dreyer says.

"The reaction people have when they visit these exhibits is almost always the same as the one I had when I first saw Ted's personal collection," Dreyer says. "First they say 'I had no idea' and then, 'This is so cool!'" S

The "Hats off to Dr. Seuss" and "Secret Art" exhibits will run at Bella Arte gallery from March 16 to March 30. Curator Bill Dreyer will deliver a talk at 7 p.m. during the March 15 opening, which runs from 4-9 p.m. Details at bellaarte.com or by calling 794-1511.