Every week we score the spirit of Richmond. Now for our annual rating of the city zeitgeist. 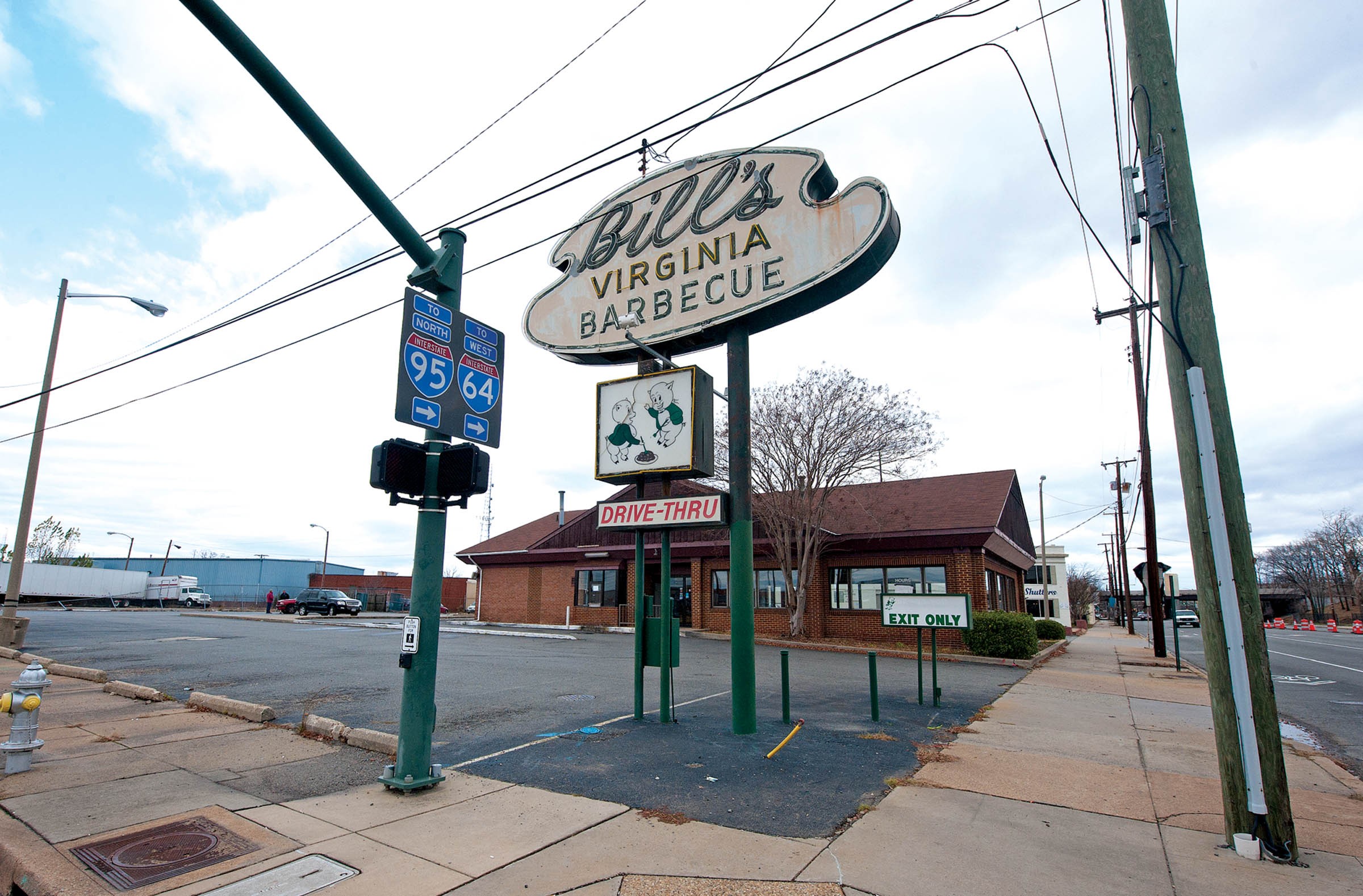 When Bill's Barbecue closed in September after an 82-year run, Richmonders responded with respectful, nostalgia-inspired laments. People shared fond memories of eating pork sandwiches with grandpa and making miles-long detours just to pick up a limeade or chocolate pie.

All pretense of polite mourning is cast aside a month later when the restaurant's president blames the chain's closure on President Barack Obama in a campaign ad produced by the Mitt Romney campaign. The three-minute spot ends with a chilling warning: "Bill's Barbecue couldn't take four years under President Obama. Can we afford four more?"

Residents of all political stripes are quick to note that perhaps it was the service, food and an outdated business model that had more to do with the chain's demise than the president of the United States. And then there's the pesky fact that Buz and Ned's Real Barbecue is thriving and even expanding just a stones throw from one of Bill's locations.

The final verdict? Perhaps some sauce just has an expiration date.

Havoc moves to a new conference. +3

After coming within a bucket of advancing to the Sweet 16 in the NCAA tournament in March, Virginia Commonwealth University jumps to a new conference — the Atlantic 10 — primarily to give the men's basketball team a higher profile. Coach Shaka Smart buys a house in the Fan and begins asserting his influence. He even plays host to a rally for President Obama at the Siegel Center in early May.

All around, it's a good year for basketball in Richmond. In the new, still-young season, the University of Richmond comes out strong (it already plays in the A-10) and jumps out to a 9-2 record before slamming into Kansas on Dec. 18, losing by 28. VCU struggles a little early but then starts cranking up. On the same night the Spiders lose to Kansas, then ranked No. 9 in the country, the Rams beat Western Kentucky by 32 points, improving their record to 8-3.

... And Richmond loses the CAA tournament. -3

The Richmond Coliseum may be old and dungeonlike, but serving as host to the Colonial Athletic Association men's basketball tournament in March is one of the few bright spots. With VCU in the A-10, the CAA announces in December that it's packing up and moving the tournament to Baltimore in 2014.

That means no home-court advantage for the Rams. This season's A-10 tournament is in Brooklyn at the spanking new Barclays Center. Losing the CAA tournament also means the city is losing one of the few sporting events that generates economic impact, although not nearly as much as civic boosters and the mayor's office claim. (In attempt to drum up support for a new Coliseum, the mayor once claimed the tournament kicked back $6 million to the city, but it's more like $1.7 million).

Once again, the mayor's incredible foresight to not go forward with the new Coliseum construction plan pays off.

We fantasize that we're a bike town. -4

Excitement starts to build over a giant bike race coming to Richmond in 2015 — thousands of visitors spending millions of dollars! — and then reality hits. First comes the devastation of losing Lanie Kruszewski, a 24-year-old who is killed riding her bicycle to a friend's house in the Museum District after getting off from work.

The vivacious graduate of Maggie Walker Governor's School and James Madison University was struck and killed by an SUV driven by Elias Steven Webb, 30, a newspaper advertising salesman later charged with felony hit and run.

Her tragic death serves to highlight how Richmond lags in terms of bike infrastructure and safety. There's a general disregard and lack of understanding when it comes to motorists coexisting with cyclists.

No, Richmond isn't some romantic European city where everyone bikes to work and understands how to navigate traffic circles. We like our big trucks and cars too much. This helps explain why Henrico County's board of supervisors thumb its nose at Mayor Dwight Jones — who tools around in a giant black SUV — when he comes asking for help to stage the UCI Road World Championships in 2015.

But in the wake of Kruszewski's death, there finally is some talk of making roads safer for cyclists.

A former track standout at James River High School, Chesterfield native Kellie Wells overcomes not only personal obstacles, but also clears the ones in her way at the Summer Games in London, where the Olympian earns a bronze medal in the 100-meter women's hurdles.

A subsidiary of Warren Buffett's Berkshire Hathaway puts its money where others fear to tread: print media. Faced with staggering debt, Richmond's Media General sells 63 of its newspapers to the investment company for $142 million and other assets, saving the 150-year-old Richmond Times-Dispatch and giving hope to employees. It's not that print is dead, it just matters more than ever what you put on those pages.

When the controversial ultrasound bill drums up public criticism for being "state-sponsored rape," not to mention laughs on "The Daily Show" and "Saturday Night Live," Gov. Bob McDonnell supports a compromise by signing a revised bill that gives women the miniscule choice of undergoing either a transvaginal or an abdominal ultrasound before having an abortion. If problems still arise, state legislators will be placed in the operation room to flip a quarter and ensure that women will never be bothered with making their own medical choices ever again.

After granting a permit to allow 31 murals painted by fifth- and sixth-graders on Monument Avenue, city officials tell Art 180's Marlene Paul to take down the exhibit, called "What Do You Stand For?" in late March. It isn't clear why — something about damaging the grass and conflict with the Easter on Parade and permit miscommunication.

But in April other public-art projects bloom, including murals springing forth on buildings for the G40 Art Summit and the launch of RVA Street Art Festival, a two-year gallery along the James River flood wall showcasing artists' work on 18-by-32-foot murals. Jon Baliles, later elected to City Council, and artist Ed Trask are among those helping push the project along, with Venture Richmond, Altria and the Greater Richmond Chamber.

The contrasting efforts make the message clear: The city has a lot to iron out if it is to become a real arts town, but it can be done.

The 161-acre project on the south side of car-clogged West Broad Street near Short Pump Town Center in Henrico County was built with the Birkenstock set in mind. It has villagelike townhouses, real sidewalks, walking-distance restaurants such as Bonefish Grill and a Whole Foods. Green-conscious residents can catch the bus to downtown. Hot knowledge-economy jobs aren't far away at massive business parks to the east and west, at Innsbrook and West Creek.

After slogging through the real estate crash, jackhammers come blasting again. New, $350,000-plus townhouses are selling, a gigantic Richmond ACAC fitness center opens and more trendy stores like outdoor goods retailer REI are on the way.

Sometime in the '90s, Ralph White started calling himself the manager of the James River Park System. As far as the city was concerned, he was simply a "level two recreation technician" — whatever that means. He says the title he gave himself didn't start to stick until sometime in the early 2000s. We're glad it did.

For 32 years White has stood tall, socks up to his knees, fighting for what's best for the city's leafy riverfront. As of last week he's retired, and it's going to be impossible not to miss him.

White is a rare kind of city employee: He's willing to buck rules and side-step oversight committees in order to commit good, accomplishing what would be impossible under the watch of order-minded city bureaucrats. White has let mountain bikers cut trails along the river's banks, helped kayakers pour boat ramps to make access easier and built a dedicated community around the park.

While bringing a vision to what was a troubled park system, he's never shied away from the hard and sometimes menial work necessary to implement it. The bearded, bespectacled 68-year-old has scrubbed rocks, cleaned bathrooms and picked up trash, helping remake the river into one of the city's best attributes.

Richmond got lucky with White. He came to Richmond in the late '70s chasing a girl, got involved with the James River and decided to stay. In the end he managed to introduce a new generation to the natural goodness that cuts through the center of the city. For that, all we can do is thank him, wish him well, and hope to heaven that the city manages to hire a replacement even half as dedicated as White.

We pat ourselves on the back for the river, and rightfully so. +5

So what if we stuffed the ballot box? When Outside magazine asked if we thought we were the "best river town in America," we responded with a resounding, "Yes, whatever, all I have to do is click the 'like' button?"

Three months and 9,351 votes later, we'd blown our competition out of the water. (Take that, Hood River, Ore., and your pathetic 2,851 votes.) Next thing we know we're on Outside's October issue and city leaders are promising an economic windfall.

Far be it from us to question another magazine's methodology.

The mayor sets up the Skins and buries the Squirrels. -2

He wins the election convincingly. But it doesn't take long before Mayor Dwight Jones is back to his fumbling ways. In early November, the deal to build the Washington Redskins' $9 million training camp facility begins to fall apart. The deal hinges on a land-for-sponsorship swap with Bon Secours, which pledges to put up $6.3 million for the Redskins' camp in exchange for the right to develop the former Westhampton Elementary School in the West End.

The Jones administration is accused of cutting a bad deal for the city — the Westhampton property is assessed at $7.5 million; in the original deal, Bon Secours agrees to pay just $300,000 to lease the property for 60 years. What do the Redskins put up? Nothing. (The city, in fact, agrees to pay the Skins $500,000 a year to practice here.)

Meanwhile, the Richmond Flying Squirrels scrounge for nuts. The only professional sports team that has invested in Richmond can't even get the region to kick in a few bucks to keep the lights on at the dumpy old Diamond. That new stadium they were promised three years ago? The fat lady is warming up.

While some signs may say "closed for remodeling," the harsh reality is that the local Hooters locations have filed for Chapter 11 bankruptcy. With the impending doom looming over the tacky, yet unrefined restaurants, patrons craving the opportunity to gawk at boobs while eating subpar food are forced to enjoy the buffet cuisine offered at local gentlemen's clubs.

The mayor paddles the School Board. +2

Disingenuous? Perhaps. Results-oriented? Not exactly. But when Mayor Dwight Jones kicks off the new year blasting himself and the School Board for participating in "celebrations of mediocrity," we have a moment.

After a tough three years in office, Jones feints and catches the School Board with a nasty hook. He creates a school-efficiency task force that publicly dresses down the board and the superintendent. He brings in the business community's favorite former city manager, Bob Bobb, to join the party.

It works politically. The attention shifts away from Jones and what he's been unable to accomplish. His only obstacle to re-election is an unknown real estate agent who barely gets on the ballot. His biggest obstacles on City Council, Bruce Tyler and Marty Jewell, are swept out by the rising tide.

Jones has some political game. Now, if he could just govern. ...

Editors' note: This version reflects a correction to the print edition, correcting numbers to the $50,000 loss in sponsorship that affected the Richmond Folk Festival.