It starts almost as a joke. After the University of Richmond and Virginia Commonwealth University make the NCAA tournament — both selected to the Southwest Region — the idea of the Rams and Spiders playing one another becomes a punchline.

Or is it more of a strange, unlikely dream? VCU didn't belong in the tournament. UR did, but few observers had selected the university to advance to the Sweet 16. But there they are in San Antonio. 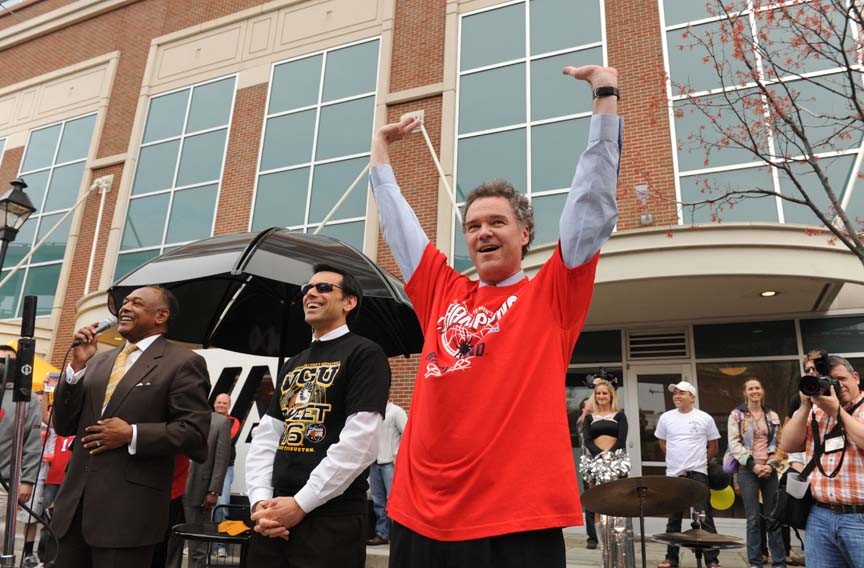 For the better part of a week, Richmond as Hoopstown USA defines March Madness. ESPN's deadpan comedian, Kenny Mayne, stands atop Church Hill, turning the moniker into satire. UR loses to the University of Kansas, the region's No. 1 seed and favorite to win it all, which then gets thumped by VCU in the Elite Eight. The Rams go on to the Final Four, becoming perhaps the greatest underdog story in tournament history. But VCU hardly plays like an underdog.

Virginia Commonwealth eclipses its cross-town rival, becoming the most unlikely Cinderella on the way to the Final Four. The team goes to the ESPYs. Visits the White House. Coach Shaka Smart, and his little-man strut, becomes the celebrity coach of the moment.

For one week, VCU and UR put Richmond on the map. One needed the other. There would be no Hoopstown without both.

And we won't soon forget. For once, Richmond is in the spotlight for something other than Confederate month declarations and "Daily Show" spoofs. And the capper? Both Smart and UR head coach Chris Mooney turn down other offers — and more money — to coach elsewhere.

They had their shining moments — and chose us.

A boy wanders into the woods, and we don't lose hope. +10

While the number of volunteers searching for Robert Wood swells past 3,000, and the nights grow colder, it seems like a lost cause. Wood, an 8-year-old who is autistic, wanders off during a family outing at North Anna Battlefield Park in Hanover County Oct. 23. For five days, search and rescue teams comb the woods of the rural county.

The streaming-news updates and social media chronicling the effort grow dire, but hundreds of volunteer searchers don't lose hope. Forget the horror of a little boy alone in the woods at night, with temperatures dipping into the low 40s. He needs his medication, food and water.

One finds him, curled up in the fetal position, in a gulley less than a mile from where he wandered off. He's alive and relatively stable. After a few days in the hospital, he returns home as healthy as a toad. Experts say his autism helped him survive, probably keeping him unaware of his predicament.

Happy endings? We don't get many. But this one should last us a while.