+8 Baseball returns to the inner city.

Baseball may have lost its relevance in the inner city, but on one dusty summer afternoon the Mosby Spartans hoist the championship trophy. The team, made up of 8- to 10-year-olds, beats the Hotchkiss Eagles, 5-3, at Hotchkiss Field off Brookland Park Boulevard in early June.

The victory itself is unremarkable, but consider: The team, made up of players from the Fairfield and Mosby housing projects, didn't exist four months earlier. And for most of the players it's their first exposure to baseball.

For one fleeting summer, a group of inner-city boys discover a new love for a game their fathers and grandfathers played, a game that broke barriers in the civil rights movement and offered renewed hope for what could be.

The fall of developer Justin G. French plays out in Shockoe Slip as if on a movie set. Agents with the Federal Bureau of Investigation, the Internal Revenue Service, state police and the U.S. Marshals Service descend on French's offices on Cary Street on Aug. 5, loading up a moving van with boxes and computers. French is arrested a week later, charged with eight felony counts of forgery and falsifying public documents.

Oh, there's more. More of French's background comes to light, like his move here in 1996 after a stint in federal prison for firearms and cocaine trafficking. Within a few years he's risen to the top of the real estate development food chain. Even Markel Corp. invests in his projects, in exchange for state and federal tax credits. Almost overnight, French is a regular on the country club circuit.

It seems that French, who dabbles in the lucrative business of historic tax credits, used the credits to finance projects, some of which allegedly weren't completed. The Bank of Hampton Roads, for one, files suit, charging that French received $15 million in loans for work that wasn't finished on apartment projects in Scott's Addition.

While French ducks and covers, every developer in town clutches his accountant a little closer. For years there have been rumors and speculation that the historic tax credit program, which allows developers to use up to 45 percent of a construction project's value as financial equity, is ripe for abuse. It's the state Department of Historic Resources that contacts authorities after French's projects start to smell fishy, launching the investigation. French heads back to court Jan. 25. However it shakes out in 2011, the French case threatens to cast a pall over the city's real estate renaissance of the last 20 years. 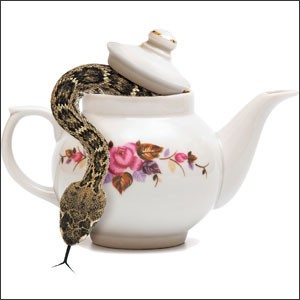 +3 The tea party wakes us up from political slumber.

Now that the midterm election hangover has worn off, it's natural in your newly sober state to wonder about this thing called the tea party, which hit us upside the head like too many shots of tequila.

Consider the estimated 3,500-plus tea party “patriots” who show up at the Richmond Tea Party's Tax Day Rally on the Kanawha Plaza April 15. Leaders talk in broad strokes about government accountability and fiscal responsibility. Is it a party or a grass-roots movement? Has it come to take our earmarks or our Earl Grey? Members don't seem to have a singular focus. But they do know they want change, and for one as of yet fleeting election cycle, they have a ton of the most significant political currency: buzz.

Jamie Radtke, a veteran conservative activist, is voted president of the Richmond Tea Party, and the Greater Richmond Convention Center plays host to the first Virginia Tea Party Patriots Convention, a red-white-and-blue spectacle that draws thousands (a slogan: “The Constitution still matters”). Even the GOP mainstream (Gov. Bob McDonnell, among them) must attend to show its respect. Afterward, Virginians boot Tom Perriello and Glenn Nye from the state's Congressional delegation. Tea party participation is undeniable. With a political year ahead, we'll be watching to see if this boiling pot continues to steam.

-7 We miss the train. And the bus. And our flight to New York.

Richmonders drive more miles each day than people anywhere else in the state, including Northern Virginia. But the horseless carriage is so 20th-century — can't we figure out some better ways to get from Point R to Point B?

Business boosters continue to push for high-speed rail to Washington and points south. Trouble is, it may cost $6 billion or more to get true, 110-mph, high-speed rail from Richmond to D.C. Richmond loses major federal funding to North Carolina.

JetBlue, Richmond's fare princess, announces in September that it's ceasing service to John F. Kennedy International Airport in New York City because the route's not profitable. The Greater Richmond Chamber of Commerce scrambles to mount a Save Low Fares campaign, telling travelers to choose low-cost carriers or lose them.