The Roads We Traveled

Richmond's galleries and museums are striking out on a common theme this fall.

If you're anything like me, the essence of the word travel exudes exploring, memory-making and unbridled excitement. As an idea, it's romantic in the best sense. Pick up and go. Get on the road and follow one path after another until you find something — or someone — new and unknown.

Beginning this month, Richmond art galleries collectively take up travel as an idea in various ways. Some such as the Virginia Museum of Fine Arts' "Forbidden City: Imperial Treasures from Palace Museum, Beijing" (Oct. 18-Jan. 11), allow for an immersive cultural dialogue: educational programs for children and adults, dining events and international exhibition exchanges. For a list of the numerous associated events, see the museum's website.

Travel is less explicit in others. "Forecast," at the Anderson Gallery through Dec. 7, features six artists who discuss escalating environmental disasters and their impact across the globe. A talk with sculptor Mark Dion is planned for Sept. 18 at the University of Richmond.

Speaking of Virginia Commonwealth University, its newest art venture, the Depot Gallery, offers its official inaugural show, "The Tapia Twins: Bringing Together Art and Medicine," through December. Chronicling the separation of conjoined twins Maria and Teresa Tapia, the exhibit tells the compelling story of their journey at VCU's Children's Hospital.

Another newer gallery, Sediment, explores narratives related to travel in three exhibitions of mixed-media work: "Smoke Signals" in September, "Expanded Cities" in October and "Goldrush" in November. Each investigates pathways of dissemination and communication while sifting through cultural information to reveal the present. To complement the work, the gallery will hold a series of experimental music performances.

Communication also is explored in two of the exhibitions opening at Artspace on Sept. 26, a night that kicks off five exhibitions in the large space. "This Is Just Mail Art" and Dan Mouer's "Gone Postal" celebrate Ray Johnson's mail art, which began in the 1960s. An exchange initiated by Mouer, the first part presents 75 artists from 25 countries who responded to an international call for art; the second part presents a selection of works made by Mouer.

Two-dimensional work continues to reign supreme, as shown by two painting group shows: Reynolds Gallery's "Taking Off: Hot New Painters" and 1708 Gallery's "Point of Departure." Both showcase the work of young painters fresh out of masters degree in fine arts programs across the country. 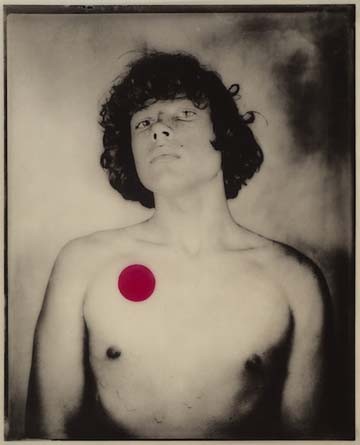 Yet the two diverge in their focus. Reynolds highlights abstract work while 1708 features representational paintings. In each, artists travel to the past to investigate art -historical tropes in new ways. With a commitment to the language of painting, works such as New York-based Sharon Madanes' "Mr. Locks," which has an embedded video camera in the canvas, question the spectator's role while addressing current debates. The gallery has invited the artists to participate in a panel discussion Sept. 26.

Travel takes on a different meaning in "Christa Blackwood: a Dot Red," which runs at Candela Books and Gallery through mid-October. There, travel becomes a political, gendered act in a series of photographs with Blackwood entering the landscape or portrait through the insertion of a red dot. A transcontinental symbol of femininity, Candela says the red dot signifies "a contemporary portal for examining our conditioned perspectives of gender, history and the image."

In each form, travel becomes a way of accessing and digesting the rich, cultural world around us. Requiring a fresh look, travel offers innovation and excitement to those who seek the journey or the story rather than the destination.